Veteran Defender Re-Signs for his Fifth Season with the Kickers 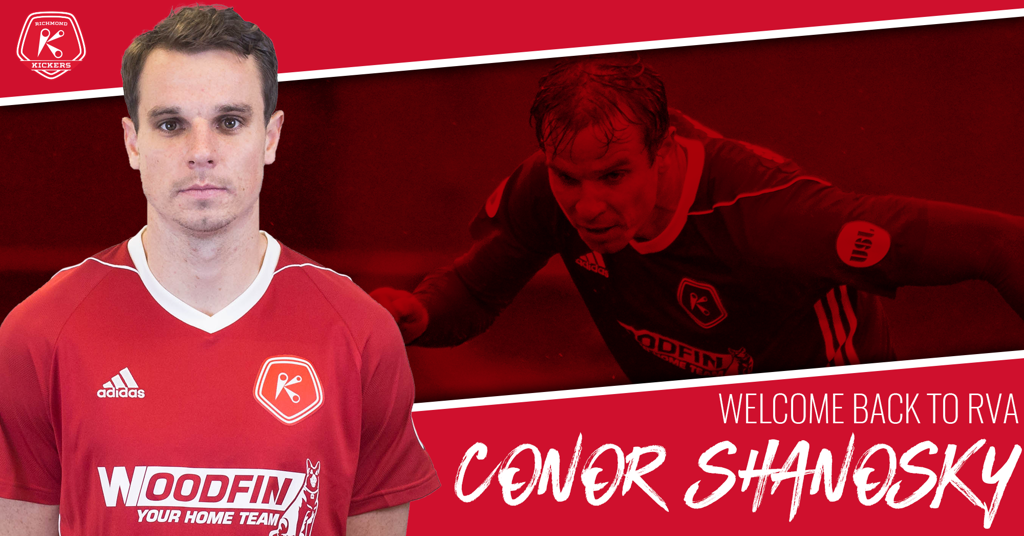 RICHMOND, Va. – (Wednesday, February 20, 2019) – The Richmond Kickers are pleased to announce the re-signing of defender Conor Shanosky for the 2019 season, pending USSF and USL League One approval.

“I don’t think there’s a more experienced Center Back in USL League One or the USL Championship,” said David Bulow, Kickers Head Coach. “He’s a veteran that knows how important the Kickers are to the city of Richmond off the field and is a perfect fit to our style of play on the field.”

Over the last two seasons, Shanosky has made 42 appearances, starting in 38 matches and scoring one goal and notching an assist. Prior to the 2015 season, Shanosky signed with USL Championship expansion franchise Louisville City FC where he amassed 3,267 minutes over two seasons. Making 26 appearances in 2015, he tallied more goals than any other defender with three on during the club’s inaugural season, helping Louisville to a second place finish in the USL Championship Eastern Conference. He made 15 appearances in 2016 and added one goal before being released to sign with Richmond where he went on to make three 2016 appearances.

“I am excited to be back in Richmond for another year,” commented Shanosky. “With the staff and new ownership, there is a lot of ambition for this club to really succeed in USL League One and I think with the Red Army there’s no reason why Richmond can’t be the best place in the league to play!”

Signed by D.C. United as a Homegrown player in 2010, Shanosky spent the majority of the 2013 and 2014 seasons on loan in Richmond. Anchoring the Kickers back line to the best defensive record in the league en route to the 2013 Regular Season Championship title, he made 35 appearances in a Kickers uniform over two seasons. Integral on both sides of the ball, the native of Potomac Falls, Virginia added three goals while contributing to 15 shutouts.

“Conor has lots of good qualities including his passing which helps us build out of the back, his height for winning aerial duels and his seasoned professionalism,” added Matt Spear, Kickers President. “I also admire that despite signing as a pro with D.C. United out of high school, Conor has since earned his college degree online.”