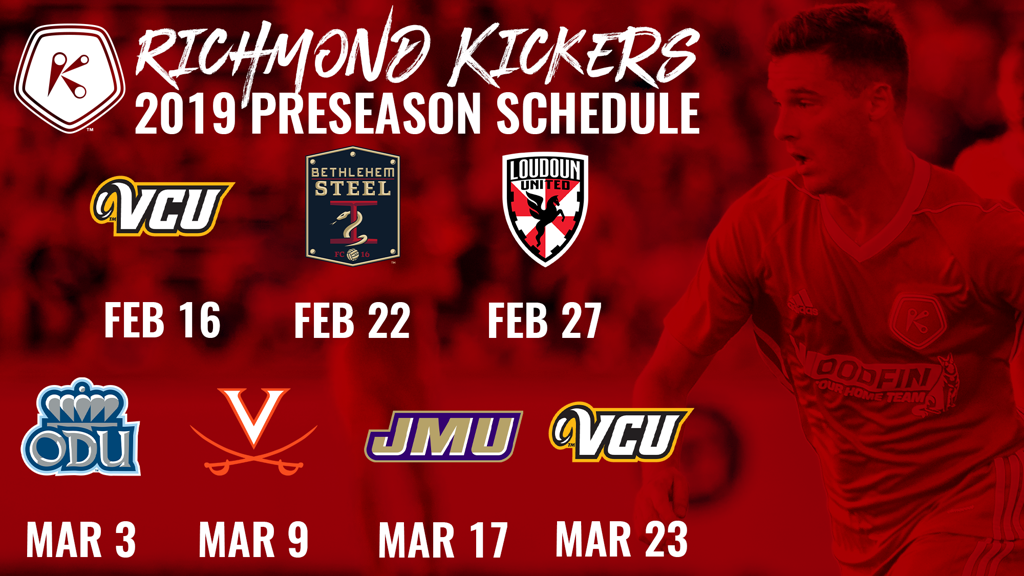 RICHMOND, Va. – (Tuesday, January 29, 2019) – The Richmond Kickers are pleased to announce the 2019 Preseason Schedule, with a slate of six games kicking off February 16.

"The combination of it being nearly four months since the last time I was on the field coaching and watching the 2019 roster start to take shape, I am getting very excited for the beginning of preseason,” said Kickers Head Coach David Bulow. “Having been appointed the new head coach in the middle of the season last summer, it felt a little bit like I was trying to jump on a treadmill that was running at full speed! I’m really looking forward to take the time build a team thats competitive and entertaining, one that the Richmond area soccer community will be proud to watch.”

The first match of the 2019 Preseason is set for Saturday, February 16 as the Kickers host the first of two match ups against Virginia Commonwealth University. Six days later, the Kickers will travel to Leesburg, Va. to face USL Championship side Bethlehem Steel FC. The Kickers return to RVA March 3 to host Old Dominion University and Kickers legend and now ODU assistant coach William Yomby.

Highlighting the 2019 Preseason Schedule, the Kickers will open up City Stadium to host NCAA powerhouse University of Virginia. Tickets will be $5 and available soon on RichmondKickers.com. The gates will open at 3:00 p.m. with food trucks and craft beer on tap! Kickoff for that match is set for 4:00 p.m.

Closing out preseason, the Kickers will host 2018 NCAA Elite Eight participant James Madison University March 17. The final match will be the second meeting against VCU March 23. Both of those matches will be hosted at Ukrop Park.

“I’m also very grateful to continue the relationships with the men’s soccer programs of VCU, ODU, JMU and UVA,” Bulow continued. “They not only provide good opposition, but hopefully it also provides motivation for the next generation of the Richmond Kickers Pro soccer team.”