Midfielder Becomes Fourth Player Signed by the Kickers for 2019 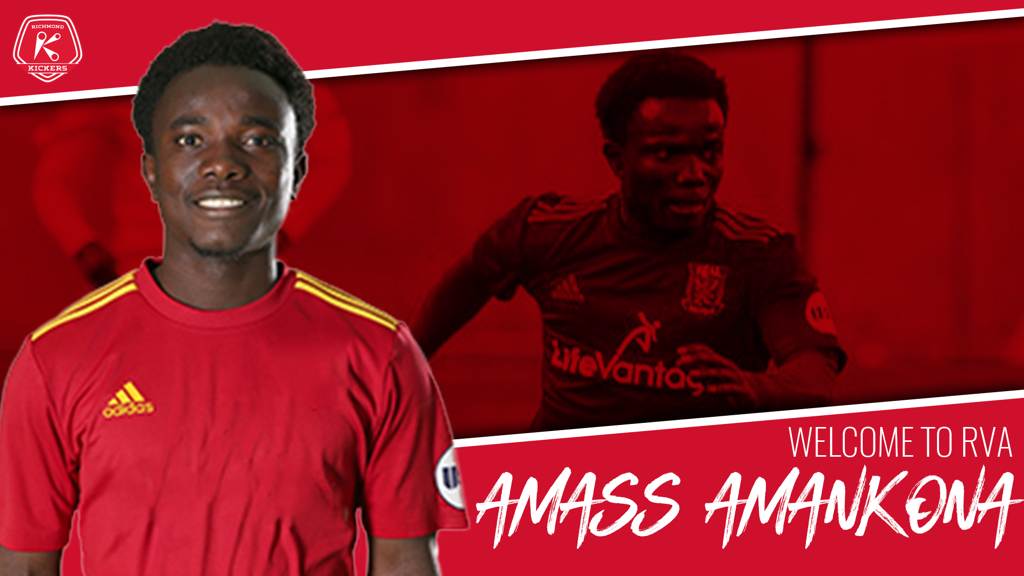 RICHMOND, Va. – (Friday, January 4, 2019) – The Richmond Kickers are pleased to announce the signing of Ghanaian midfielder Amass Amankona for the 2019 season, pending USSF and USL League One approval.

“Amass is a player that I tried to sign last season, but it didn’t quite work out,” said Kickers Head Coach David Bulow. “He is a highly recommended and talented midfielder who has shown great desire to be a part of the new Richmond Kickers Pro team and I can’t wait to start working with him."

The native of Kumasi, Ghana is coming off the 2018 season with USL Championship side Indy Eleven. Prior to joining Indy, Amankona played for the Dayton Dutch Lions, where he would make 11 appearances. Amankona was drafted 46th overall at the 2016 MLS SuperDraft by Real Salt Lake. The Ghanaian became a consistent force for the RSL USL Championship affiliate Real Monarchs over 26 matches that season.

“I am very familiar with Amass from when he starred at University of Dayton as a top player in the Atlantic 10 Conference,” added Kickers President Matt Spear. “No surprise he was drafted in to MLS. He had an excellent rookie season at the Monarchs and he’s ready and determined to be a vital player here in Richmond. Plus, Amass is a super friendly, deep young man with whom fans folks across RVA will believe in.”

Amankona played three seasons at the University of Dayton after playing one season at the University of Ghana. He made 61 appearances for Flyers, netting 23 goals. At Dayton, Amass was named the Atlantic 10 Conference Most Valuable Player and Midfielder of the Year as well as First Team All-Conference and Academic All-Conference in his final season`. He was also a semifinalist for the MAC Hermann National Player of the Year award. During his senior season, he joined USL League Two side Charlotte Eagles, going on to score three goals in 14 matches.

“I want to thank God for this opportunity to pursue my career and dreams and am grateful to the Richmond Kickers for this chance,” commented Amankona. “I can't wait to begin this fresh start with everyone in the organization.”

With Amankona’s addition, he joins three other players signed with the Kickers for the 2019 season: Josh Hughes, Scott Thomsen, and Braeden Troyer.