Veteran Defender is Back in Richmond for Fifth Season 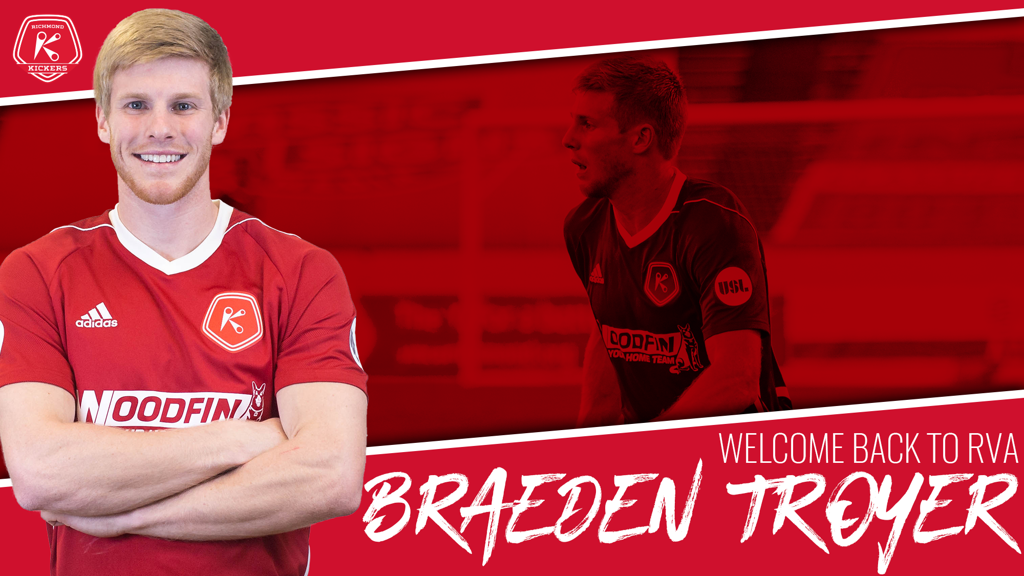 RICHMOND, Va. – (Tuesday, January 1, 2019) – The Richmond Kickers are pleased to announce the re-signing of defender Braeden Troyer for the 2019 season, pending USSF and USL League One approval.

“Braeden is one of the most versatile and effective defenders in all of the USL,” said Kickers Head Coach David Bulow. “The loss of Braeden through injury last season was a major blow to the team, and we are delighted that he has decided to come back to Richmond for the 2019 Season. Braeden’s experience and professionalism will be a huge asset to our up and coming young players in the club.”

After four seasons, Troyer has made 116 appearances in a Kickers shirt, adding two assists. In 2018, he amassed 2336 minutes over 27 matches including scoring his first professional goal in a friendly match against LaLiga’s RCD Espanyol.

“I am energized by the changes that are taking place in the club, and I can’t wait to be a part of the transformation being made by the new owners and coaching staff,” commented Troyer. “With the Red Army leading the way, I know that everyone who comes to City Stadium will make lasting memories and see what the RVA community is all about.”

Troyer impressed at the Kickers 2015 Pro Combine, earning his first professional contract after the three-day event.  A four-year starter, a three-time Conference USA Academic Medal winner as well as a three-time member of the league's postseason teams, Troyer helped the Gamecocks to a C-USA crown in 2011 as well as an NCAA Tournament appearance that season.  As a senior, the native of Columbia, SC played every minute of the season and anchored South Carolina’s defense that posted three shutouts while adding one assist.

“I am thankful that God has given me the opportunity to continue playing this beautiful game,” added Troyer. “The importance of my wife’s ongoing support along with the encouragement from my family and friends in this unconventional career path can not be overstated. I truly appreciate the Kickers’ trust in me as a player on the field and as a representative off the field.”