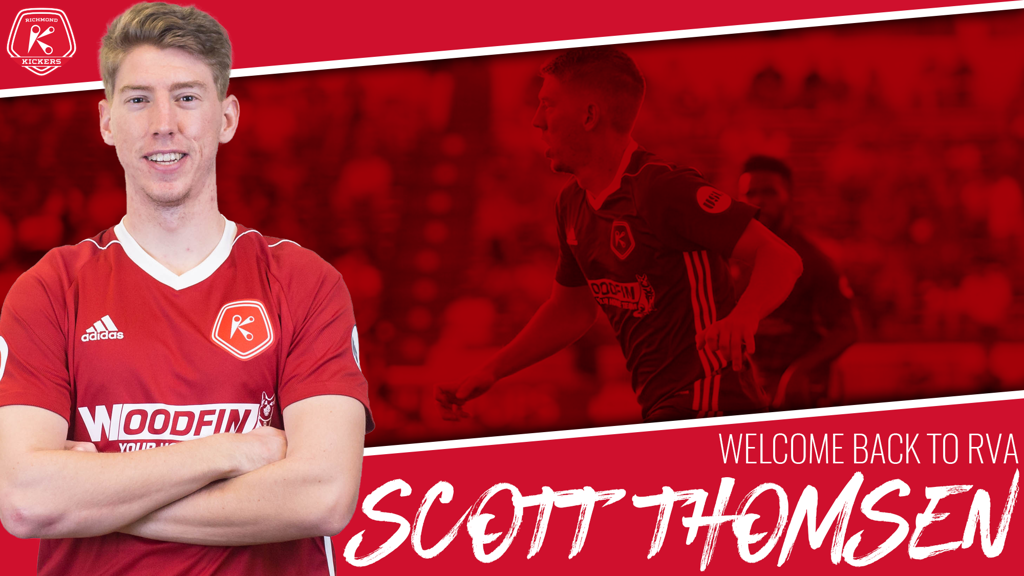 RICHMOND, Va. – (Friday, December 28, 2018) – The Richmond Kickers are pleased to announce the re-signing of defender Scott Thomsen for the 2019 season, pending USSF and USL League One approval.

"Scott is a player that brings a lot of experience and USL Championship level quality,” commented Kickers Head Coach David Bulow. “He has shown a great desire to be part of our evolving organization, and his leadership will be invaluable to bringing glory back to the Richmond Kickers.”

“I’m thankful and humbled to re-sign with Richmond,” said Thomsen. “There are so many exciting things happening around the club with the new ownership group and new league. I am grateful to David [Bulow], Matt [Spear], and Rob [Ukrop] for believing in me and trusting me to be a key part of this new era in the Richmond Kickers history. I can’t wait to be back at City Stadium and be a part of performances and wins the Red Army and the RVA community can be proud of again.”

Previously, the native of Brick Township, New Jersey, was signed by Major League Soccer’s New York Red Bulls as a Homegrown Player in December 2015 following a standout collegiate career at the University of Virginia.  Claiming the 2014 NCAA Championship, he started 56 of 66 career matches and was a two-time ACC All-Academic Team honoree.  One of 30 candidates for the Senior CLASS Award, he led the team in assists during his freshman and junior years, finishing with three goals and 18 assists over four seasons.

An early birthday present and a late Christmas present for the @RCRedArmy! Excited to be back in RVA for a new era in @RichmondKickers history. Can’t wait to be back at City Stadium. #RVAisRED https://t.co/XHoBW9UlIg