Gates Open at 5:30PM for RVA is RED Night, Kickoff at 7PM 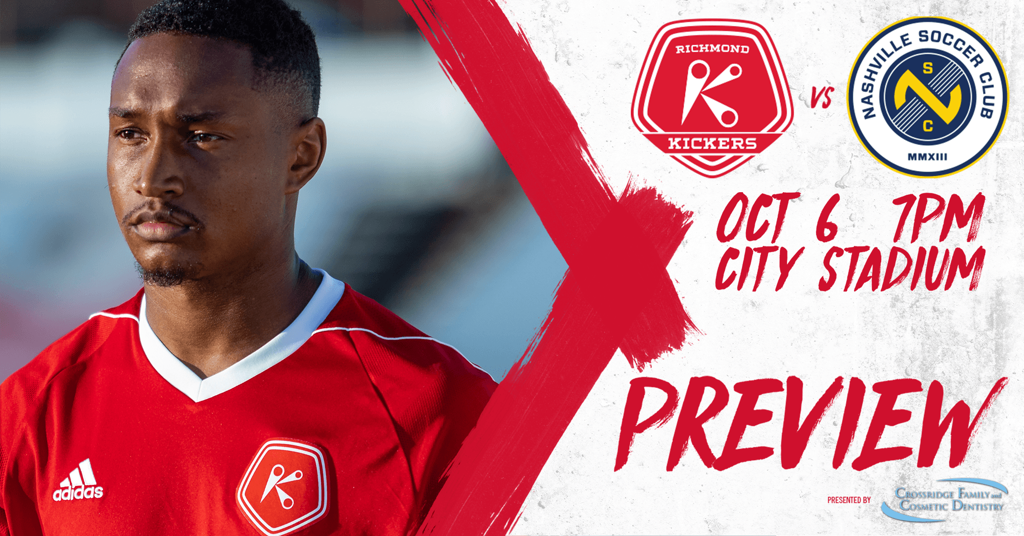 RICHMOND, Va. – (Friday, October 5, 2018) – The Richmond Kickers (6-22-4) will close out the home portion of their 2018 schedule Saturday night as Nashville SC (11-9-11) comes to City Stadium. Saturday is RVA is RED Night when the party starts at 5:30 p.m. with live music from The Cary Street Ramblers, RVA food trucks and over 20 craft beers on tap. Fans that wear red to the game, the Kickers will buy their first drink. The match will be available to stream through ESPN+. Tickets are on sale now at RichmondKickers.com.

This match will be the second meeting between the two clubs, and the first at City Stadium. The Kickers made the trip to Nashville back on August 24 at First Tennessee Park. Tucker Hume put Nashville ahead three minutes before halftime from Michael Reed. Bradley Bourgeois scored the second for the home side in the 48th minute. A third goal would come from Matt LaGrassa in the 57th minute. A brace from Tucker Hume would round out the scoring for Nashville three minutes later.

Richmond is coming off a narrow 2-3 defeat on the road to North Carolina FC last Saturday night. The Kickers got on the front foot with Prince Agyemang putting away a defected pass from Austin Yearwood in the 30th minute. NCFC responded nine minutes later with Kyle Bekker leveling the score. Just before halftime, Heviel Cordovés scored his seventh goal of the season, tying him with Brian Shriver, who assisted on the goal. Despite the halftime advantage, goals from Austin da Luz and a brace from Bekker downed the Kickers at Sahlen’s Stadium.

Nashville battled to a 1-1 home draw with New York Red Bulls II at First Tennessee Park Saturday night. Amando Moreno gave NYRB II an early lead, scoring just five minutes into the match. The visitors drew a penalty after Taylor Washington is called for a foul on Andrew Tinari. Tom Barlow stepped up and had his penalty saved by Nashville keeper Matt Pickens in the 14th minute. NYRB II were reduced to ten men when José Aguinaga sees a straight red card for a studs up tackle in the 24th minute. Nasvhille immediately responded and Michael Reed scored the game tying goal two minutes later.

The Kickers will close out the 2018 USL season next Saturday night as the team heads down to face Atlanta United 2 at Coolray Field. This match will be available locally on WTVR CBS 6.3 (Comcast 206, Verizon FiOS 466) and streaming online on ESPN+. Keep up to date with the Kickers at RichmondKickers.com.

Richmond: Midfielder Prince Agyemang (#38) score his first goal for the Kickers last Saturday at North Carolina FC. The Right to Dream Academy product signed with the Kickers late in the season, having made eight appearances and made five starts since joining the club. Defender Mekeil Williams (#55) made five critical blocks against NCFC. The Trinidad and Tobago international has made 26 appearances and recorded 103 clearances and 19 blocks this season. Defender Austin Yearwood (#3) made an incredible run up the left side of the field to set up for the goal for Prince Agyemang. Yearwood joined the Kickers this season from the Charlotte Independence and has played in 19 matches, all of which were starts.

Nashville: Midfielder Michael Reed (#17) scored his first goal of the season last Saturday as Nashville drew New York Red Bulls II 1-1. Reed has played in 28 matches this season and has added five assists, including three in the 4-0 victory over the Kickers back on August 28. Defender Liam Doyle (#5) was named to the USL Team of the Week after 22 clearances, three blocks and an assist against NYRBII. Doyle joined Nashville for their inaugural season, going on to play in 29 matches with one goal and two assists. Forward Brandon Allen (#32) is tops in Nashville in scoring with eight goals this season in 26 appearances. Allen came in after the start of the season from Bethlehem Steel FC, where he scored two goals on the Kickers in the 2018 season opener.