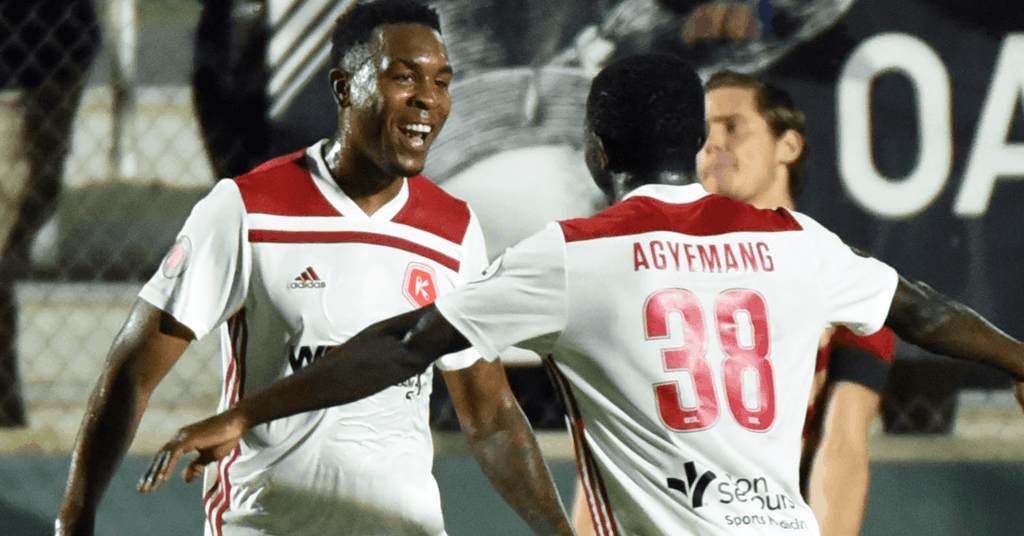 CARY, N.C. — (Saturday, September 29, 2018) — The Richmond Kickers (6-22-4) fell short in a narrow defeat on the road at North Carolina FC (12-11-8) Saturday night at Sahlen’s Stadium. Prince Agyemang scored his first goal for the Kickers to put the team ahead in the 30th minute. Kyle Bekker leveled the score for North Carolina in the 39th minute. Heviel Cordovés scored in his second straight match to put Richmond ahead 2-1 just  before halftime. NCFC would take the victory behind second half goals from Austin da Luz and a second from Bekker to take all three points.

NCFC put the pressure on early to get a chance in the 4th minute. Austin Yearwood tried to switch the play to get the ball over to the right side. Kyle Bekker jumped on the loose ball and started a run towards goal. Austin da Luz looked for the overlapping run, instead Bekker went for a shot on target. Trevor Spangenberg leaped to his left to get a hand on the ball to tip it over.

Mekeil Williams came up with two massive blocks in the 10th minute to keep North Carolina off the board. Aarón Guillén found Tiyi Shipalane out wide on the right flank. He looked up and picked out Zach Steinberger at the far post, but Williams is there to head the ball away. Kyle Bekker picked up control of the loose ball out on the left side and squared a pass to Austin da Luz. He plays a quick pass to Steinberger and left the ball to da Luz making the run inside. Williams got his body in the way of the shot that the Kickers then clear from danger.

Richmond found the breakthrough in the 30th minute through Prince Agyemang. Austin Yearwood brought the ball up the left sideline. He cut inside near the end line, splitting two NCFC defenders to set up a chance to get the ball inside. His target was Heviel Cordovés, as Wuilito Fernandes got a touch to the ball and ended up putting it into space in front of goal. Agyemang made no mistake putting it past Alex Tambakis for the opener.

North Carolina leveled the score just nine minutes later through Kyle Bekker. Austin da Luz played the ball out wide for Zach Steinberger out wide on the right side. He sent in a cross that looked to be for Donovan Ewolo, right as Mekeil Williams leaped to meet the ball and try to head it away. Trevor Spagenberg also went for the ball and missed it. The ball slipped through for Bekker at the far post and he just needed to redirect it in for the equalizer.

Heviel Cordovés scored in his second straight match in the 44th minute to put the Kickers back in front just before halftime. Brian Shriver picked the pocket of Graham Smith. He had no pressure and was able to set up a through ball for Cordovés inside the NCFC box. The Cuban powered a shot at the near post under a diving Alex Tambakis and into the back of the net.

NCFC tied it up once again in the 61st minute. Kyle Bekker came over to take a corner kick from the right side of the field. His cross came in to pick out Austin da Luz at the six-yard box, right in front of goal. He got his head to the ball and redirected it towards the far post to pull level for the second time in the match.

Kyle Bekker netted a brace to put NCFC ahead in the 73rd minute. DJ Taylor sent the ball out wide on the right side for Tiyi Shipalane. He played a cross over for Bekker on the left side in plenty of space. With no immediate pressure, Bekker took a touch inside and then went for the shot that skipped under Trevor Spangenberg and into the far post for the third goal of the night for North Carolina.

The Kickers were reduced to ten men in the 79th minute. Luiz Fernando played a perfect through ball for Heviel Cordovés just inside the NCFC box. As he was trying to get space around Connor Tobin, the North Carolina defender clipped the foot of Cordovés. The referee deemed the play a dive and issued Cordovés his second yellow card of the night.

Brian Shriver and Yudai Imura nearly capitalized on a mistake at the back to try to draw level in the 81st minute. Shriver made no mistake dispossessing Wuilito Fernandes and making a run on goal. He took a touch around Connor Tobin to create some space, and as Alex Tambakis was coming off his line, played a  pass for Yudai Imura making a run on his left. Imura tired to go for the one-time effort as Tambakis got a foot on the ball. Shriver tried to follow up on the deflected shot, but his effort sailed over the goal.

The Kickers come home to City Stadium October 6 for the final home game of the season for RVA is RED night as Nashville SC comes to town. Wear red and have a drink on us when the party starts at 5:30pm with live music by The Cary Street Ramblers, RVA food trucks and over 20 craft beers on tap. Kickoff for that match is at 7:00 p.m. and will be available live on ESPN+. Tickets are on sale now at RichmondKickers.com.