KICKERS DEFEATED ON THE ROAD AT CHARLOTTE 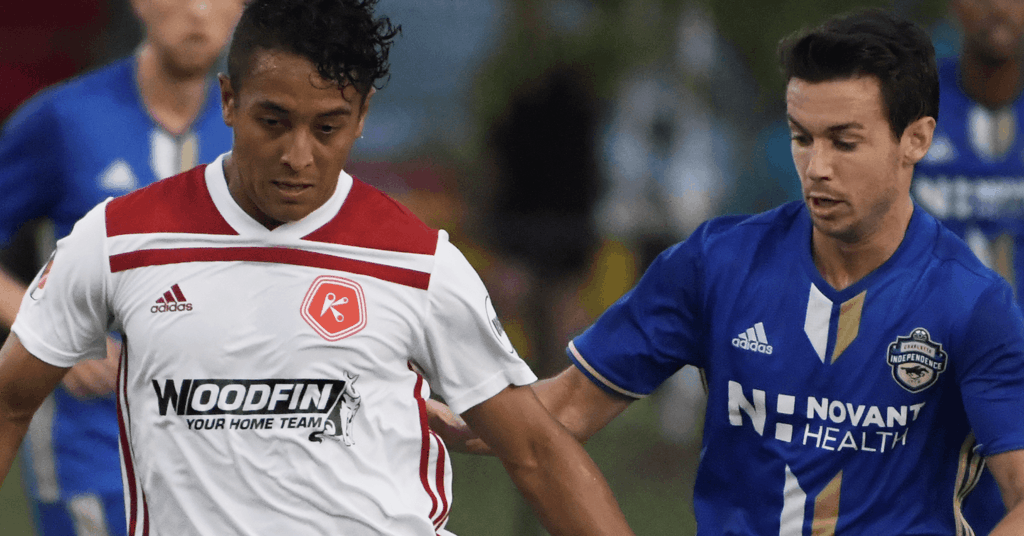 MATTHEWS, N.C. — (Saturday, September 8, 2018) — The Richmond Kickers (6-18-4) dropped a narrow 1-2 loss on the road against the Charlotte Independence (9-11-8) at the Sportsplex at Matthews Saturday night. Éamon Zayed opened the scoring in the 5th minute for Charlotte. Jake Areman doubled the lead for the Independence in the 58th minute. Raul Gonzalez scored his second goal in as many matches to pull one back for the Kickers in the 72nd minute.

Charlotte went ahead early with a goal in the fifth minute. Alex Martinez collected the ball in the midfield and had Neil Hlavaty pressuring along with Mallan Roberts behind him. Martinez cut back towards the center of the field to get enough space to slot the ball through to Éamon Zayed, who was able to get in behind the Kickers backline and chipped it over Trevor Spangenberg for the opener.

Brian Shriver nearly answered right away in the seventh minute. Shriver pounced on a mis-played ball from Alex Martinez and turned towards the Charlotte goal. Martinez kept on Shriver pushing him towards the left side of the goal, as Shriver was able to get the space for a shot. Brandon Miller came off his line to block the shot away.

An acrobatic save from Trevor Spangenberg in the 36th minute kept Yann Ekra off the board. Ekra played a quick give-and-go with Alex Martinez to get inside the Richmond box. Shaking off Brandon Eaton, Ekra turned towards goal for the shot. Spangenberg leaped to get a hand on the shot to send it over the goal, conceding the corner kick.

Just a minute later, the woodwork came to the rescue for Richmond. Jake Areman sent in a corner kick to find the goalscorer Éamon Zayed at the back post. He was able to get a shot off at close range that bounced off the post and quickly cleared away by Mekeil Williams.

Trevor Spangenberg came up massive in the 57th minute. Alex Martinez got to the end line and cut back to lay the ball off for Conor O’Brien. He had enough space to put the ball on frame. Spangenberg went up and was able to get a full touch on the ball to put it up and over the goal.

Raul Gonzalez scored in his second straight match to pull a goal back for Richmond in the 72nd minute. Prince Agyemang played a quick one-two pass with Raul Gonzalez. Agyemang found an opening to feed the ball through to Yudai Imura at the top of the Charlotte box. James Kiffe slid in to try and disposes Imura, just after Imura was able to get the ball into space for Gonzalez to run onto and put over Brandon Miller and into the back of the net.

Brian Shriver looked for a long range effort in the 77th minute to try and get the tying goal for Richmond. Yudai Imura played the ball forward for Prince Agyemang on the midfield line. Agyemang sent the ball up the field for Shriver in space on the right side. With no Charlotte player coming to pressure him, Shriver went for goal from about 25 yards out that only found the side netting.

Deep into stoppage time, Austin Yearwood had a chance denied to try and get a second goal for the Kickers. Charlotte had pulled all eleven players back defending to try and preserve their lead. Brian Shriver had control of the ball at the top of the Charlotte box and turned to his left to find Yearwood in plenty of space. Kay Voser tried to come over an shut down the attack, right as Yearwood let a shot rip from just inside the box that Brandon Miller needed to punch away.

The Kickers will return home to City Stadium next Saturday night to host Ottawa Fury FC, along with Oktoberfest presented by the Hof. The party starts at 5:30 p.m. with authentic German oompah music by The Sauerkrauts, seasonal craft beers on tap and an all-inclusive Oktoberfest package for just $22, including access to the VIP Hof Biergarten, German food from the Hof, two Oktoberfest craft beers and admission to the game. Then, the Kickers will take on Ottawa at 7:00 p.m. Tickets are on sale now at RichmondKickers.com.