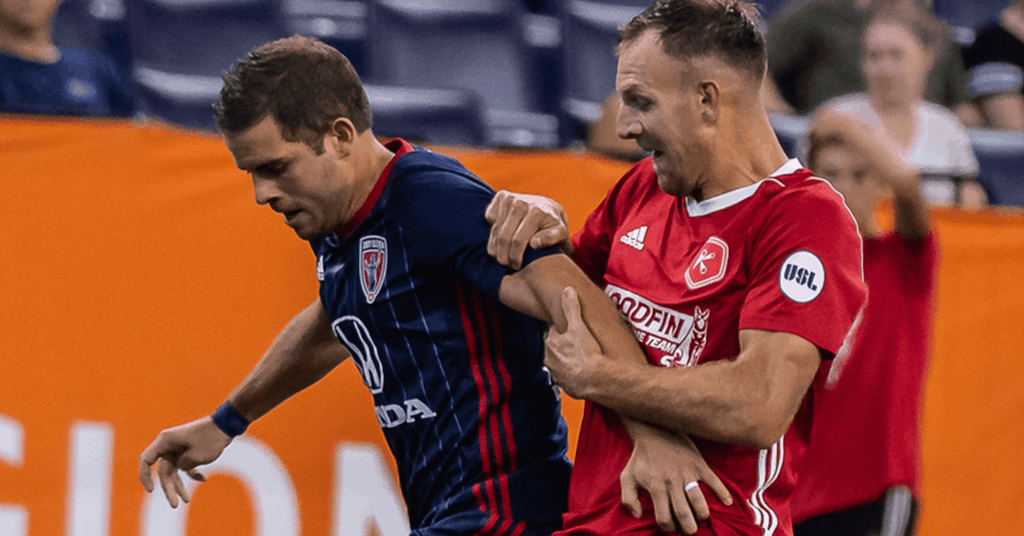 INDIANAPOLIS — (Saturday, September 1, 2018) — The Richmond Kickers (6-17-4) picked up a road point after a 1-1 draw at the Indy Eleven (11-7-9) at Lucas Oil Stadium Saturday night. Austin Yearwood set up Raul Gonzalez for the opening goal for the Kickers after just five minutes. Dylan Mares leveled the score for Indy in the 14th minute, splitting the points for both teams.

Richmond took an early lead in just the fifth minute from Raul Gonzalez. Oscar Umar played the ball out wide on the left for Austin Yearwood making the run up the left side. He quickly went for the cross into the box, nearly picking out Luiz Fernando making a near post run. The ball slipped through for Gonzalez in front of goal, who just needed to redirect it in for the opener.

Indy leveled the score in the 14th minute. Juan Guerra played a long ball to switch up play for Dylan Mares out wide on the left. He cut back trying to get around Brandon Eaton. Mares took a shot towards goal, as Spangenberg looked to make the stop. The ball slipped under the keeper and into the net for the goal.

Raul Gonzalez had a chance in the 24th minute to get Richmond back into the lead. Neil Hlavaty sent the ball up the left sideline for Luiz Fernando coming out to meet the pass. He found Gonzalez making a near post run, but the shot skipped just wide of the goal.

Soony Saad forced a save out of Trevor Spangenberg in the 31st minute. Jack McInerney was making a run towards goal. Neil Hlavaty came over to make the stop, as the ball popped free up for Saad. He made enough space to let a shot off that Spangenberg needed to leap and tip over the goal to keep it level.

Luiz Fernando set up Raul Gonzalez once again, with another good chance to try to gain the lead. Neil Hlavaty won the ball for the Kickers deep in their end of the field, getting it over to Austin Yearwood. He played the quick pass up the left side for Fernando, who made a massive run up the left side. Fernando then went for the cross to Gonzalez at the near post, again putting his effort wide.

A massive defensive stop by Austin Yearwood kept Indy from scoring in the 50th minute. Dylan Mares took a touch up field for Soony Saad. He touched it back for Mares as he continued his run up the left side. Mares whipped in a cross trying to pick out Jack McInerney. Yearwood came over and got a foot to the ball just before McInerney to clear it out of danger.

Indy came close to getting the go ahead goal in the 63rd minute. Karl Ouimette sent in a cross from the right side for Dylan Mares as he made a far post run. Mares tried to head the ball back across the front of the Kickers goal as Jack McInerney was making a run of his own. McInerney was able to get on the ball but ended up putting it wide of goal.

A minute before stoppage time, the crossbar came to the rescue for Richmond. Dylan Mares sprung Jack McInerney on a run in the center of the field. Mekeil Williams kept the pressure on McInerney as he went for a shot that came off the crossbar. Brandon Eaton met the deflected shot to head it out and away from danger.

A long range effort from Prince Agyemang forced a save out of Owain Fôn Williams in stoppage time. Luiz Fernando was able to keep control of the ball on the right side of the field. He quickly played a pass for Agyemang in plenty of space. He tried his luck from about 35 yards out, which Fôn Williams needed to knock down before picking up.

The Kickers will head south next Saturday night, as they travel to take on the Charlotte Independence at the Sportsplex at Matthews for a 7:00 p.m. kickoff. This match will be available to stream online through ESPN+. Stay up to date with the Kickers at RichmondKickers.com.