KICKERS SHUT OUT ON THE ROAD IN CHARLESTON 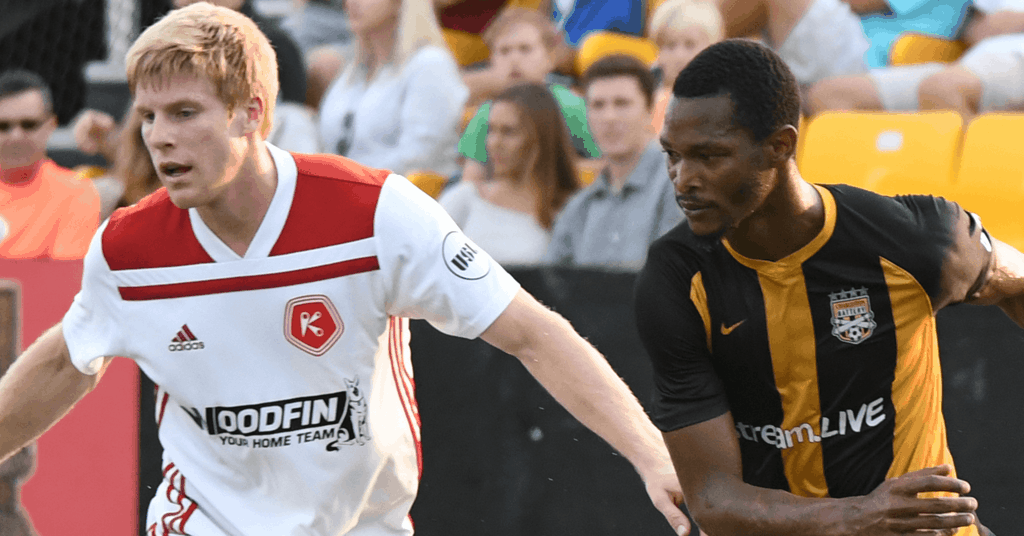 CHARLESTON, S.C. — (Saturday, July 28, 2018) — The Richmond Kickers (5-11-3) fell on the road to long-time rivals the Charleston Battery (10-3-8) Saturday night at MUSC Health Stadium. Two first half goals from Nicholas Rittmeyer, combined with a second half goal from Ataulla Guerra saw the home side claim all three points.

The Kickers had the first chance on goal ten minutes into the first half. Raul Gonzalez won the ball in the midfield and played a quick ball to his left for Brian Shriver. He turned up field and fed the ball up for Yudai Imura. He took his time coming across the top of the Charleston box. He combined with Fernando, who played the ball right back to Imura. His shot went wide of the Battery goal.

Charleston got on the scoreboard five minutes later through Nicholas Rittmeyer. O’Brian Woodbine took control of the ball in the center of the field, as he picked out Rittmeyer making a run up the left side of the field. With space, Rittmeyer put a shot on frame towards the far post. Travis Worra was able to get a hand on the ball, but it was not enough as the ball snuck into the net.

A free kick opportunity in the 31st minute nearly doubled the lead for the Battery. Gordon Wild stood over the free kick on the left side of the field, just outside the Richmond box. He whipped in a cross towards the top of the six yard box, just missing Nicholas Rittmeyer sliding through.

Braeden Troyer looked to set up an opportunity for Brian Shriver in the 37th minute. Raul Gonzalez played a long ball into the right corner for Luiz Fernando. He tried to get a cross in towards the near post as the Battery defense cleared the ball away and Braeden Troyer controlled. He took a quick touch up the sideline for Fernando. Pressured by the Battery, Fernando sent the ball back for Troyer. He took one touch to set up a cross in for Shriver. His header was right to Joe Kuzminsky.

Just before halftime, Nicholas Rittmeyer scored his second goal of the night for the home side. Jared van Schaik started the attack up the left side of the field. He played a long ball to the middle of the pitch for Ataulla Guerra. Guerra continued to shift the field finding Woodbine out on the right side. Woodbine played a low cross into the box as Guerra continued his run. Travis Worra made the stop before Guerra could get there, unfortunately leaving the ball in space. Rittmeyer stepped in a put the ball into the open net.

Ataulla Guerra put the Battery up 3-0 in the 51st minute. Leland Archer found the ball on the right side of the field and played it forward to Tah Anunga. Archer continued his run as Anunga left the ball for him. His first touch was a cross into the back post, finding Guerra there to head it into the back of the net.

Two minutes later, Raul Gonzalez nearly found the opening goal for the Kickers. Austin Yearwood quickly got the ball to Troyer in the Charleston end of the pitch. He sent the ball ahead for Shriver who took a touch trying to get around his defender. Gonzalez came in to the control the ball and went for the upper left corner of the Battery goal forcing a save out of Kuzminsky.

Brian Shriver had a chance form a free kick for the Kickers in the 65th minute. Fred Owusu Sekyere was brought down just outside the Battery box by Ataulla Guerra. Shriver stepped up to take the free kick. He went for goal as it sailed just over the net and out of danger for Kuzminsky.

Second half substitute Giuseppe Gentile came close for Richmond in the 77th minute. Fred Owusu Sekyere sent the ball forward from the center circle for Brian Shriver. He took a touch to get it up for Neil Hlavaty, who also took a touch to get the ball up for Luiz Fernando. He laid the ball off for Gentile as his shot went just high of the Charleston goal.

The Kickers were pressing for a goal with six minutes to go in the second half. Luiz Fernando tried to connect with Brian Shriver at the back post from the right side of the field. He could not get a clean shot off. He controlled the ball and played it back for Scott Thomsen. His cross in towards the towards the back post caused trouble for Kuzminsky forcing him to knock it away before it snuck into the top right corner. Luiz Fernando gained control the ball and quickly played it for Gentile, who tried to take it on the volley as his shot went wide.

Richmond are back in action Wednesday night as the travel to Highmark Stadium to face Pittsburgh Riverhounds SC at 7:00 p.m. This match will be available live on the Kickers Official Television Partners WTVR CBS 6 on their 6.3 sub channel (Comcast 206, Verizon FiOS 466) and streaming online at ESPN+. The Kickers return home to City Stadium next Saturday night as Bethlehem Steel FC comes to town for a 7:00 p.m. kickoff. Tickets are on sale now at RichmondKickers.com.