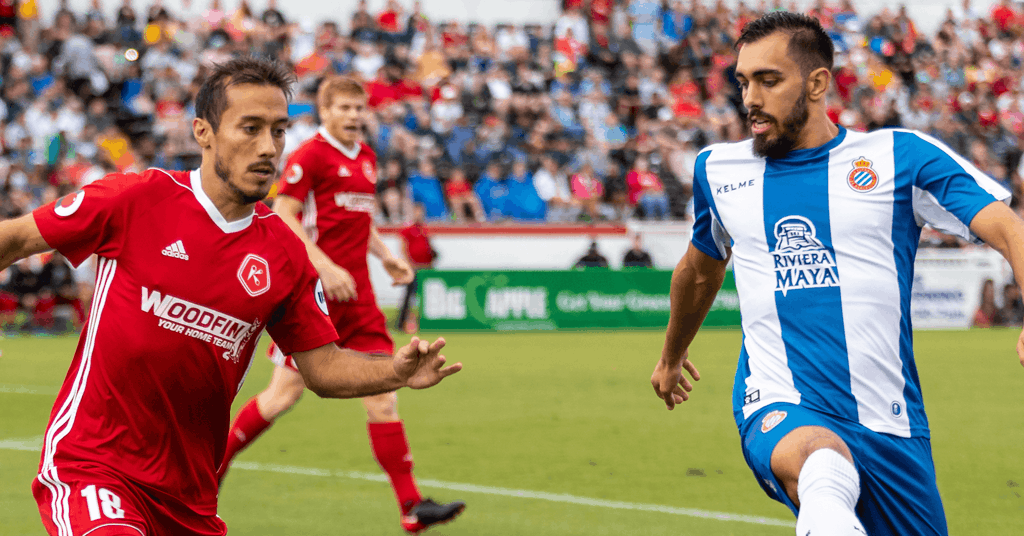 RICHMOND, VA — (Wednesday, July 25, 2018) — The Richmond Kickers fell 4-2 to RCD Espanyol in front of 7,356 fans who came to see the La Liga talent at City Stadium. Richmond flexed its muscles in the first half, scoring two goals off a Conor Shanosky header and a Braeden Troyer strike. The Kickers headed to the locker room with a 2-1 lead at the half. Espanyol eventually wore down the Kickers, adding three goals in the last 10 minutes. Puado, who entered in the 74th minute, added a goal eight minutes later and wrapped up the win with another goal in stoppage time. Espanyol’s appearance at City Stadium marked the first time a team from La Liga played in Virginia.

“This is just another step in the process of getting a better understanding on a team level,” said head coach David Bulow. “I’ve seen things that weren’t quite there, but that’s going to come with time. Of course, you would have liked to hold on to get an actual result out of that, but they’re good.”

“When a big crowd comes out, that’s when everyone wants to play,” Shanosky said. “Just a great night for everyone. When you have these big crowds, it’s awesome for the community. As a player you just thrive off that energy. Thankful for everyone to come out tonight.”

After both teams started to settle into the match, the Kickers drew first blood in the 11th minute. Brian Shriver curled a shot from outside the box, but Espanyol’s Roberto parried it away for the save, setting up a corner. Scott Thomsen delivered the ball in from the corner and connected with Shanosky high in the air. Shanosky’s header found the back of the net, giving Richmond the 1-0 lead.

“La Liga is my favorite league, so for me to be out here, play 45 minutes and score a goal was pretty special for me,” Shanosky said.

Espanyol’s Borja Iglesias made a run past the Richmond backline in the 29th minute. Trevor Spangenberg came up big with the save on Iglesias, keeping the Kickers ahead 1-0.

Off a free kick in the 38th minute, Espanyol’s Baptistao played it ahead to Iglesias who again beat the Richmond defense. This time Iglesias stayed calm, flicking it over Spangenberg who rushed out. The ball trickled into the nylon, equalizing the game at 1-1.

The game didn’t remain tied for long. Just five minutes later in the 43rd minute, Braeden Troyer struck for the Kickers, sneaking a goal in the bottom left corner past Roberto. Troyer, who’s in his fourth year with the Richmond, tallied his first goal in a Kickers’ uniform.

Coming out of the half, Espanyol peppered a flurry of shots on goal, but Travis Worra stood strong in net. Worra denied Iglesias in the 60th minute and Pablo Piatti in the 69th minute to preserve Richmond’s lead.

Espanyol eventually capitalized on its opportunities late in the game. In the 80th minute, Puado’s header found the back of the net on a beautiful cross from Álvaro. The goal level the score at 2-2 and really got Espanyol’s attack rolling.

It took 87 minutes for Espanyol to garner its first lead of the match. After a Travis Worra save, Sergi Darder pounced on a loose ball and scored the go-ahead goal for Espanyol. In stoppage time, Puado added his brace to give Espanyol the 4-2 advantage. Pablo Piatti played a beautiful ball finding Puado in the box.

The Kickers return to USL action, hitting the road and traveling south to face long-time rival Charleston Battery on Saturday, July 28. Richmond defeated Charleston 2-0 in the first meeting this season on June 9. Then, the Kickers will continue the road trip by heading to Pittsburgh to face the Riverhounds SC on August 1. Pittsburgh won the early season matchup between the two sides, 2-1 on June 2.