KICKERS AND ATLANTA PLAY OUT TO TOUGH DRAW 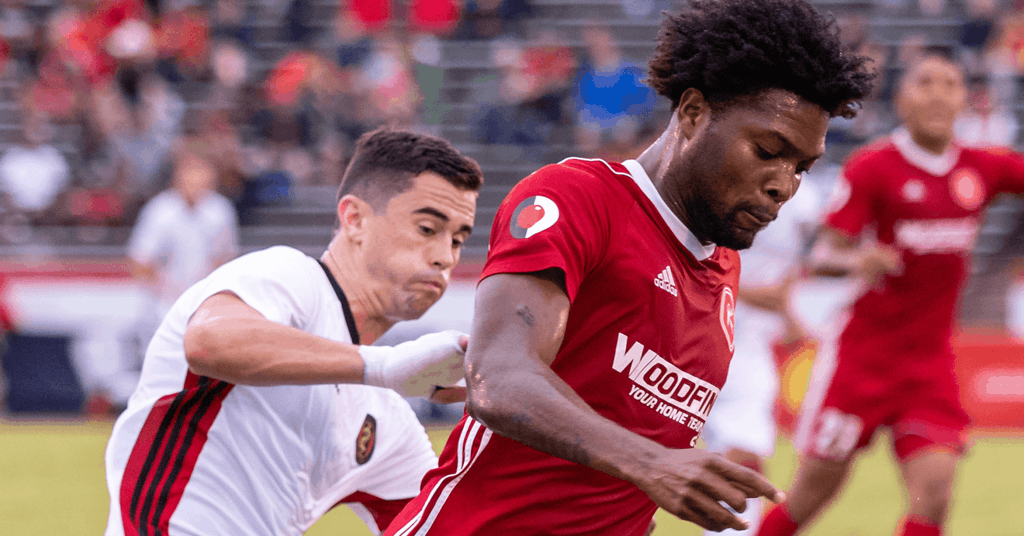 RICHMOND, VA — (Saturday, July 21, 2018) — The Richmond Kickers (5-10-3) and Atlanta United 2 (3-9-6) each earned a point from City Stadium with the game ending in a 1-1 draw. Richmond’s Brian Shriver opened the scoring when he stepped up to take a short free kick, curling the shot into the upper left corner for his sixth goal of the season. Atlanta evened the score in the second half when Jon Gallagher picked up a loose ball and beat Richmond goalkeeper Trevor Spangenberg with a well-placed shot in the 67th minute.

After neither side threatened in the beginning, Kickers’ forward Brian Shriver unleashed a shot from outside the box in the 24th minute. Shriver’s shot sailed over the crossbar and the score remained level.

Shortly after in the 27th minute, Luiz Fernando made a dribble move to his left foot and uncorked a shot on goal for the Kickers from about 20 yards out. Fernando’s attempt was buried into the chest of Atlanta goalkeeper Nicolas Caraux for the first save of the match.

The Kickers struck first in the 38th minute after Greg Boehme won a free kick from just outside the box. Shriver stepped up to take the free kick and curled a shot right over the Atlanta wall into the upper left corner of the net. It was Shriver’s team-leading sixth goal of the season.

Atlanta got the first opportunity in the second half when Atlanta goalkeeper Nicolas Caraux found Lagos Kunga on a deep ball in the 53rd minute. Kunga beat Richmond’s Conor Shanosky and fired a low shot that skidded just outside the post.

The Kickers had a chance just five minutes later when Shriver tried to find a cutting Boehme in the box. The ball got deflected around and landed at the feet of Raul Gonzalez in the center of the box. However, Gonzalez couldn’t make solid contact and weakly hit a shot into the arms of Caraux for the save.

Atlanta found its equalizer in the 67th minute. Troyer was dispossessed from just outside the box and Atlanta’s Jon Gallagher came flying in to scoop up the loose ball. After a few dribble moves towards the goal, Gallagher finessed a shot into the bottom left corner of the net to level the score 1-1.

Richmond nearly took the lead with 15 minutes remaining in the match. Raul Gonzalez sent a curling shot that seemed destined for the top right corner until it floated just a hair above the crossbar for a goal kick.

After a flurry of late chances from each side, both defenses stood strong and the two squads played out to a 1-1 draw.

The Kickers welcome RCD Espanyol to City Stadium on Wednesday, July 25, presented by Big Apple Neighborhood Market. Before the match, fans will have the opportunity to see the La Liga opponent at an open training session, presented by Lalo’s Cocina, on July 23 at 7 p.m. The open training session is free with the purchase of a ticket to the match against Espanyol. Tickets are available on RichmondKickers.com.