KICKERS FALL TO NEW YORK ON THE ROAD 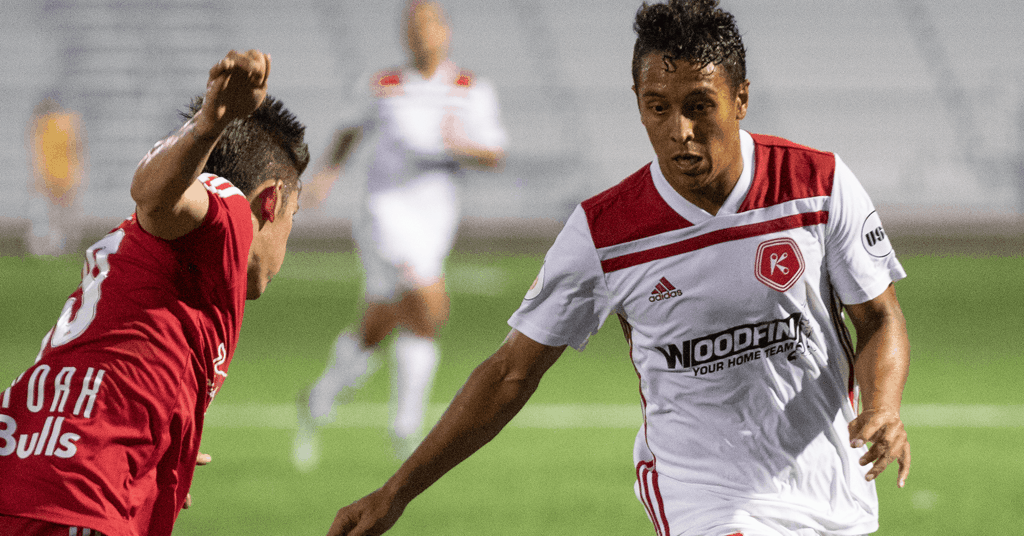 MONTCLAIR, N.J. — (Friday, July 13, 2018) — The Richmond Kickers (5-10-2) were defeated on the road by the New York Red Bulls II (7-5-7) Friday night at MSU Soccer Park. New York opened up the scoring after just two minutes and never looked back, adding two more before halftime. Two more second half goals sealed the victory for the home side. Richmond would get a goal back in the 76th minute as Luiz Fernando set up Brian Shriver for his fourth goal of the season.

The Kickers fell behind early with Jared Stroud finding the net. Conor Shanosky played the ball back to Travis Worra. As he was going to play the ball up the field, Stroud managed to put himself in front of the clearance. The ball took a deflection off Stroud and into the goal to put the home side up.

Travis Worra needed to come up with a save in the 10th minute to keep New York from getting a second early goal. Brian White played the ball up the right flank for Andrew Tinari. He chipped in a cross to find Amando Moreno. Worra came sliding off his line to get a hand on Moreno’s shot to deflect it away.

Jared Stroud scored his second goal of the night, putting New York up 2-0 after 14 minutes. Tinari found space out wide left. He played fed the ball up the left sideline to Moreno. Before reaching the endline, Moreno cut the ball back in front of goal for a trailing Stroud. He just needed to redirect his shot towards goal.

The first real chance for the Kickers came in the 23rd minute from Raul Gonzalez. Luiz Fernando was being pressured on the right wing. He cut the ball back to find enough space to get a cross in towards the New York box. Gonzalez met the ball with a diving header, forcing New York keeper Evan Louro to leap to his right to make the save.

New York would get a third goal in the 34th minute. Lucas Stauffer controlled the ball out on the right side of the field. Stauffer snuck a ball through to the middle of the field for Brian White. He turned and played a quick short ball to Moreno on the left wing. Moreno took a touch to get enough space to get around Braeden Troyer and put a shot on frame and past a diving Travis Worra to find the far post.

A last ditch challenge from Travis Worra prevented a fourth goal for NYRBII in the 48th minute. Niko De Vera played the ball over the top as Brian White found space in behind the Richmond backline. White went for a shot as Worra came outside the Kickers box to deflect away the shot.

Raul Gonzalez pushed the attack with back to back chances, first coming in the 49th minute. Finding space up the left flank, Gonzalez pushed forward towards the end line. He played a cross into the box as Brian Shriver is there to try for a shot that ended up wide of the far post. A minute later, Shriver slotted the ball through the NYRBII back line for Gonzalez. He tried for his shot at the top box the box, this time going wide left of the goal.

A fourth goal came for NYRBII from Brian White in the 60th minute. Andrew Tinari sent in a low cross to the near post from the left wing to find White sliding into the six yard box, beating Travis Worra to the ball.

Eight minutes later, Jared Stroud completed his hat trick, scoring the fifth goal of the night for New York. Richmond was not able to clear a corner kick from Moreno out of danger, allowing Hassan Ndam to get a touch to the ball and get it to Christopher Lema. He went for a low, curling shot in to the far post as Worra got a touch to the ball. The ball rolled out to Stroud and he made no mistake to put it into the back of the net.

The Kickers would finally pull a goal back in the 78th minute through Brian Shriver. Alex Lee started the sequence from the Richmond end of the field, feeding the ball up for Shriver at midfield. He quickly slotted the ball through for Fernando and continued his run to goal. Fernando took a touch to get around a sliding Evan Louro, allowed him to lay the ball back for Shriver for a simple tap in.

New York were reduced to 10 men in the 77th minute as the Red Bulls II keeper was shown his second yellow card. Luiz Fernando looked to do the same play that set up the goal for Richmond as he was trying to get past Louro, the keeper came out for the challenge, only to miss the ball and take out Fernando right at the top of the New York box. Louro received his second yellow of the night, leading to a red card and being sent off. Having used all three subsitutions, Red Bulls II had to put forward Brian White in goal.

Luiz Fernando nearly found a second Richmond goal heading into stoppage time. Controlling the ball out on the right wing, Fernando cut inside across the top of the box. He tried to sneak in a shot towards the near post, as his shot went just wide of the net.

A final chance came for the Kickers deep into stoppage time from Alex Lee. Luiz Fernando looked to play in a cross that ended up being deflected away and out to the right wing for Braeden Troyer to control. Troyer tried to get the ball back in, finding Lee at the far post for a header as his effort sailed over the goal.

The Kickers return home to City Stadium on July 21 to battle Atlanta United 2 during Carytown Block Party, presented by Bon Secours. Savor locally-owned restaurants and food trucks including legendary Carytown Burgers & Fries and Ginger Thai while browsing handcrafted and one-of-a-kind items on display in a mini-Carytown marketplace at City Stadium. The party starts at 5:30 p.m. with live music by Hazeltone, Carytown restaurants and food trucks, FREE bike valet, and over a dozen craft beers and ciders on tap, before the Richmond Kickers take on Atlanta United 2 at 7:00 p.m. Then, the Kickers will turn their attention towards RCD Espanyol of La Liga on July 25th. The friendly will be the first time that any team from Spain’s top soccer league makes a trip to the state of Virginia. Tickets are available for both games on RichmondKickers.com.