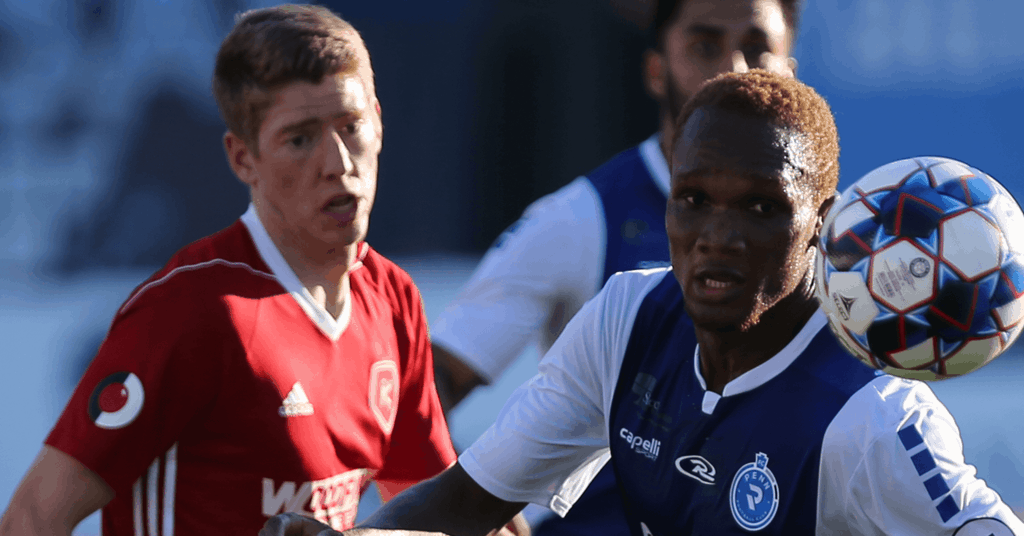 HARRISBURG, Pa. — (Monday, July 9, 2018) — The Richmond Kickers (5-9-2) picked up their first road win and first win under head coach David Bulow at FNB Field Monday night against Penn FC (6-5-7). Scott Thomsen scored a stunning free kick in the 32nd minute to put the Kickers ahead. Luiz Fernando doubled the lead in the 74th minute, finishing off a cross from Brian Shriver. Lucky Mkosana pulled a goal back for Penn FC in the 77th minute from the penalty spot. Richmond would hold on for all three points.

Two minutes into the start of the match, and the home side looked to get on the board early. Baffoe Prince received the ball out wide on the right side and pressed up the field. He played in a cross towards the back post. Issac Osae tried to get a header as Alex Lee is there to head it wide and out of danger.

A minute later and this time it was the Kickers looking to create and opportunity. Luiz Fernando controlled the ball in the middle of the field. He looked up to spot Brian Shriver making a perfect run inside as the ball was slotted through by Fernando. Shriver tried to get a quick shot off inside the box as Sean Lewis was able to get a hand to the ball and deflects it away.

Travis Worra needed to come up with a save in the 16th minute to keep Penn FC off the board. Marco Franco played a long ball up the right side of the field. He found Issac Osae, who could only head the ball down for Baffoe Prince. He got inside the Richmond box and went for a shot towards goal. Worra dove to make the save and deflect the ball away.

A free kick opportunity in the 32nd minute gave Richmond the lead. Richard Menjivar tackled Fred Owusu Sekyere from behind about 35 yards from goal, setting up a free kick chance for the Kickers. With Brian Shriver and Scott Thomsen standing over the ball, Shriver stepped over the ball and allowed Thomsen to go for the shot on goal. His shot was a laser into the top, right corner out of the reach of Sean Lewis.

A double save from Travis Worra kept the clean sheet going for the Kickers in the 55th minute. Dan Metzger played a ball over the top as Issac Osae was able to get in behind the Richmond back line. Worra came off his line to shut down a shot by Osae. Second half substitute Paulo Júnior beat Scott Thomsen to the ball and had another chance on goal, which Worra punched away.

Lucky Mkosana nearly got Penn FC back into the match in the 70th minute. Kenneth Tribbett sent the ball out wide left for Pedro Galvão. He took a touch and then sent in a cross towards the back post to connect with Mkosana. His glancing header was just wide of the Richmond goal and out for a goal kick.

Richmond would double their lead in the 74th minute. Sean Lewis played the ball out of the back for Tiago Calvano. His first touch was a bit too much as Brian Shriver pounced on the loose ball. He played in a cross that skipped past Lewis and found Luiz Fernando at the back post. Lewis had a touch on the ball, but it was not enough as it bounced in for the goal.

Three minutes later and Penn FC would pull a goal back from the penalty spot. Frederick Opoku was able to beat Travis Worra, as Braeden Troyer came up with a last ditch, goal line save. The ball bounced in the Richmond box. Lucky Mkosana came crashing in and was tackled by Alex Lee, forcing the referee to point at the spot. Mkoana stepped up and sent Worra the wrong way, firing his shot to the right and into the back of the net.

With six minutes to go, Paulo Júnior nearly tied the game up. After winning the ball on the right sideline, Paulo continued his run with plenty of space towards the Richmond goal. With no Kickers player challenging, Paulo went for a shot on target that Worra needed to parry away from danger.

The Kickers have a quick turnaround and head back on the road at New York Red Bulls II this Friday night. Friday night’s match will be available to stream online on ESPN+ at 7:00 p.m. After this match, the Kickers return to City Stadium to host Atlanta United 2 July 21 at 7:00 p.m. Tickets are available now at RichmondKickers.com.