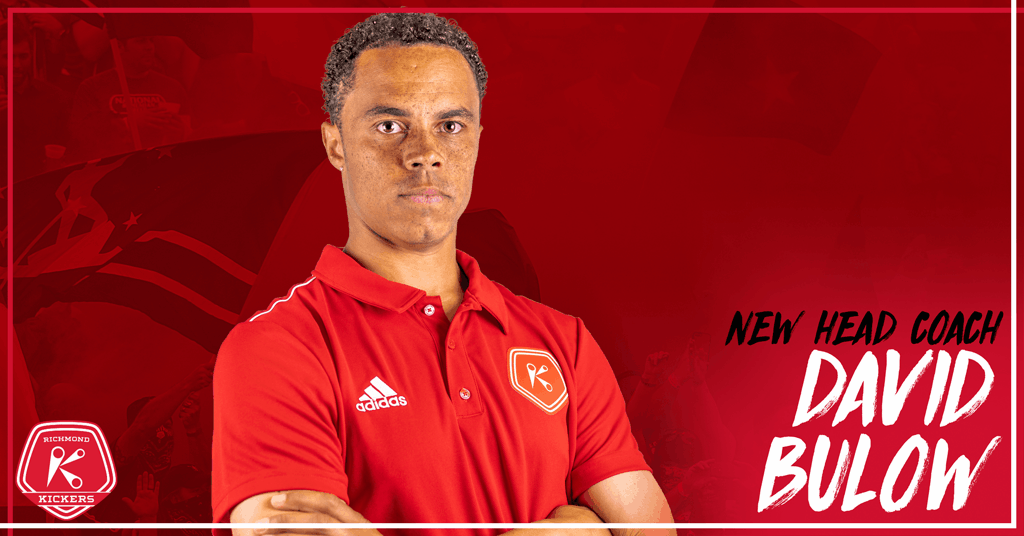 RICHMOND, Va. – (Wednesday, June 27, 2018) – The Richmond Kickers announced today that former professional player David Bulow has been appointed head coach for the remainder of the 2018 season.  Making 127 appearances with the Kickers from 2006-2009 and 2011-2013 and holding a USSF A License, Bulow will serve as the first team’s seventh head coach in the club’s 26-year history.

“We are pleased to announce David Bulow as our new head coach,” commented Rob Ukrop, Richmond Kickers President, Board of Directors.  “We have been impressed with David's work within our Academy environment over the last several years, and we are excited for David to introduce his fresh soccer perspective into our first team squad. We know David to be an incredibly hard-working teammate, a tremendous competitor, and wonderful family man who values teamwork and camaraderie.”

“I am excited to be named the new head coach of the Richmond Kickers,” said Bulow. “It's an honor to be added to the list of head coaches of one of the most historic and storied clubs in US soccer.  I am very much looking forward to the challenges ahead.”

Bulow has been coaching within the Richmond Kickers Youth Soccer Club and Richmond United U.S. Soccer Development Academy for eight years, most recently acting as Richmond United U15, U17 and U19 Head Coach.

“We are proud to continue our strong tradition of hiring from within the club,” added Leigh Cowlishaw, Richmond Kickers Director of Soccer.  “This is a wonderful opportunity for David and as a former pro player and assistant coach, I know his passion for the club and city will resonate with both players and fans.”

Over seven seasons as a professional player with the Kickers, Bulow amassed 45 goals and 13 assists en route to three USL Championship appearances.  Returning to Richmond in 2011 after a one-year hiatus from the club, he became the U.S. Open Cup all-time leading scorer that season after notching his 14th goal in tournament history against Major League Soccer’s Sporting Kansas City to lead the Kickers to a stunning 2-0 upset and a berth to the U.S. Open Cup Semifinals for the first time since 1995.  A native of Denver, Colorado, he resides in fourth place on the club’s all-time career goals list and in fifth place on the all-time career points list.

Bulow’s appointment follows the decision of long-time head coach Leigh Cowlishaw to step aside after 19 seasons at the helm to focus full-time on his duties as Director of Soccer.