KICKERS SETTLE FOR DRAW AGAINST CHARLOTTE BEHIND SHRIVER GOAL 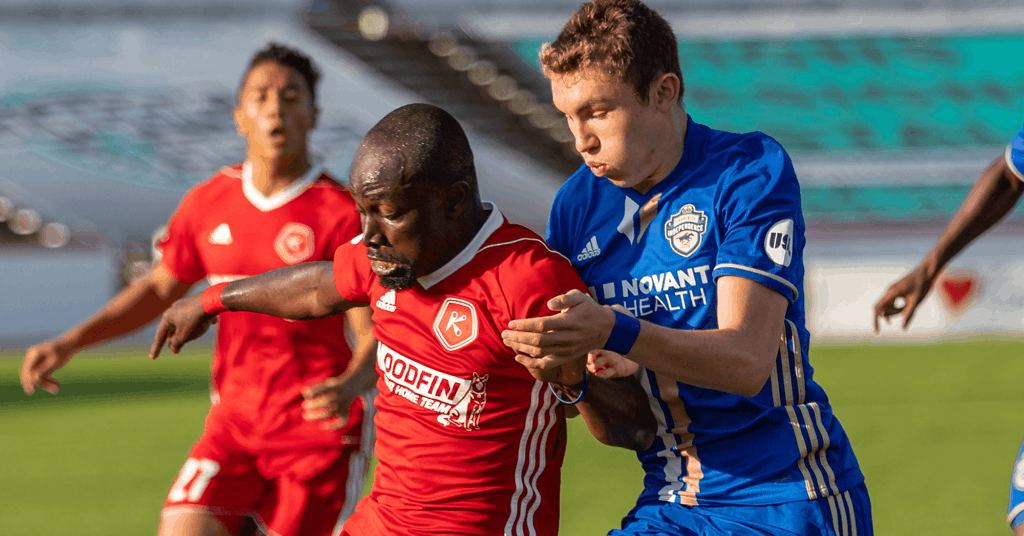 RICHMOND, Va. — (Saturday, June 23, 2018) — The Richmond Kickers (4-8-2) played to a 1-1 draw with the Charlotte Independence Saturday night at City Stadium. Brian Shriver put the Kickers ahead after six minutes as he put away a cross from Raul Gonzalez. Charlotte would double the score in the 20th minute after Cordell Cato slipped in behind the Kickers backline.

The Kickers got on the scoreboard early after just six minutes from the team leading scorer Brian Shriver. Oscar Umar controlled the ball in the Richmond end of the field. He looked up and picked out Heviel Cordovés making a run up the left side of the field. He turned and cut across the top of the box and left the ball for Raul Gonzalez on the right side of the box. Gonzalez played in a cross to the back post as Kevan George got a head to the ball. Shriver was there to put away the deflection and put Richmond ahead.

Raul Gonzalez forced a save out of Andrew Dysktra to keep the Kickers from doubling their lead. Heviel Cordovés was tackled from behind by Je-Vaughn Watson to set up a free kick opportunity about 30 yards from goal. Gonzalez stepped up and sent his free kick over the wall and towards the far post, as Dykstra dove to make the save.

Charlotte would tie it up through Cordell Cato in the 20th minute. Je-Vaughn Watson sent the ball up the field for Kay Voser right on the midfield line. He turned and found Cordell Cato making a perfect run in behind the Kickers backline. He went one-on-one with Trevor Spangenberg and needed to take a touch to get around Spangenberg and followed the ball in across the line for the tying goal.

Three minutes later and Brian Shriver looked for a second goal. After fighting his way up the right side of the field, Raul Gonzalez played a quick pass to Shriver. He quickly turned a went for a long range effort from about 25 yards out which forced a save out of Andrew Dykstra.

Richmond nearly took the lead late into first half stoppage. After winning a corner kick, Brian Shriver sent in a cross and connected with Oscar Umar at the near post. He put a header on frame and it beat Andrew Dykstra, but deflected off the crossbar. William Yomby followed up with a header of his own, this time saved off on the line by Jorge Herrera.

Seven minutes into the second half, Charlotte nearly found the go-ahead goal from a set piece. Jorge Herrera stood over a free kick on the left side of the field, about 30 yards from goal. He sent a cross in towards the back post, finding Je-Vaughn Watson for a header, that bounced just wide of Spangenberg and the goal.

Fred Owusu Sekyere nearly found the second goal of the night for Richmond in the 57th minute. Receiving a pass in the middle of the field, Owusu Sekyere played the ball out wide right for Alex Lee on the wing. Instead of going for a cross, Lee played the ball back for Owusu Sekyere who took a nifty touch around Kevan George. He then took a quick shot to the far post that skipped just wide of the net.

Nine minutes later, second half substitute Yudai Imura looked to get on the board for Richmond. Imura found Alex Lee out wide on the right wing. Lee fed the ball through for Raul Gonzalez inside the Charlotte box. Unable to find space, Gonzalez played the ball back for Imura rushing in. His shot rolled right to the hands of the Charlotte keeper Dykstra.

Cordell Cato looked for his second of the night in the 79th minute, making Trevor Spangenberg come up with a save. Samuel Vines sent the ball out wide left for Alex Martinez up the sideline. He took a touch to get the ball over for Yann Ekra, who turned towards goal. Before colliding with Braeden Troyer, he was able to get a touch over for Cato. He went for the one-time effort, forcing Spangenberg to dive to his left for the save.

The Kickers are back at City Stadium next Saturday night for BBQ and Bluegrass Night. Presented by Smohk, the party starts at 5:30 p.m. with live bluegrass music by the Cary Street Ramblers and craft beer on tap for only $22 ($16 for Season Ticket Holders). Includes an exclusive pre-game VIP party, traditional pulled pork sandwiches, baked beans and coleslaw by Smohk BBQ, two craft beers or sodas, and admission to the Richmond Kickers vs North Carolina FC game. Kickoff is set for 7:00 p.m. Tickets are available now on RichmondKickers.com.