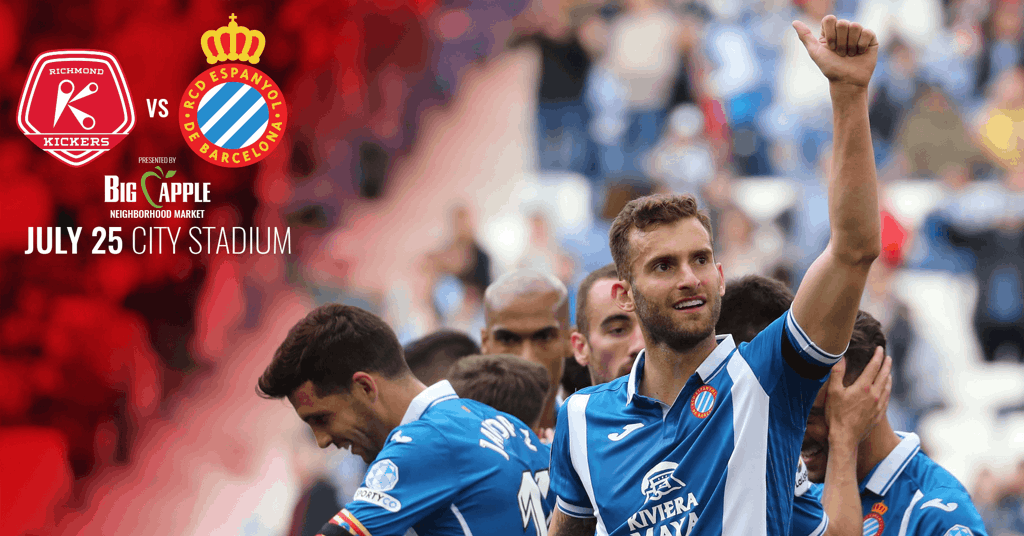 RICHMOND, VA – (Monday, June 18, 2018) – The Richmond Kickers are proud to host RCD Espanyol of the world famous LaLiga in an international exhibition, presented by Big Apple Neighborhood Market, at City Stadium on Wednesday, July 25 at 7:00 p.m.  The historic match marks the first time a team from Spain’s top flight will appear in Virginia.  City Stadium will serve as Espanyol’s base camp during their seven-day U.S. preseason tour, which will include training sessions open to the public to be announced at a later date.

Following a 48-hour private presale, general admission tickets will go on sale at noon on Wednesday, June 20 at RichmondKickers.com.

“We look forward to hosting Espanyol in Richmond and attracting even more fans to City Stadium for what has become a Richmond tradition and our biggest attended game of the season,” commented Leigh Cowlishaw, Richmond Kickers Director of Soccer.  Espanyol are a world-class club with a long tradition of excellence.  We anticipate July 25th to be a fantastic night of entertainment for fans of the beautiful game.”

Espanyol finished the 2017-18 campaign in 11th place in LaLiga with season highlights including a 1-0 win against 2018 UEFA Champions League winners Real Madrid, a 1-0 win against Europa League Champions Atlético Madrid and a 1-1 draw with crosstown rivals FC Barcelona.

The Barcelona-based club established in 1900 claimed the Spanish national cup title, Copa del Rey, on four occasions, most recently in 2006, and reached the UEFA Cup Final in 1988 and 2007.  Top players on Espanyol’s roster include 2018 FIFA World Cup players such as Costa Rica’s Oscar Duarte and Colombia’s Carlos Sanchez.  The club also features multiple players who have played for Spain’s National Team and who have represented Spain at FIFA’s youth competitions, and many who currently play for the Catalonia National Team.