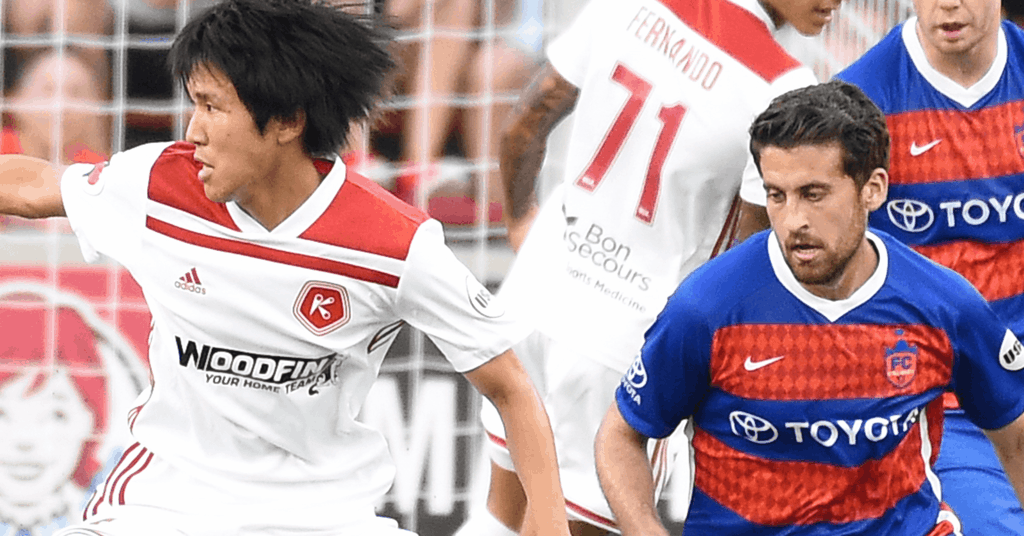 CINCINNATI, Ohio — (Saturday, June 16, 2018) — The Richmond Kickers (4-7-1) fell on the road to the FC Cincinnati (9-3-3) at Nippert Stadium Saturday night. The home side took the lead after eight minutes through Emmanuel Ledesma, followed by a second goal from Nazmi Albadawi nine minutes before the end of the first half. Danni König and Ledesma scored two more in the second half to down the Kickers 0-4.

Yudai Imura forced a save out of Cincinnati goalkeeper Evan Newton in the seventh minute. Luiz Fernando dispossessed Nazmi Albadawi in the Cincinnati end of the pitch. He played a quick pass for Yudai Imura near the top of the box. Imura took a slight touch to get enough space for a shot that curved in, right to the hands of Newton.

Cincinnati would go ahead early, as Emmanuel Ledesma put the home side up after eight minutes. Off a throw in, Ledesma got the ball up the left side for Danni König. With tight pressure by Conor Shanosky, König played it back for Ledesma. He took a touch and put the ball on frame, arcing over Travis Worra and into the back of the net for the opener.

Heviel Cordovés came close to getting the Kickers on the board in the 27th minute. Yudai Imura controlled a loose ball in the midfield and turned towards goal. He passed it over to Cordovés in the middle of the field. After a nifty touch around Emmanuel Ledesma, Cordovés let a shot rip from  about 30 yards out, forcing a diving save from Evan Newton.

The home side went up three in the 60th minute through Danni König. Justin Hoyte received the ball out wide on the right side of the field. With space, Hoyte made a run near the midfield line and sprung König with a well-timed pass. One-on-one with Travis Worra, König played it just to Worra’s left and into the goal.

Emmanuel Ledesma scored his second of the night, and the fourth for Cincinnati seven minutes later. Justin Hoyte worked the ball around the right side of the field near the Richmond box. He took a quick touch to get the ball to König, as he gave it right back to Hoyte. Ledesma was trailing just behind Hoyte, as he received a pass and just took a touch and got it past a diving Travis Worra, just inside the far post.

Just into stoppage time, Travis Worra needed to make a massive save to keep the second half substitute Emery Welshman from getting on the board. Emmanuel Ledesma stood over a free kick just inside the left sideline. He played in a cross towards the near post, picking out Welshman. He tried to flick on the ball, as Worra was able to punch it away.

The Kickers return home on Saturday, June 23 to host the Charlotte Independence for Summer Fest from City Stadium presented by Sticks Kebob Shop, Crossridge Family & Cosmetic Dentistry and Bounce 2 The Moon. The party starts at 5:30 pm with live music by Hazeltone, a one-of-a-kind splash zone featuring a 40-foot slip ‘n slide and a 20-foot water slide, human foosball, soccer darts, inflatable games, RVA food trucks and over a dozen craft beers on tap! Kickoff is set for 7 p.m. and tickets are available now on RichmondKickers.com.