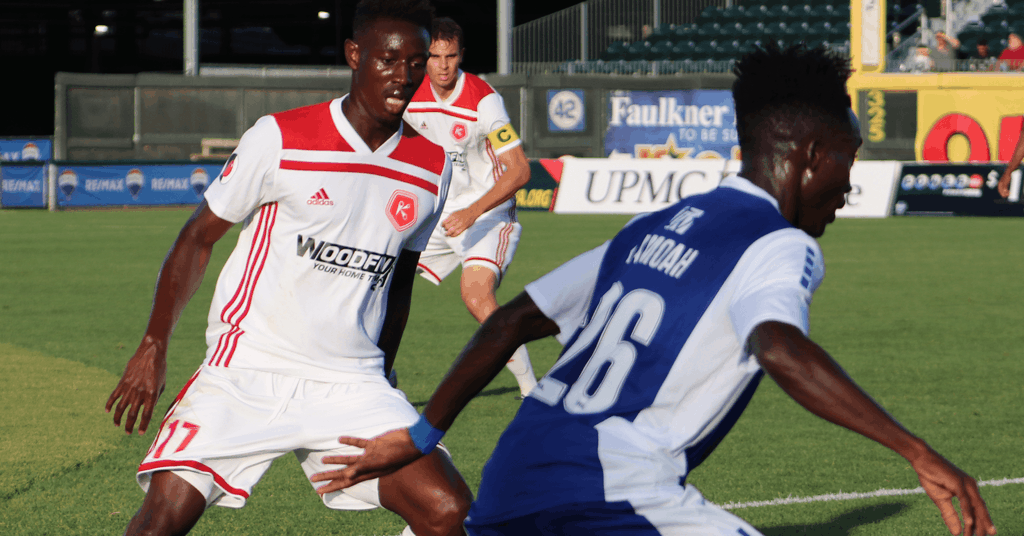 HARRISBURG, Pa. — (Tuesday, June 12, 2018) — The Richmond Kickers (4-7-1) fell on the road to Penn FC (4-4-5) 1-2 at FNB Field Tuesday night. The home side took the lead in the 56th minute as Isaac Osae pounced on an open ball, followed by Dan Metzger finishing off a corner kick from Richard Menjivar in the the 86th minute. The Kickers would get one back late into stoppage time as Brian Shriver found Heviel Cordovés on a set piece for the second straight match.

The Kickers looked to try and create the first opportunity of the match in the 20th minute. After controlling the ball at the back, Conor Shanosky played the ball up the center of the field to pick out Dane Kelly, just inside the Penn end of the field. He turned to create enough space and fed the ball through for an on rushing Brian Shriver. The flag stayed down as Shriver made his run, as the ball was just too far ahead and met by Penn keeper Romuald Peiser came off his line to clear it away from danger.

Penn FC would get the first chance of the match in the 25th minute from Calvin Rezende. Jake Bond worked the ball up the right side of the field, trying for a shot towards goal. Mekeil Williams got a foot to the ball to clear it away momentarily, falling to the feet of Rezende. He took a one time shot that rolled harmlessly to Travis Worra.

Luiz Fernando worked to get the ball to Koby Osei-Wusu in the 26th minute that nearly got the Kickers on the scoreboard. Oscar Umar played the ball out to the right side and Fernando. With Pedro Galvão pressuring, Fernando fed the ball to his left as Osei-Wusu made a well-timed run into the Penn box. He tried to find the near post, but went just too wide and out for a goal kick.

Penn FC responded just eight minutes later, coming close to finding the opener. Richard Menjivar set up a corner kick to the right of Travis Worra’s goal. He played in a cross into the back post to find Isaac Osae. He tried to put a header on frame, as it grazed wide and out of danger.

Brian Shriver forced a save from Romuald Peiser in the 35th minute. Braeden Troyer got a foot in front of a Penn pass and up the field for Luiz Fernando. Finding himself with four defenders in front of him, Fernando turned to pick out Koby Osei-Wusu in space just behind him in the middle of the field. He could not find enough space for a shot and instead played the ball to his left for Brian Shriver. He just took a touch before putting a shot on frame to force the save from Peiser.

Five minutes before halftime, Aaron Dennis nearly snuck one in. Dan Metzger found Dennis out wide right. Making his way towards goal, Dennis looked to play a cross and instead went quickly for the near post as his shot just nearly went wide.

Richmond earned a free kick two minutes into the second half in a dangerous spot. A handball from Penn FC, gave the Kickers the free kick opportunity on the edge of the Penn box, to the right of goal. Shriver stepped up for the free kick and connected with Dane Kelly right in front of goal. He leaped to get a head on the ball, as his shot sailed high of goal.

The woodwork prevented Brian Shriver from getting on the scoresheet in the 51st minute. Braeden Troyer played a well placed pass out wide right for Luiz Fernando. Fernando took a touch to get it inside for Shriver. He wanted the one-time effort as the ball came off the crossbar and cleared away by the Penn FC defense.

The home side broke the deadlock in the 56th minute from first half substitute Isaac Osae. After winning a free kick from about 35 yards from goal, Richard Menjivar found Harri Hawkins inside the Richmond box for a header. He shot was punched away by Travis Worra, unfortunately for the Kickers, right to the feet of Osae. He made no mistake to find the back of the net.

Brian Shriver came close once again in the 62nd minute to try and get Richmond back into the match. Tiago Calvano came from behind to tackle Dane Kelly, earning himself a yellow card and setting up the free kick for Richmond about 30 yards from goal. Shriver went for goal from the free kick, which forced Peiser to tip the ball up and over the goal, out of danger.

Travis Worra needed to come up with a save in the 85th minute to keep Frederick Opoku off the board. Controlling the ball in the midfield, Jake Bond looked up to see Opoku making a run up the left side of the field. He took a touch to get enough space away from Braeden Troyer, and went for a shot at the near post from about 25 yards out. Travis Worra stretched to parry away the shot and concede a corner kick.

Penn FC doubled their lead a minute later from the ensuing corner kick. Richard Menjivar came over to the right side for the corner kick. As the kick was taken, Dan Metzger was able to get away from Oscar Umar just enough to get a head to the ball and redirect it to Travis Worra’s left and into the net for the second goal of the night.

Heviel Cordovés scored his second goal in as many matches late into stoppage time to pull back a consolation goal for Richmond. The Kickers earned a later corner kick heading late into stoppage time. Brian Shriver rushed over to take the corner kick. Cordovés made a near post run to meet Shriver’s cross in, redirecting it into the far post netting as the whistle blew to end the match.

The Kickers return to action Saturday night as the travel to Nippert Stadium to take on the Eastern Conference leaders, FC Cincinnati. Kickoff for that match is set for 7:00 p.m. and will be available live on the Kickers Official Television Partners WTVR CBS 6 on their 6.3 sub channel (Comcast 206, Verizon FiOS 466) and online through ESPN+.