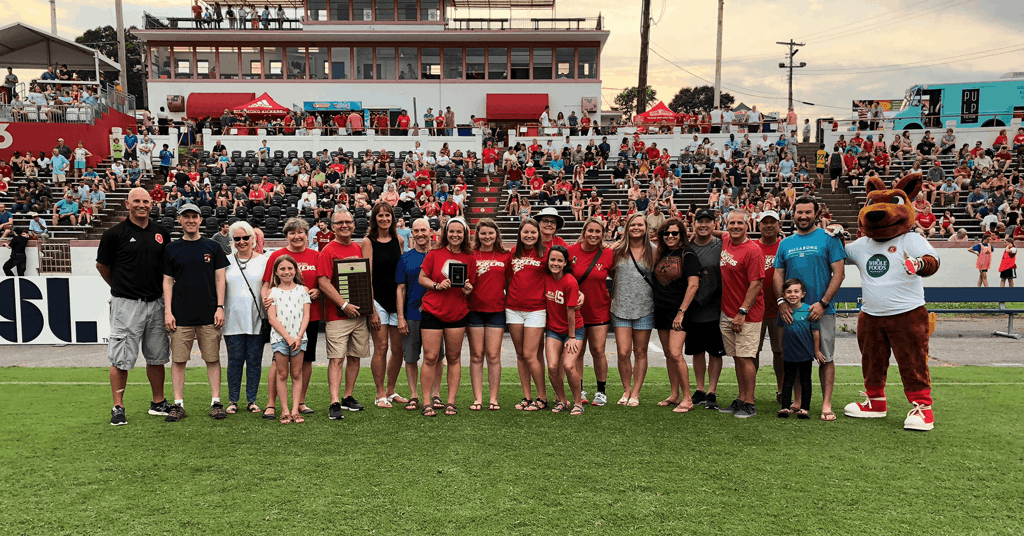 RICHMOND, VA – (Monday, June 11, 2018) – The Richmond Kickers and the Spence family were pleased to honor Caelan Colaiacovo with the eighth annual Avery Spence Youth Community Service Award during halftime at the Kickers pro game versus the Charleston Battery on Saturday, June 9.  Established to honor Kickers youth player, Avery Spence who was tragically killed in an automobile accident on May 1, 2011, the Avery Spence Youth Community Service Award was presented to Caelan by the Spence family based on criteria including exemplary volunteer involvement, commitment, leadership and athletic and academic achievements.

A member of the Richmond Kickers travel program since 2012, Caelan played on several Kickers Elite teams, most recently captaining the team to a WAGS title in fall 2017.

Mark Stollsteimer, coach of the Richmond Kickers Elite team, praised Caelan’s character, describing her as “a great captain for [his] U18 elite team.”  Stollsteimer said, “Caelan is a wonderful choice for the Avery Spence Award. She is a leader both on the field and in the classroom and goes out of her way to give back to the community. She will be a great addition to the Coker College Women’s Soccer Program and the Coker College community. It was an honor and privilege to coach her.”

As a four-year member of the James River High School soccer team, Caelan was a 2017 6-A Regional Finalist, 2017 State Quarter Finalist and helped anchor a defense that ended the 2018 season with a record of 13-1-1.

As a student, Caelan was named to the honor roll all four years; graduating with a 4.58 GPA. She is a member of several honor societies including National Honor Society, Mu Alpha Theta, World Languages National Honor Society, and Rho Kappa.  She was awarded the Health and Physical Education award during both her freshman and sophomore years and was named Most Valuable Rapid her freshman year. She was a member of Beta Club, the French Club, the World Culture Club, and the Recycling Club.

While Caelan’s athletic and academic accomplishments are impressive, her volunteer work and commitment to others is unparalleled. She volunteered her time with the Do Something Club, Young Life, the MAC Turkey Trot, and Camp Carefree. She played the role as princess for the Daddy Daughter Dance to help raise money for Title 1 schools. Caelan was a S.U.R.F mentor, welcoming freshmen to James River each year. She was a Success Mentor, spending a class period working with other students who may be struggling academically. Through her youth group, Caelan volunteered with Caritas, was a teacher for Vacation Bible School, went on several service trips to Appalachia as part of the Appalachian Service Project, and worked with Rise Against Hunger. Caelan has also been a volunteer with the Richmond Kickers Pro Team for the last several years, commenting “I thought it was the perfect way to give back to my coaches.”

Continuing her soccer career at Coker College this fall, she is the daughter of Mike and Kim Colaiacovo.

Richmond Kickers President, Board of Directors Rob Ukrop presented the inaugural Avery Spence Youth Community Service award to the Spence family on July 8, 2011, to honor the memory of Kickers youth player Avery Spence and her commitment to the Richmond community.  A longstanding member of the Richmond Kickers youth club, she started with the Kickers rec program when she was nine years old, progressing with arguably the best girls team in the Kickers Girls Elite program over seven seasons.  A committed volunteer, Avery donated countless hours throughout the Richmond community, was in the academic top ten in her class at Manchester High School and was heading to Virginia Tech in the fall to pursue a career in dentistry.  Avery had a love for life, sharing her time and talent with kids of all ages. Past award recipients include former Kickers players Ashley Riefner (University of Richmond), Blayne Fink (Virginia Tech), Peter Coiley (Virginia Tech), Blake Cashin (VMI), Sawyer Gaffney (Davidson) and Shaan Sharma (William and Mary).