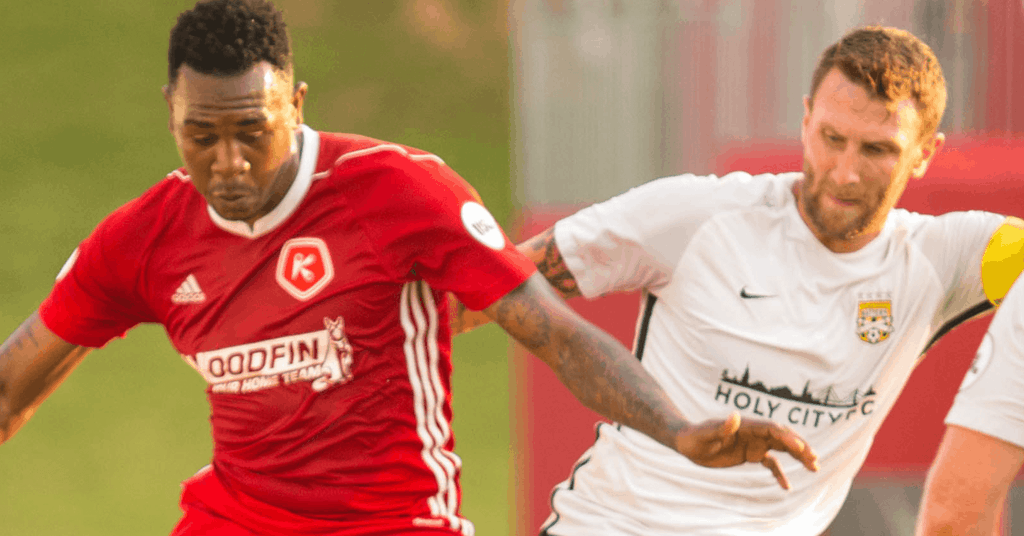 RICHMOND, VA — (Saturday, June 9, 2018) — The Richmond Kickers (4-6-1) picked up a much needed three points, defeating the Charleston Battery (5-3-5) 2-0 and ending a two-game home losing streak in the process. Richmond also snapped Charleston’s nine game unbeaten streak in USL action. The opening goal of the match occurred off a set piece when Brian Shriver curled a cross that pinballed off Heviel Cordovés’ head and into the back of the net in the 62nd minute. Luiz Fernando sealed the rivalry win with a left-footed strike in the 90th minute.

“I think we were the sharper team tonight,” said Kickers Head Coach Leigh Cowlishaw. “I liked our approach in the final third. There were some really good moments. It’s great for Cordovés to score. Luiz, we knew that he could do that in that position coming inside against that formation.”

Richmond squandered an opportunity in the 9thminute on a counterattack. Koby Osei-Wusu ended up firing a left-footed shot from just outside the box that sailed over the frame.

In the 15th minute, Charleston switched the field and Neveal Hackshaw made a move down the left sideline. Hackshaw connected with Patrick Okonkwo whose header was directed right into the chest of Richmond goalkeeper, Travis Worra for the save. The exact same play occurred three minutes later, and this time Okonkwo’s header was sent just wide-left of the post.

After some back-and-forth action, the Kickers countered with a pass ahead to Brian Shriver in the 40th minute. Shriver played it to Yudai Imura who laid it off for Braeden Troyer. Troyer rifled a shot from about 20 yards out that Charleston Joe Kuzminsky corralled for the save.

Both teams entered the locker room tied 0-0. The Kickers held 54.1 percent of the possession and outshot the Battery 8-6 in the first 45 minutes.

The Kickers nearly broke through in the 51st minute. Heviel Cordovés collected a pass in the box and passed it to a cutting Alex Lee. Joe Kuzminsky rushed out and cut down all angles, making the sliding save on Lee’s one-time shot.

Richmond again missed out on an excellent chance just a few minutes later. Koby Osei-Wusu curled a shot from the top of the box that was just a tad over the crossbar. The score remained level, 0-0.

The Kickers finally tickled the twine in the 62ndminute. Yudai Imura won a free kick down the left side from just outside the box. Off the set piece, Brian Shriver’s spiraling cross made a perfect connection with Heviel Cordovés’ head for the goal against his former team.

In the 76th minute, Richmond’s Austin Yearwood flicked a cross into the box that landed at Luiz Fernando’s feet. Fernando booted a shot that didn’t have enough power behind it and rolled into Kuzminsky’s arms for the save.

The Kickers put the icing on the cake in the 90thminute off the counterattack. Dane Kelly skipped the pass up ahead to Luiz Fernando who sidestepped to the top of the box and finished into the bottom right corner for the goal.

Richmond has a quick turnaround and head to FNB Field to face Penn FC on Tuesday, June 12. Then, Richmond will be on the road again to play the USL Eastern Conference leaders, FC Cincinnati from Nippert Stadium on Saturday, June 16. Both matches will be available to stream on ESPN+, with the FC Cincinnati match being available on the Kickers official television partners, WTVR CBS 6 via their 6.3 subchannel (Comcast 206, Verizon FiOS 466).