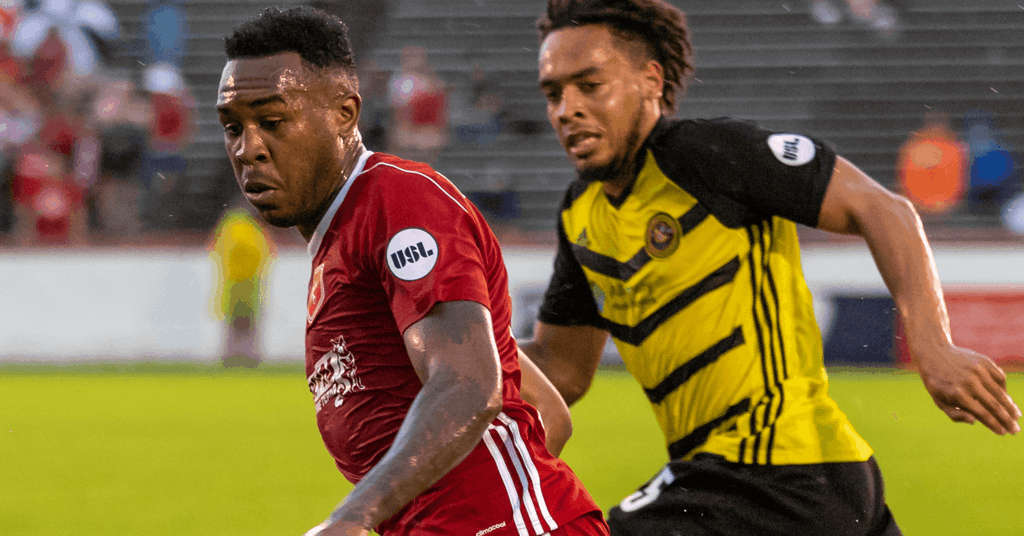 RICHMOND, VA — (Saturday, June 2, 2018) — The Richmond Kickers (3-6-1) missed out on an opportunity to gain some points at home, falling 1-2 to Pittsburgh Riverhounds SC (5-6-1) from City Stadium. After a scoreless half, Luiz Fernando came on as a substitute and opened the scoring with a tap-in goal in the 54th minute. Trailing 1-0, the Riverhounds brought on their leading goalscorer Neco Brett in the 66th minute. Just a few minutes later, Brett tied the score on a header right in front of the net. Pittsburgh scored the eventual game-winner in the 79th minute after Brett connected with Romeo Parkes behind the defense, and Parkes converted on the one-time volley.

Pittsburgh had the first major opportunity of the match in the 8th minute when Raymond Lee made a run down the left sideline. He crossed it into the box and picked out Romeo Parkes, but Parkes unleashed a header over the crossbar.

The Riverhounds threatened again when Kevin Kerr received a pass in the corner of the box in the 20thminute. He sidestepped a defender and fired a shot from just outside the box out that skidded into the arms of Richmond goalkeeper Trevor Spangenberg.

Off a corner, Brian Shriver played a short pass to Yudai Imura in the 27th minute. Imura sent a cross that was destined for the back post and Pittsburgh goalkeeper Daniel Lynd ended up deflecting out for a corner. Just a minute later, Imura again fired in a cross that found Mekeil Williams. Williams’ uncorked a header and Lynd again made a diving save.

In the 38th minute, Romeo Parkes curled a shot from about 25 yards out for the Riverhounds. Parkes’ shot was just wide of the left post for a Richmond goal kick.

The game entered the half tied 0-0. Pittsburgh owned 53.6 percent of the possession and outshot Richmond 10-1 in the first 45 minutes.

The Kickers had their breakthrough in the 54thminute. Trevor Spangenberg started the attack with a long throw down the right sideline to Heviel Cordovés. Cordovés played a through ball to a cutting Brian Shriver who laid it off for Luiz Fernando. Fernando did the rest and tapped it into the back of the net before Pittsburgh goalkeeper Daniel Lynd could get back in position, giving Richmond a 1-0 lead. Fernando, who came on as a substitute, tallied his first league goal of the season and third goal overall.

Richmond nearly doubled its lead in the 63rd minute off a counterattack. Heviel Cordovés broke free and only had one man to beat. He rifled a shot from outside the box that just skirted to the outside of the post for a goal kick.

The Riverhounds found their equalizer in the 72ndminute. Ben Zemanski connected with Kevin Kerr in the box who played it across goal to Neco Brett. Brett headed it into the netting for his team-leading sixth goal of the year. Brett’s goal tied the game 1-1.

Pittsburgh kept attacking and took the lead in the 79thminute. Neco Brett flicked a pass over Richmond’s high line to a cutting Romeo Parkes. Parkes only had the keeper to beat and gave the Riverhounds the 2-1 lead on the left-footed volley.

Kickers’ midfielder Oscar Umar was sent off in the 86th minute and Richmond was forced to play the last several minutes with 10 men. Richmond never threatened down a man and Pittsburgh walked away with the 2-1 win on the road.

The Kickers have a quick turnaround, traveling up I-95 to face the Philadelphia Union of Major League Soccer in the Fourth Round of the 2018 Lamar Hunt U.S. Open Cup Tuesday night, June 5. Kickoff for that match is at 7:00 p.m. and will be streamed live on ussoccer.com.

Richmond will conclude its homestand by welcoming longtime rivals, the Charleston Battery to City Stadium, Saturday, June 9 for Kickers Fiesta. The party starts at 5:30 pm with live Salsa music, all-you-can-eat Chicken Fiesta Taco Bar and Modelo on tap for just $22 ($16 for Season Ticket Holders). Tickets are on sale now at RichmondKickers.com.