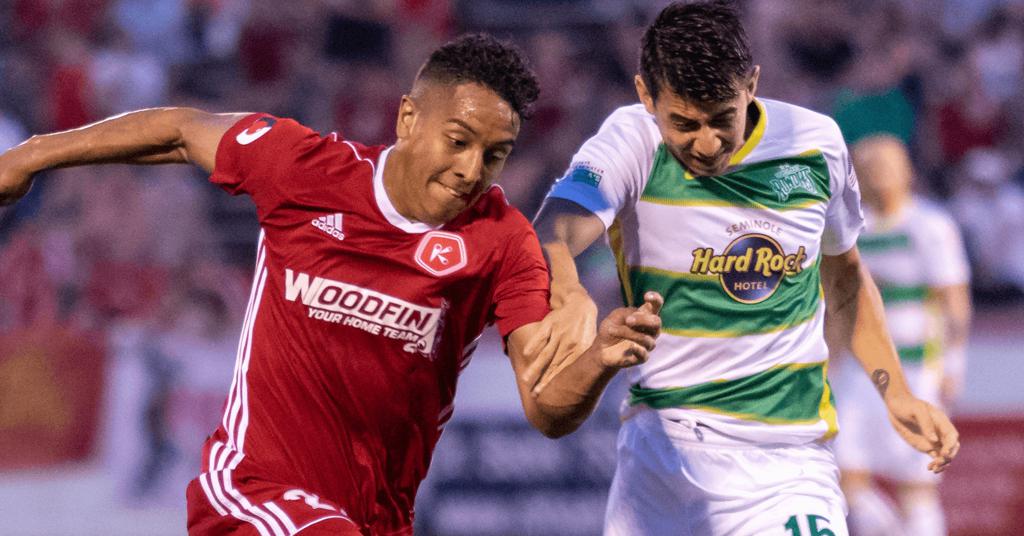 RICHMOND, VA — (Wednesday, May 12, 2018) — The Richmond Kickers (3-4-1) picked up the 1-0 win on Saturday night from City Stadium, defeating the Tampa Bay Rowdies (4-5-0). Dane Kelly scored the lone goal in the match in the 38th minute, his 67th career USL goal. Richmond’s defense stood strong the rest of the match and goalkeeper Travis Worra tallied his first clean sheet of the season. The Kickers won their first of four straight league games at home while the Rowdies have now lost three straight overall.

"I thought it was a little slow start for us, but we grew into the game," said head coach Leigh Cowlishaw. "In the second half, we just tried to have a little bit more possession and move them around a bit more.

"Dane scores confidently at this level. He was in the right place for the one, he’s always a threat in behind, and he has a lot of experience."

The Rowdies nearly took the lead in the 14th minute from a set piece. Marcel Schäfer fired a ball into the box and found a diving Neill Collins. Collins’ header was just wide right of the post and Richmond walked away unscathed.

Richmond had the next opportunity when Raul Gonzalez made a move down the right sideline in the 22nd minute. He connected on a cross into the box to Yudai Imura, but he could not get a good foot on the ball and sent it wide of the Rowdies’ goal.

Tampa Bay threatened in the 28th minute off a corner kick. Michael Nanchoff took the corner and found the Rowdies’ top goal scorer, Georgi Hristov, right in front of the net. Hristov’s header was saved by Richmond’s Travis Worra in a crowd of players.

The Kickers got their breakthrough in the 38th minute. Austin Yearwood played a ball into the box off the left wing and found Dane Kelly just inside the six-yard box. Kelly, the 2017 USL Golden Boot and MVP winner, gathered the ball and booted it past Rowdies’ goalkeeper Cody Mizell with his right foot. It was Kelly’s first goal with the Kickers and Yearwood’s second assist in as many games.

"It feels good," Kelly said. "As a striker, you want to be on the score sheet no matter what, and to get a goal tonight and to give the team three points, that’s awesome."

"During warm ups, Dane and I were connecting well with crosses and finishing, so that carried over into the game straight away," Yearwood said.

The Rowdies controlled the ball for the majority of the first half with 56.6 percent of the possession despite the Kickers 1-0 advantage heading into the locker room. Tampa Bay also outshot Richmond 6-3, but the Kickers won 29 duels compared to Tampa Bay’s 16 in the first 45 minutes.

In the 57th minute, Richmond’s Raul Gonzalez found a streaking Brian Shriver down the left side. Shriver received the pass, cut towards the center of the pitch, and fired a shot from about 20 yards out into the chest of Rowdies’ Cody Mizell.

Oscar Umar earned a penalty for Richmond when his shot deflected off Max Lachowecki’s hand inside the box. Yudai Imura stepped up to the penalty spot, but his shot was saved by Mizell and cleared away from danger in the 66th minute.

Tampa Bay had a chance in the 78th minute when Marcel Schäfer made a run and sent a cross into the box. Sebastián Guenzatti collected the pass in the box, but took an off-balanced shot that Travis Worra easily gobbled up for the save.

Richmond almost doubled its lead on an 89th minute counterattack. Heviel Cordovés gathered the pass and ran down the left sideline before sending a ball into the far post for Braeden Troyer. Troyer’s shot just missed wide right of the goal post.

Travis Worra made a big save in the 90+ minute off the last-gasp effort from Tampa Bay to secure the win for the Kickers.

Following the match, the Kickers has a mid-week tilt on Wednesday, May 16 against Reading United AC as a part of the Lamar Hunt U.S. Open Cup. Reading United AC defeated Christos FC 5-4 in penalties after a 1-1 draw at the end of extra-time. Kickoff is set for 7 p.m. at Alvernia University in Reading, Pennsylvania. The Kickers will return to City Stadium May 26 for Red, White and Brews presented by Impawsible Pups. The dog-friendly wine and beer fest starts at 5:30 p.m. with live music by The Hit List, pet-centric vendors, over a dozen craft beers on tap, a selection of wines, and legendary hot dogs fresh off the grill from Joey’s Hot Dogs. Then, the Kickers take the field as they take on the Charlotte Independence at 7:00 p.m. Tickets are on sale now at RichmondKickers.com.