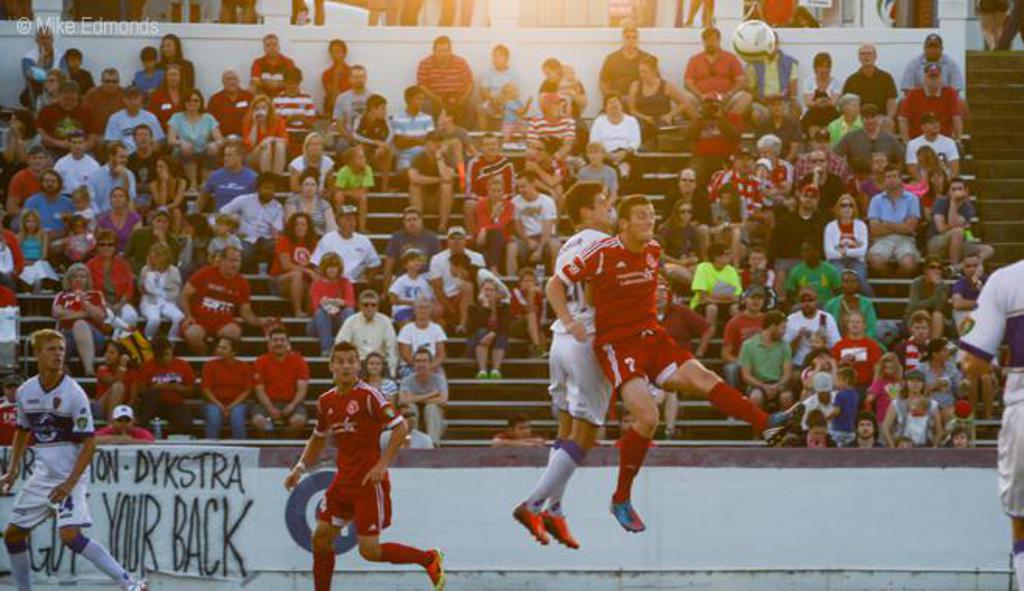 RICHMOND, VA – The Richmond Kickers claimed the 2013 USL PRO Regular Season Championship Wednesday night, thrilling a crowd of 4,921 with a 2-0 win over Orlando City. A first half Matthew Delicâte double carried the Kickers to their sixth Regular Season title as goalkeeper Andrew Dykstra backstopped a stalwart defense with five saves to preserve his league-leading 10th shutout to close out the Kickers’ regular season home finale in style.

With home field advantage through the playoffs on the line, the Kickers tested Orlando goalkeeper Miguel Gallardo in the 15th minute when midfielder Nate Robinson served a corner into the box. Joseph Ngwenya leapt to win the ball in the air 10 yards out but his header ricocheted off the near post and into side netting.

Seconds later, a nice series through the midfield saw Mike Callahan and Luke Vercollone combine to spring Delicâte free inside the box but Gallardo was ready and waiting and smothered the ball off his foot.

Delicâte was not to be denied again and opened scoring with a pair of goals in a five minute span starting when Ngwenya sliced a cross into a swarming box in the 24th minute. The ball took a fortuitous deflection into the path of an onrushing Delicâte who slotted a low driven ball just inside the left post.

Soon after, the Kickers all-time leading scorer got on the end of a well-placed Brian Ownby cross from deep on the left wing and punched a side-footed volley into the back of the net to send the home side into the locker room with a two-goal lead.

The Lions fired out of the gates after the restart and earned the opportunity to pull a goal back when Dykstra brought down Long Tan in the box on the hour mark. Midfielder Kevin Molino lined up the penalty but his chance would go begging as he skied the spot kick over the crossbar.

Fifteen minutes later, Tan blasted a distance shot that forced Dykstra to leap to his right to parry it over the end line. The resulting corner kick flew into the fray as defender Rob Valentino broke free at the back post and fired on target but Callahan’s heroic header off the line kept the visitors scoreless.

The Kickers answered back in the 78th minute when Vercollone raced down the right wing and played a through ball to Ngwenya at the top of the box. As Gallardo came out to challenge, the Zimbabwean International rounded the diving ‘keeper and faced a wide open net only to hook his shot to left as his effort whizzed inches past the upright.

In the waning minutes of regulation, midfielder Freddie Braun casually slotted a cross to a streaking Molino in the penalty area but his rocket shot did not elude Dykstra who preserved the club’s 11th shutout of the season.
The Richmond Kickers conclude the 2013 regular season on the road this Saturday, August 17 when they take on the Pittsburgh Riverhounds. The match will be broadcast on USLnation.com, live from Highmark Stadium at 7:00 p.m. The Kickers return to City Stadium one week later to host the USL PRO Quarterfinals on Saturday, August 24 at 7:00 p.m. Tickets are on sale now at RichmondKickers.com.