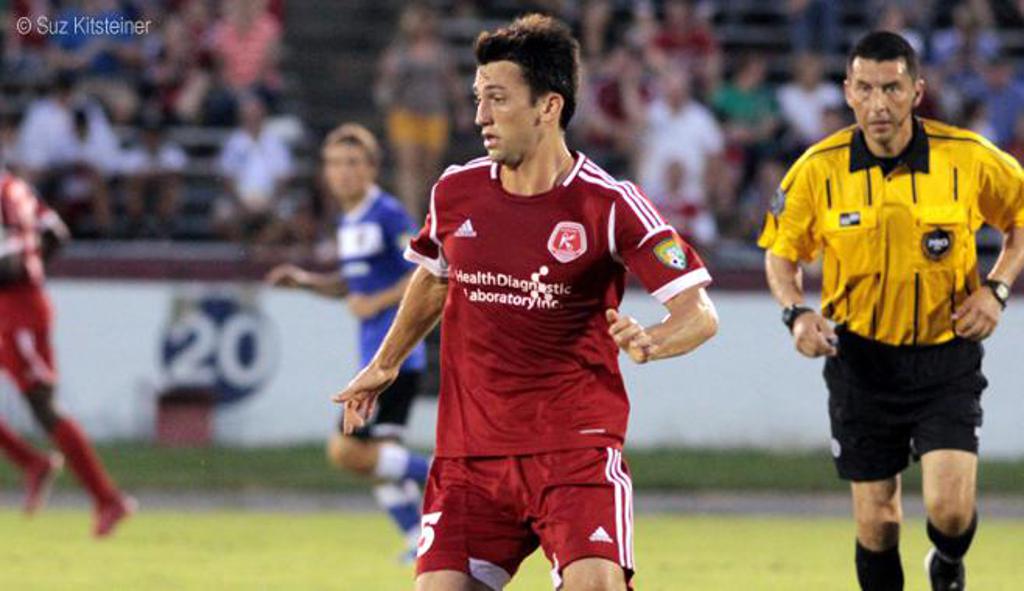 RICHMOND, VA – The Richmond Kickers fell 2-1 to the Charlotte Eagles in the USL PRO Semifinals Saturday night.  After taking an early lead on a Mike Callahan tally, the Kickers conceded two first half goals courtesy of Christian Ramirez and Nate Thornton that went unanswered through regulation to dash their dreams of a USL PRO Championship appearance next weekend.

With the chance to host the final on the line, the Kickers opened scoring in the 12th minute when Brian Ownby battled for the ball on the left wing, forcing Eagles defenders to clear it over the end line.  Lining up the resulting corner kick, the midfielder served an inswinger into the box, finding Callahan in the air who made no mistake from the top of the six yard box.

Defender Conor Shanosky nearly doubled the score nine minutes later when a corner pinged through the box before falling to Joseph Ngwenya.  The Zimbabwean International lofted the ball back into the mix as the big defender leapt to get a nod but his close range header skimmed just over the crossbar.

Ngwenya was dangerous again in the 24th minute when he controlled the ball at the top of the box and laid it off for Ownby who skied his shot from the right side of the box.

The Eagles leveled the score just past the half hour mark when midfielder Ben Newnam carried the ball deep on the left wing and sliced a perfectly placed cross into the box.  An unmarked Ramirez dove from six yards to redirect a header into the back of the net.

Looking to regain the advantage in the 37th minute, defender Alex Lee trapped the ball in the midfield and sprung Ownby free behind the defense.  The Kickers playmaker took one touch but blasted a rocket shot high from the top of the box.

Weathering the offensive pressure, the Eagles turned the tables and struck again two minutes later.  Midfielder Stephen Okai eluded defenders at the top of the 18 and slotted a cross through to an onrushing Thornton.  Facing Kickers goalkeeper, Andrew Dykstra, 1v1 he struck to the near post and his shot rolled just under the keeper’s legs to give the visitors the lead heading into the break.

The Kickers nearly pulled the goal back just after the restart when Ngwenya warded off defenders on the right wing, drawing Eagles goalkeeper Eric Reed off his line and leaving forward Matthew Delicate with a wide open shot from the penalty area but an Eagles defender cleared his chance off the line.

In an effort to clear the ball in the 51st minute, Dykstra’s missed clearance fell to Ramirez who fired from 16 yards but the Kickers goalkeeper was able to get a finger tip on his shot to parry it past the upright.

Later, defender Henry Kalungi slotted a through ball to Nate Robinson who took one touch and then out-paced his mark to keep it from going over the endline.  He played the ball back to Ownby who settled it and lobbed a cross to Delicate but the forward’s header from point blank range dipped just over the crossbar.

Dykstra soared into action five minutes later when the Eagles retaliated with a dangerous play that saw midfielder Juan Guzman slot the ball back to Sergio Villasenor who laid it off to Herrera 20 yards out.  The swift forward played the ball wide to Ramirez but his whistling shot was denied by the Kickers lunging goalkeeper.

He immediately distributed it out to Ngwenya who carried the ball the length of the field and squared the ball at the last second for an onrushing Michael Seaton who one timed a shot from six yards out but Reed’s reaction save prevented the equalizer in the waning minutes to end the Kickers season just shy of the Championship.