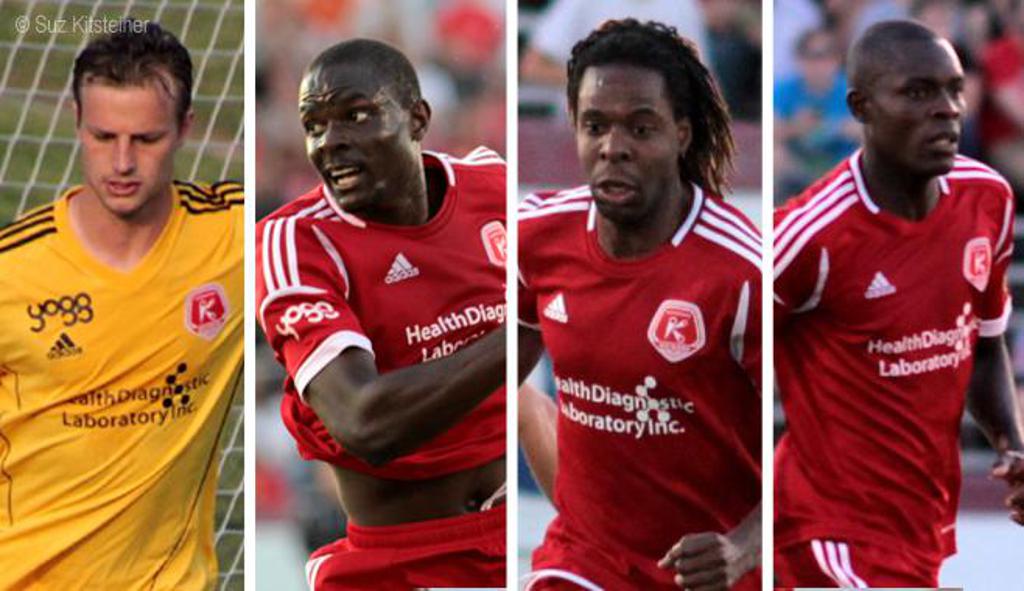 Joining the Kickers for much of the season on loan from the club’s MLS affiliate, D.C. United, Dykstra claimed the USL PRO Goals-Against Average award as he finished the regular season with a GAA of 0.863. Dykstra was a key factor for the stingiest defense in USL PRO, leading the league with 10 shutouts in 22 appearances, posting a 13-1-8 goalkeeper record en route to the Kickers’ USL PRO Regular Season Championship.

Named to the USL All-League First Team for the fifth consecutive season, Yomby was the only player to play in all 30 regular season, U.S. Open Cup and playoff games during the 2013 campaign, leading the team with 2,578 minutes.  Integral on both sides of the ball, the native of Cameroon added a goal and an assist while allowing just 24 goals in 26 regular season games and contributing to 13 shutouts overall.

A first-time All-League honoree, Kalungi has made 123 appearances with the Kickers over the past five seasons, contributing to 52 shutouts while splitting time with the Uganda National Team.  Named team captain in 2012, he has anchored one of the league’s best defensive units en route to the 2009 USL PRO Championship, 2010 USL PRO Finals, 2011 U.S. Open Cup Semifinals and 2013 Regular Season Championship.

Richmond newcomer Joseph Ngwenya cemented himself as the club’s leading scorer this season, notching his 11th goal in the Kickers 1-0 win over Dayton in the USL PRO Quarterfinals.  Adding six assists for 28 points overall, the Zimbabwean International brought eight years of MLS experience to Richmond, and finished ninth in the league with 23 points during the regular season.