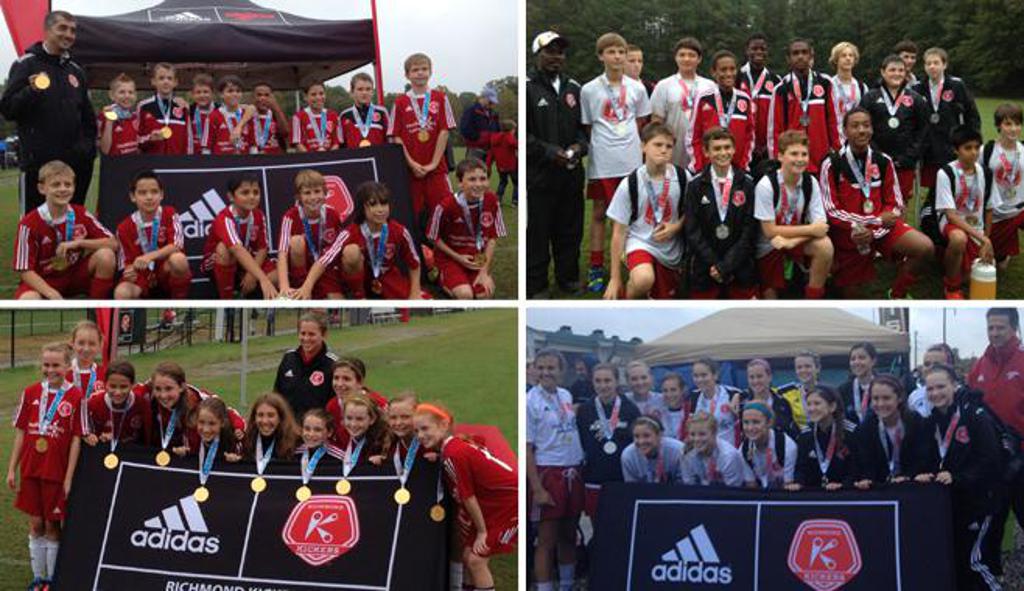 Fifteen Richmond Kickers Classic teams were runners up in this weekend’s Columbus Day Tournament and eight teams were crowned Champions.

The U13 Boys South team lost a seven goal thriller to SYC Lions Gold after three victories in the group stage, and the U14 Boys South team lost in the final after beating VA Legacy Wizards 2-1 in the semifinal. The U14 Girls South team competed in the top bracket and conceded a close final, 2-0, to PA Classics Premier with the U14 Girls Central team also having a good weekend, finishing second and going unbeaten with two wins and two ties.  The U14 Boys Central finished second in their division with a 3-1-0 record and the U15 Girls Central were runners up in the top division going 2-1-1 on the weekend.  There were also two U16 teams that finished as Finalists this weekend as the U16 Boys Mechanicsville team were beaten 3-0 by LMVSC and the U16 Girls Central team lost 2-0 to Churchland Impact in the finals.

It was also a great weekend of soccer for the Kickers U10-U12 teams. Seven Kickers teams finished as runners up in their divisions, including U10 Boys Collegiate Sounders, U10 Boys Elite Red, U11 Boys South Red, U11 Boys Central Tottenham, U12 Boys North Ajax, U9 Girls, and U10 Girls Elite White Flash.  The U12 Girls Collegiate were Champions of their division, going undefeated on the weekend before beating St. Mary’s United Blaze 2-1 in the final.  The U10 Girls Elite Red Stars won the top bracket of the U11 Division with a 3-0-1 record on the weekend and the U11 Girls South Destiny picked up the Championship title with a decisive 3-0 win over the Suffolk Earthquakes Sunday.  Meanwhile, the U11 Boys South Real ousted New River United U11 Boys Skyline 2-1 to take top honors in their division.

Congrats to all the Champions and Finalists, and to all teams who particiated in a great weekend of soccer!