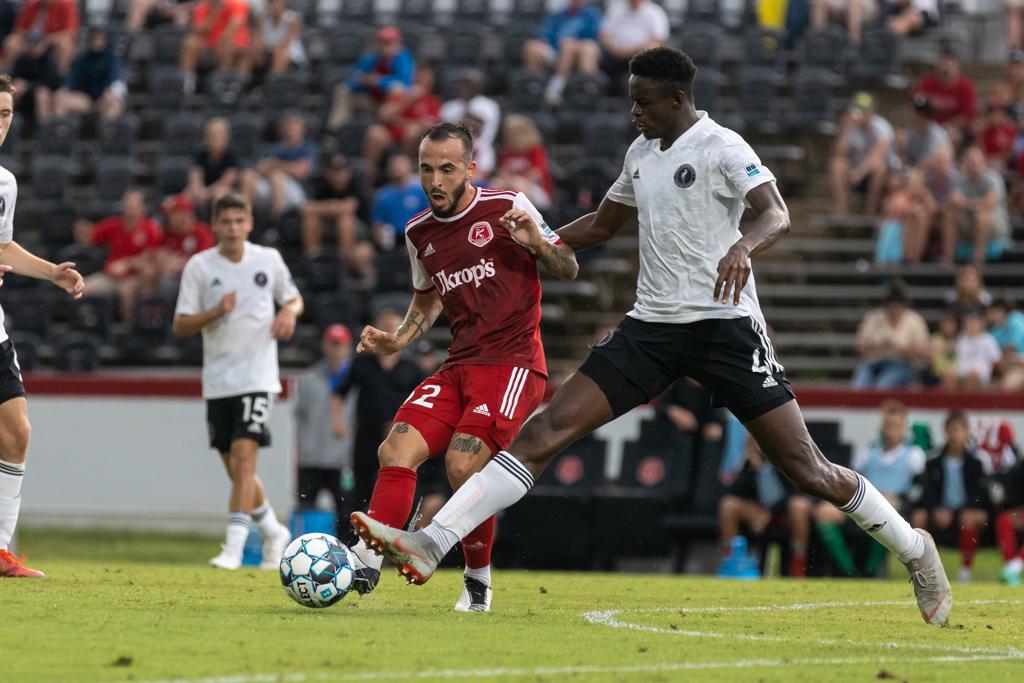 RICHMOND, Va — The Richmond Kickers (4-4-4) battled back from behind to earn a crucial point at home, Saturday night, against MLS affiliate Fort Lauderdale CF (5-7-3) despite experiencing a cumulative two hours and 25 minutes of lightning-related delays.
The match started rocky after kickoff was delayed for 46 minutes. The Reds played forward early but were caught on the break in the sixth minute as Fort Lauderdale slotted a shot to beat Akira Fitzgerald and bring the scoreline to an early 1-0. Around the 21st minute, Emiliano Terzaghi earned a free kick outside of the Fort Lauderdale box. Ivan Magalhães stepped up for the direct kick but his shot flew just over the crossbar.
After another 15 minutes of back-and-forth play between the two sides, Richmond received the ball in a dangerous area and Stanley Alves fired off a side-footed volley at goal, but his attempt would fly just over the crossbar leaving eight minutes remaining of the first half. Richmond opened up even more creatively with a series of plays involving intricate flicks and passes into the box. The Reds would finish the half owning possession and duels won but the scoreline cruelly did not reflect the play.
Just several minutes into the second half, the game was delayed again because of lightning and the delay would keep both sides off the field for over an hour and a half.
Finally, both sides walked out of their respective locker rooms at 10:04 pm to resume play. The Kickers started off strong with a good counterattack and a shot by Matt Bolduc that was deflected for a corner by goalkeeper Drake Callender. In the 57th minute, Alves took on two Fort Lauderdale defenders with a few stepovers to get a shot off but his shot would once again pass just over the crossbar. Richmond's renewed vigor and intensity earned the team overwhelming possession and quality chances created.
Richmond would continue on the front foot for another several minutes of heavy attacking play. At the 80-minute-mark, Chris Cole would lead the attack with a direct run at the Fort Lauderdale box to get a shot off but it would go wide of the post. Shortly after, Oalex Anderson, a substitute in the 72nd minute, carried the ball on the left wing, beat his defender, and put in a ball for Terzaghi to side-foot into the back of the net -- leveling the scoreline for Richmond with only several minutes left.
Richmond pressed for the go-ahead but saw out the remainder of the 90 minutes to earn a point at home as a consolation. Coach Sawatzky praised his team's resilience to overcome numerous delays and earn a comeback result during post-match comments with the media.
Richmond's next match will be Wednesday, July 21 at North Carolina FC for the teams' third matchup this season. Kickoff at Sahlen Stadium is set for 7:00 p.m.
Stay up to date with the latest news from the Kickers at RichmondKickers.com and on the official team app.