The forward scored two goals and assisted the game-winner, Saturday

TAMPA, Fla. -- Richmond Kickers' forward Emiliano Terzaghi was named the Cleer Audio Player of the Week by USL League One, Monday, following Terzaghi's two goals and assist of the match-winner in the Kickers' 3-2 victory over North Texas SC.

"I am very happy for the recognition, but even more for getting a victory that we needed and being able to give it to the fans in our house," Terzaghi said.

The reigning league MVP was instrumental in orchestrating the Reds' come-from-behind victory at City Stadium, Saturday night. After Richmond conceded the opening goal, the home side struck back quickly thanks to the enterprising play from the attack. Victor Falck launched a long-range effort that could only be deflected by the North Texas keeper. Juan Pablo Monticelli quickly gathered the rebound and recycled it into the mixer. Terzaghi got in front of his defender but at an angle where the only option was the spectacular. So the Argentine kicked his leg out and guided the ball into the net with the back of his heel. 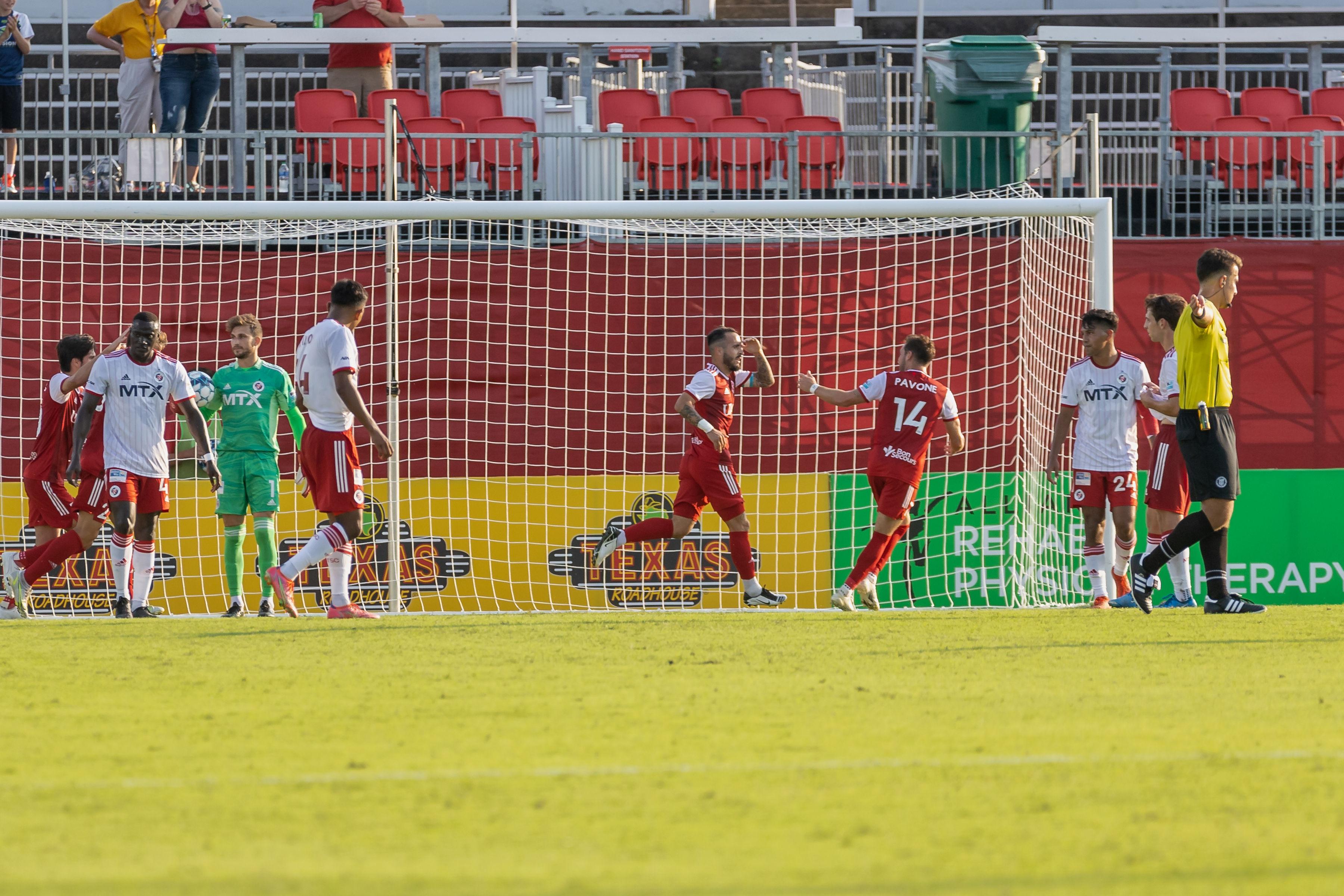 North Texas would find a second goal before the end of the first half, but Terzaghi would deliver a second equalizer shortly after the beginning of the second half. The forward made a dangerous run into the North Texas penalty area during the buildup and was fouled. The referee pointed to the spot, and Terzaghi cooly walked over to take the penalty kick. The veteran used a methodical approach to send the keeper the wrong way while Terzaghi calmly guided the ball into the bottom left corner. 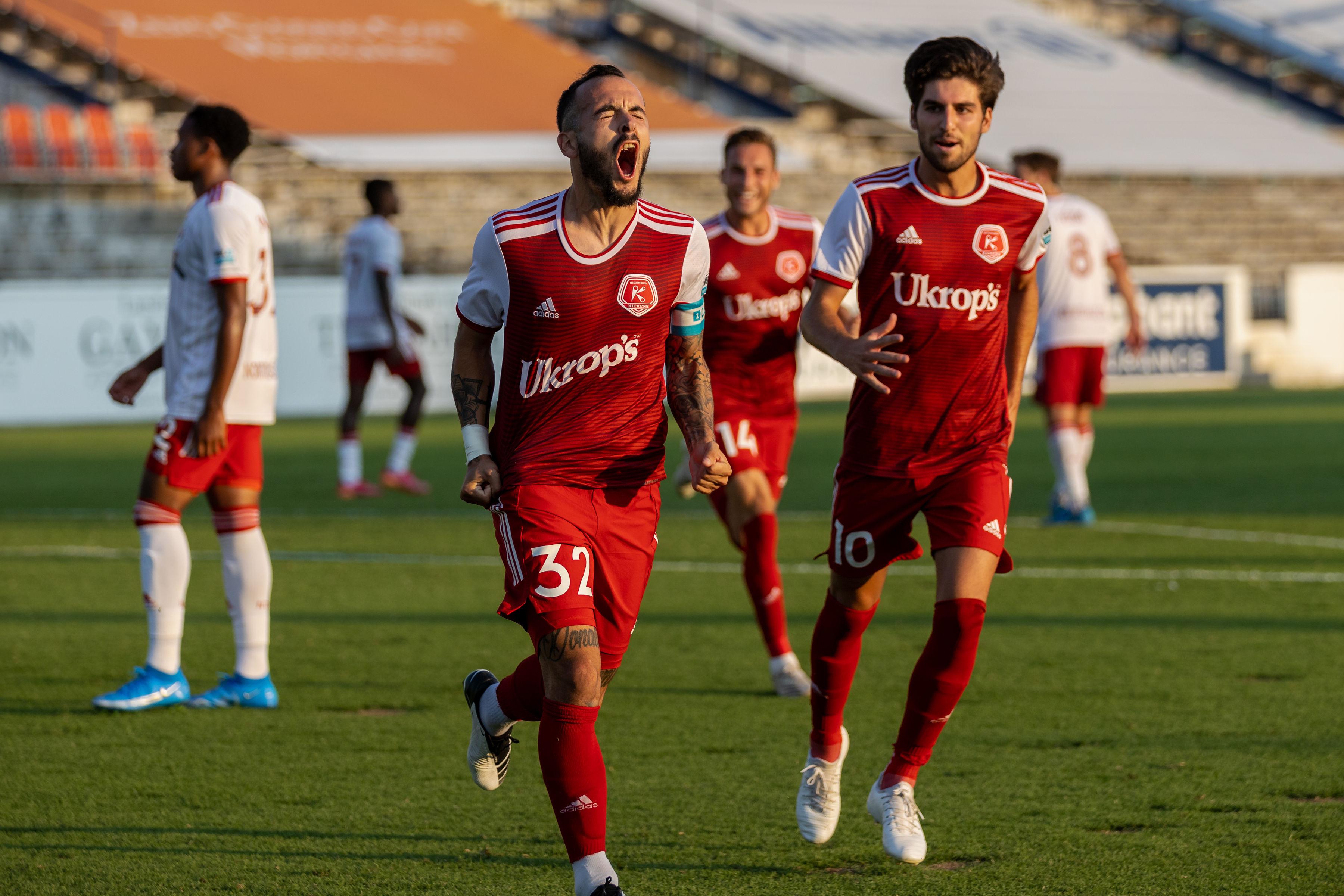 Soon after, Terzaghi would gather a loose ball in the opposition half and quickly flicked the ball to Jonathan Bolanos who raced up the left-wing. The forward used his left foot to hit a floating ball near the backline that drifted over the keeper's head and clanged off the right post and into the back of the net. Bolano's effort off the Terzaghi assist would prove to be the match-winner as the Kickers saw out the remainder of the match with its 3-2 lead intact. 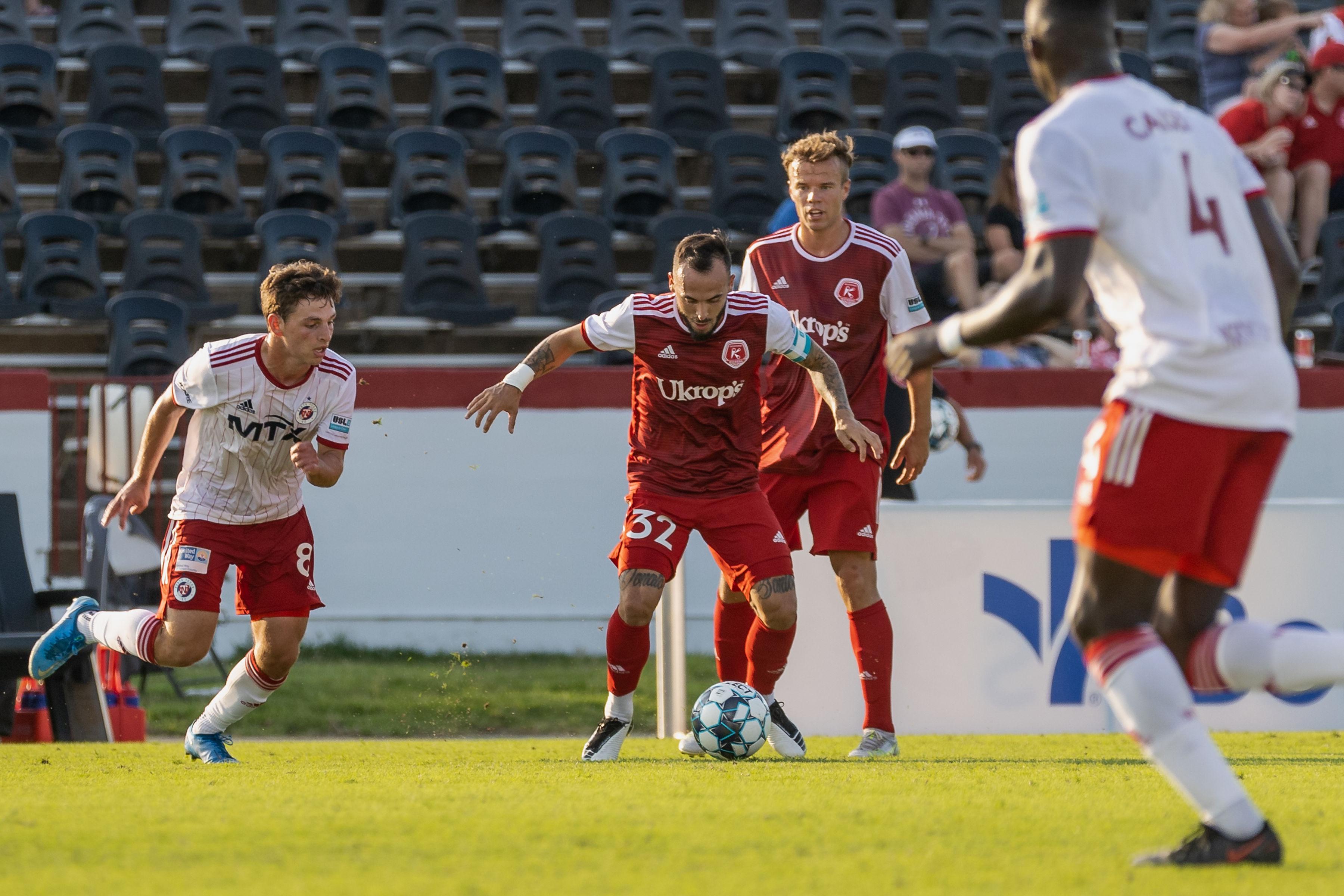 “I am happy for Emiliano," Richmond Kickers' Chief Sporting Officer and Head Coach Darren Sawatzky said. "He has had a lot going on in his life this year and to find a couple goals and lead our team to a comeback win at home was great.  Recognition for hard work is always good and I know he shares the shout with his teammates."

Terzaghi finished the match with three-goal contributions and it was the second time this season that he scored two goals in a match -- the first time coming against South Georgia Tormenta FC in early May. On top of affecting the scoreline, Terzaghi led the Reds with four (4) key passes, 14 of his 20 total passes coming in the opposition half along with 14 total good passes or crosses across the pitch. He also led the team with two (2) fouls won including the incident that led to the penalty given.

This marks the first time Terzaghi was named Cleer Audio Player of the Week by USL League One during the 2021 season. Terzaghi previously was named to the league's team of the week for his efforts during the fifth match week. Terzaghi joins Monticelli and Nil Vinyals as the Kickers' players that have earned player of the week honors this season. 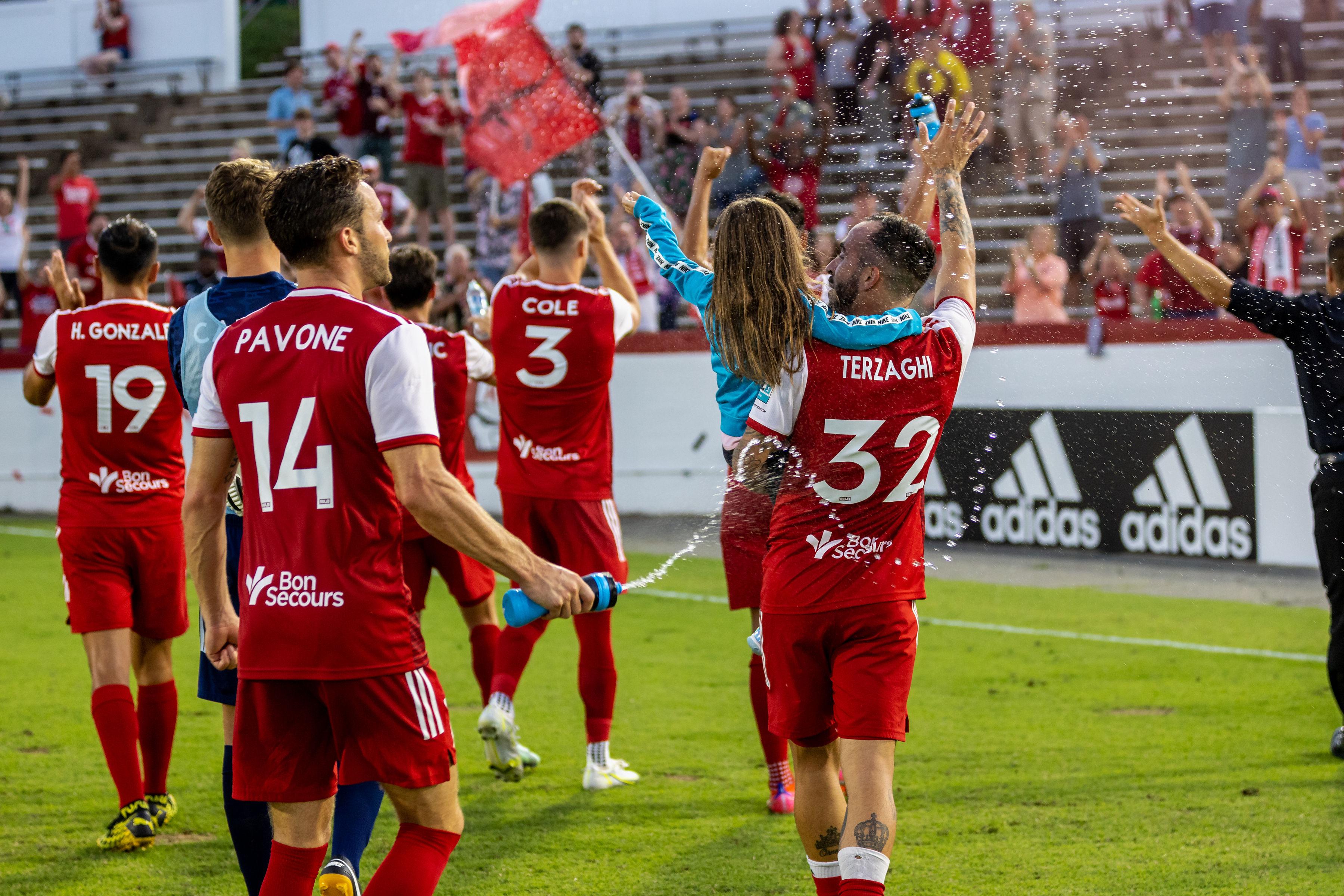 The Kickers will enjoy an off weekend before returning to City Stadium on Saturday, July 17 to host Fort Lauderdale CF -- the affiliate club to the MLS' Inter Miami CF. Kickoff for that match is set for 6:30 p.m. Tickets for that match are available at richmondkickers.com/tickets.

USL League One Team of the Week - Week 13 Full Release:

TAMPA, Fla. - USL League One announced on Monday the Team of the Week Presented by Cleer Audio for Week 13 of the 2021 regular season, with Richmond Kickers forward Emiliano Terzaghi named Player of the Week after recording two goals and an assist in his side’s 3-2 comeback win against North Texas SC on Saturday.
The Argentine attacker leveled the game twice with goals in both the first and second halves. The former was a fantastic, inventive heel flick, and the latter a clinical take from the penalty spot. Terzaghi then set up teammate Jonathan Bolanos for the game-winning goal, helping the Kickers pick up a valuable three points.
Greenville Triumph SC’s dominant 3-0 win against the New England Revolution II sees the team lead all clubs with three players represented in this week’s team.
GK - Caleb Patterson-Sewell, Toronto FC II: The veteran goalkeeper was spectacular for TFC II in its Wednesday away win against South Georgia Tormenta FC, making eight saves to preserve the result for his side.
D - Christian Diaz, Forward Madison FC: Diaz was everywhere for Madison on Wednesday night, contributing at both ends of the pitch in the Flamingos’ 1-0 win against New England. He created three chances, made three tackles, won 10 duels and was fouled three times - all game-highs.
D - Damia Viader, Union Omaha: The Spaniard continued his strong season on Saturday night, putting in a shift as Omaha ended the game with 10 men in a 1-1 draw with Chattanooga. He led all players in the match in duels won (12), dribbles completed (six), and tackles made (three).
D - Abdi Mohamed, Greenville Triumph SC: Mohamed’s excellent through ball set up Marios Lomis for the opening goal in Greenville’s 3-0 away win against New England on Sunday. The fullback also made six clearances, won four duels, and created two chances to go along with two tackles.
M - Charlie Dennis, FC Tucson: Dennis assisted Tucson’s game-winning goal against Fort Lauderdale on Sunday, just one of six chances in total he created. He also led all players in the match with 10 duels won, drew five fouls, and passed at a 95 percent success rate.
M - Aaron Walker, Greenville Triumph SC: Walker created three chances in Greenville’s win against New England, one of which turned into an assist when Lomis finished it off in style. The midfielder also won seven duels, made two tackles, and recorded six recoveries.
M - Noble Okello, Toronto FC II: In addition to scoring the opening goal of TFC II’s win over Tormenta last Wednesday from the penalty spot, the Canadian international led all players in the match with four completed tackles and won six duels to boot.
M - Manuel Ferriol, FC Tucson: Ferriol made a massive impact as a late substitute in Tucson’s win against Fort Lauderdale. He scored the game-winning goal in spectacular fashion from the edge of the area just moments after entering the game, and completed 100 percent of his passes in the closing stages while also winning 3 of his 4 duels.
F - Emiliano Terzaghi, Richmond Kickers: On top of his contributions to all three of his team’s goals in a narrow win, Terzaghi led all players in Richmond’s victory over North Texas with five total chances created.
F - Marios Lomis, Greenville Triumph SC: Lomis scored a terrific hat trick to lift Greenville to a momentum-building 3-0 win over New England on Sunday, making him the first player in League One this season to reach double-digit goals. His tally of 11 sees him atop the Golden Boot race.
F - Mark Hernandez, Chattanooga Red Wolves SC: In a season where Chattanooga has seemed to score late in every one of its matches, it was Hernandez’s turn to play the hero on Saturday. His equalizer in second-half stoppage time picked up what could be an all-important road point for the Red Wolves come the end of the season.