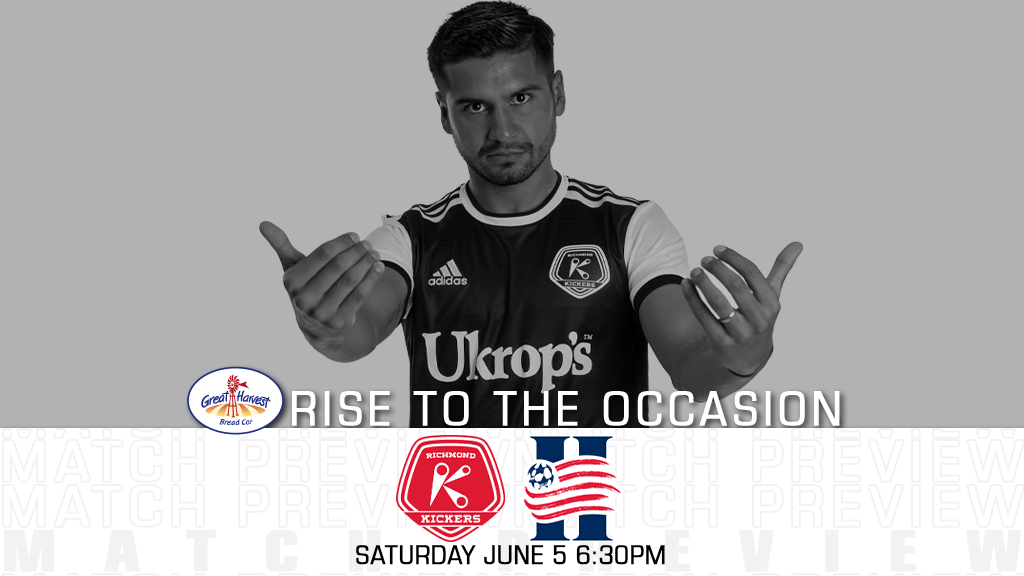 The Rise to the Occasion Match Preview is presented by Great Harvest Bread Co.

Internet: ESPN+
TV (Local): WTVR CBS 6
RICHMOND, Va. – The Richmond Kickers (2-3-1) return to City Stadium to host New England Revolution II (2-2-1), Saturday, June 5. Kickoff for this match is set for 6:30 p.m. ET.
After a turgid first-half stalemate, Richmond came out onto CHI Memorial Stadium and netted a goal in the 47th minute. What started as a stab at the ball by Emiliano Terzaghi at the half line turned into a brilliant exchange of one-two passes on the left wing, which sent Oalex Anderson dashing up into Chattanooga territory. Nearing the goalkeeper, Anderson placed a curling effort through the danger area that was deflected by a Chattanooga defender into the wide-open net to bring the scoreline to 1-0.
With the lead, Richmond looked to capitalize on playing up the left-wing as Anderson’s pace was getting the better of the Chattanooga right side. However, in the 53rd minute, Ricky Ruiz answered back after a long Chattanooga throw-in made its way into the right side of the penalty area only to be lofted centrally for Ruiz to finish it off. Then in the 84th minute, Juan Galindrez came on to seal the win with a shot from a dead ball in the Richmond box.
The Kickers return to City Stadium to take on New England Revolution II for the second time this season. The Reds opened their season on the road at Revs II with a 3-0 win following Anderson, Jonathan Bolanos, Juan Pablo Monticelli, and Anderson opening their 2021 scoring accounts. The team took nine shots on goal and had five players finish with a passing accuracy of 80% or higher.
Since that opening fixture, New England’s form has followed that of the Kickers closely. The Revs most recently played Fort Lauderdale, beating them 1-0, for the second time this season, and last week played Chattanooga, tying the Red Wolves 2-2. However, New England’s squad has only scored four goals this season and held two clean sheets. With both the Kickers and Revs II level on points in the middle of the table, a win would provide a significant boon for either side.
The Kickers and City Stadium will be celebrating Pride Night with a focus and attention on the LGBTQ+ community on June 5 and will be selling tie-dye and player-signed jerseys as well as pride magnets and stickers. The profits will be donated to Virginia Pride, a local organization that works in the LGBTQ+ community.
The Richmond Kickers and the Richmond Strikers also plan to commemorate David Bulow in a pregame ceremony at Saturday’s June 5 match at City Stadium.

Taking place shortly before Saturday’s 6:30 pm kickoff, the ceremony will be led by representatives of both the Kickers’ organization and Bulow’s Richmond Strikers U19 Boys and Girls Elite Teams. A special tribute penned by members of both organizations will be read aloud over the public address during the ceremony. There will be a collection point inside City Stadium where fans can drop off cards or write memories of David that will be presented to the Bulow family.
Richmond’s next match will be at Forward Madison, for the first iteration of this season's Henny Derby. Forward Madison currently sits at second place in the table, undefeated and tied in points with Union Omaha and Chattanooga. Richmond won the only match of 2020 between the clubs with a 1-0 result at City Stadium after Emiliano Terzaghi scored the go-ahead goal in the first half.
Don’t miss a moment of the 2021 season at City Stadium with your Kickers+ subscription. Kickers+ is a brand new subscription service for the 2021 season that provides fans tons of value, flexibility, and sweet perks! Sign up today for only $59.99 - Kickers+ benefits include 50% off tickets to any regular season home match, 15% off merchandise at shop.richmondkickers.com, exclusive digital content, member events, and more! Click here for more info and to join today!
Stay up to date with all of the Kickers news at RichmondKickers.com and on social media on Facebook, Twitter, Instagram, and YouTube. Download the Richmond Kickers mobile app for news, contests, and more!

Akira Fitzgerald (#1) continues to show that he is a top goalkeeper in the league. The veteran stands tied for first in the league with three clean sheets so far this season including two at City Stadium. Fitzgerald also is nominated for USL League One Player of the Month for April/May.

Hernan Gonzalez (#19) has provided a new look for the Kickers upfront with his presence that may help against a New England team who likes to play with possession. Against Chattanooga, Gonzalez had a passing accuracy of 87.5% in the opposition’s half and made nine good passes or crosses.
Emiliano Terzaghi (#32) has continued to play a versatile role for the Reds. While he is tied for first on the team with two goals scored, he flashed his passing and defensive efforts against Chattanooga. Terzaghi intercepted a loose ball and played a one-two to Oalex Anderson which led to the opening goal of the match.