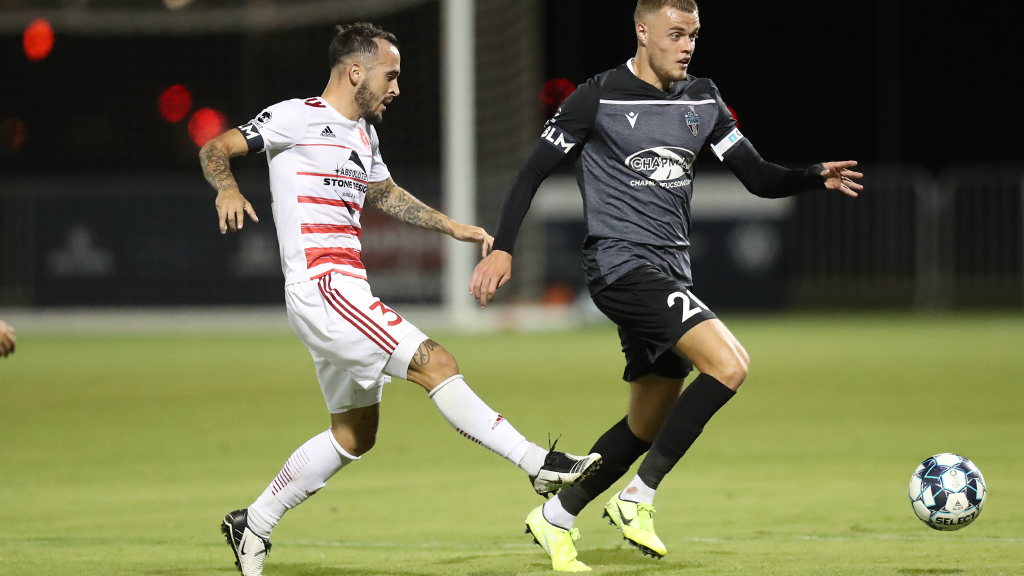 TUCSON, Ariz. — (Saturday, September 5, 2020) — The Richmond Kickers (4-1-2) salvaged a point on the road Saturday night, tying FC Tucson (2-4-1) 2-2 at Kino North Stadium. Roberto Alarcon converted a penalty and Shak Adams doubled the score five minutes later to give the home side an early two-goal lead. Emiliano Terzaghi scored his sixth goal in seven matches in the 40th minute to pull one back for Richmond. Deep into second-half stoppage time, Victor Falck leveled it for the Kickers, scoring his first professional goal.
Richmond looked for a chance to get on the board in the 8th minute. Terzaghi found himself on the left wing, near the endline. He got the ball back into the box that rolled to Matt Bolduc. Bolduc’s shot skipped just wide of the Tucson net.
Two minutes later, Tucson would convert from the penalty spot to take the early lead. Coming off a corner kick, Ivan Magalhães was whistled for a penalty after colliding with Azaad Liadi. Alarcon stepped up and put his shot to the left of Akira Fitzgerald, despite the Richmond keeper guessing correctly.
The home side would double their lead in the 15th minute. Carlos Merancio floated his goal kick all the way through for Shak Adams making a run. After getting past the Richmond backline, Adams launched a shot that found the back of the net.
Richmond had the help from the woodwork in the 22nd minute. Tommy Silva floated the ball over the top for Azaad Liadi. His run was timed perfectly to get the space for a shot from the left flank. The ball pinged off the crossbar and was eventually cleared by Richmond.
Emiliano Terzaghi continued his scoring streak in the 40th minute, this time from the penalty spot. Wahab Ackwei fought for the ball on the right wing and managed to get the ball into the box. As Terzaghi looked to get something on the ball, Samuel Biek pulled the Argentine down from behind. Terzaghi came up and sent Merancio guessing the wrong way to convert from the spot.
Just before halftime, Terzaghi looked for a brace. He dispossessed Raheem Sommersall, poking the ball away. Ryley Kraft quickly pushed the ball back for Terzaghi, shaking off a challenge from Biek. Turning towards the goal, Terzaghi looked for a shot as Merancio managed to get enough of a touch to push the ball wide of the net.
Akira Fitzgerald came away with a save in the 63rd minute. Charlie Dennis found Liadi lurking at the top of the Richmond box. He looked for a shot on frame as Ivan Magalhães got a foot on the ball. Fitzgerald fell to his left to make the stop and prevent a third goal from Tucson.
The Kickers had a chance to level the score with six minutes to go. Matt Bolduc held the ball at midfield waiting for the opportunity to spring Terzaghi on a run. Looking for a brace, Terzaghi went for goal but was denied by the foot of Merancio.
Victor Falck was the hero for Richmond deep into stoppage time. Terzaghi went long to Bolduc up the right wing. He quickly laid the ball back into the box as Merancio came off his line to prevent Stanley Alves from getting to the ball first. The ball rolled free to Mutaya Mwape, who launched a shot himself that was cleared off the line and out for a corner kick. Kraft came over quickly to serve the ball in, finding Falck in space at the top of the six-yard box to head home the tying goal -- his first professional goal.
The Kickers are back on the road next Saturday, September 12 as they head to the newly constructed CHI Memorial Stadium to face Chattanooga Red Wolves SC. That match will kick off at 1:00 p.m. EDT and will be available live on WTVR CBS 6.3 and streaming on ESPN+.

Stay up to date with the latest news from the Kickers at RichmondKickers.com and on the official team app.