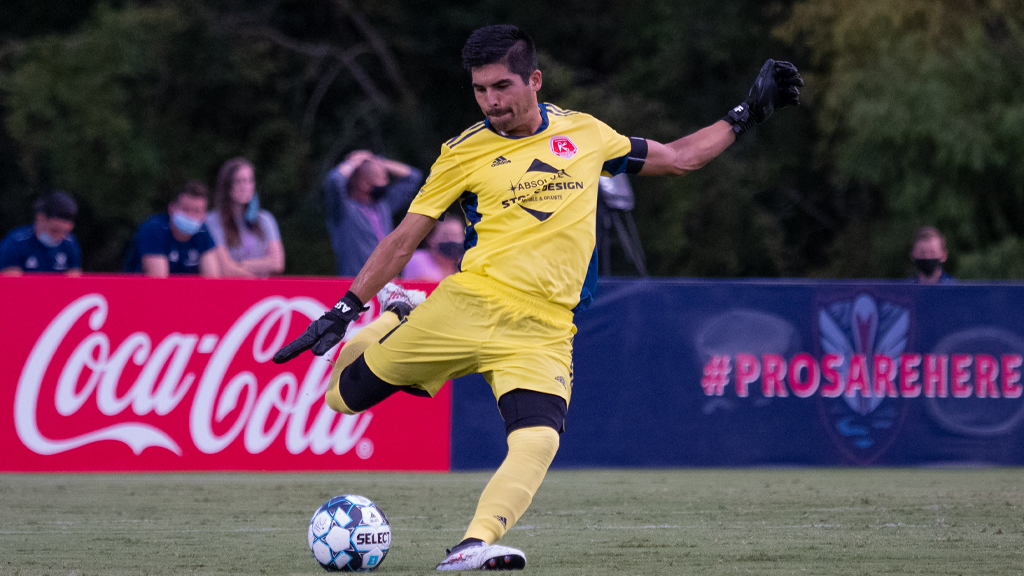 STATESBORO, Ga. — (Tuesday, July 28, 2020) — The Richmond Kickers (0-1-1) earned their first point and clean sheet of the 2020 USL League One season after battling South Georgia Tormenta FC (0-0-2) to a scoreless draw Tuesday night at Erk Russell Park. Akira Fitzgerald came away with eight saves to pick up the shutout on the road.
Kick off had to be delayed due to lightning in the area of the stadium by approximately 45 minutes.
Nine minutes into the match, Richmond had an early look at goal from a free kick. Daniel Jackson was whistled for a foul on Jonathan Bolanos outside of the Tormenta box. Ryley Kraft stepped up for the free kick, putting his shot just wide of the near post.
Matt Bolduc looked to continue his form from Saturday night’s match in the 12th minute. On the break, Bolduc played the ball through for Bolanos making a run towards goal. Pablo Jara came way off his line to beat the Kickers midfielder to the ball.
Akira Fitzgerald got fingertips to the ball just before halftime. Luca Mayr-Falten changed up the field to find Marco Micaletto on the left flank. He cut inside towards the center of the pitch and let a shot go from outside the box. Fitzgerald dove to his right and got the slightest of touches to push the ball wide for a corner kick.
Three minutes into the second half another free kick chance nearly came away with a go-ahead goal. Ian Antley found space for a run towards the Tormenta goal as Jad Arslan slid in for the foul. Kraft came over for the free kick again. This time he floated it over the top trying to pick out Emiliano Terzaghi.
The Kickers were denied an opportunity in the 59th minute. Kraft went for a short pass ahead for Bolanos. He whipped in a cross that went through a group of players to fall for Mutaya Mwape on the right wing. The Zambian put a shot on target that took a deflection across goal. Kraft got to the loose ball and his shot was stopped by the Tormenta keeper.
Tormenta found a chance in the 72nd minute. Ricardo Gomez picked up control of the ball after an errant pass. He played the ball ahead to Lucas Coutinho, who took a touch over to Pablo Botello Faz. He continued moving the ball to the right, finding Mikie Rowe in space. Trying for a shot, Fitzgerald came up with the save.
Seven minutes later Fitzgerald continued to fight for the clean sheet. Micaletto on the left flank tried to find the space for a cross. He elected to go short to Coutinho, who decided to drive inside the Richmond box. With the Richmond defense shutting down the options, Coutinho cut the ball back for Micaletto at the top of the box. His shot forced Fitzgerald to stretch for the save, pushing it away from the net.
With four minutes left in the 90, Emiliano Terzaghi pressed for the goal. Ryley Kraft lofted a ball over the top for Bolanos making a run up the left flank. Before reaching the endline, Bolanos managed to get a cross off to pick out Terzaghi. His header was somehow saved by Pablo Jara to deny the Argentine striker his second goal in as many matches.
With the clean sheet, Richmond has earned their first point of the season as they head into Saturday night’s Home Opener, presented by Woodfin as they take on Fort Lauderdale CF. Single match tickets go on sale at 10:00 a.m. Wednesday, July 29 at RichmondKickers.com/tickets.
Stay up to date with the latest news from the Kickers at RichmondKickers.com and on the official team app.