Preview: Kickers on the Road Tuesday at Tormenta

Match to be Shown Live on WTVR CBS 6.3 and on ESPN+ 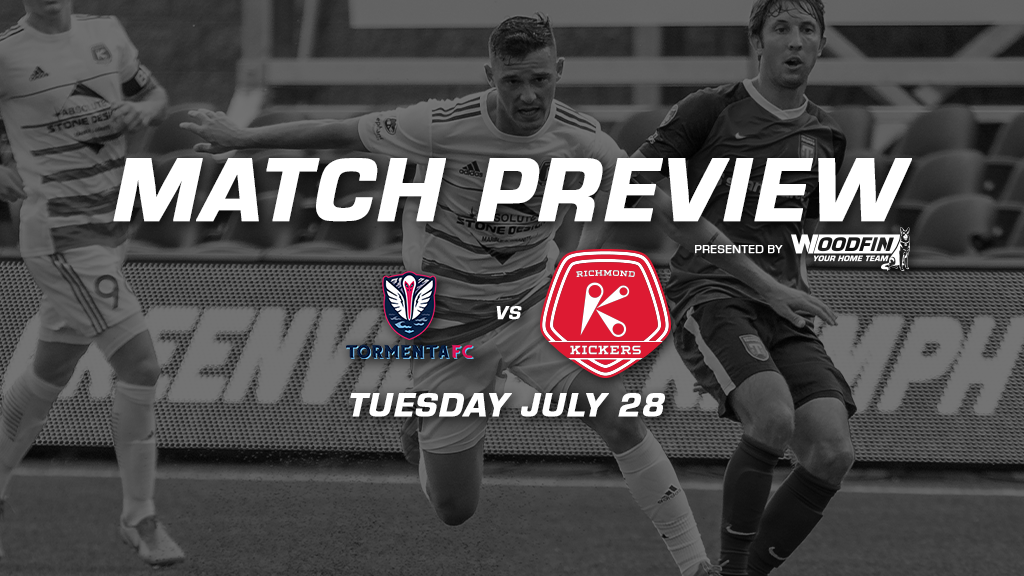 RICHMOND, Va. – (Monday, July 27, 2020) – The Richmond Kickers (0-1-0) turn around quickly after Saturday’s road defeat to Greenville to face South Georgia Tormenta FC (0-0-1) this Tuesday night. Kick off for this match is scheduled for 7:00 p.m. and will be available live on WTVR CBS 6.3 (Comcast 206, Verizon FiOS 466) and streaming on ESPN+.
Tuesday’s match will be the fourth all-time meeting between the two clubs, with both sides level at a 1-1-1 record. The first meeting came just two weeks into the start of the 2019 USL League One season, with both teams battling to a scoreless draw at City Stadium on April 6. Richmond made their first trek to Erk Russell Park on June 22, which saw the Kickers fall on the road to Tormenta behind an 84th minute penalty. The Kickers would redeem themselves in their next trip to Statesboro on August 31, putting up a decisive 4-1 victory with a pair of braces from Dennis Chin and Joe Gallardo cancelling out an early free kick goal by Mikie Rowe.
The Kickers will be looking to bounce back quickly after falling to Greenville Triumph SC Saturday night, 2-3. Richmond showed promise in the attack, with Matt Bolduc pulling Richmond level in the 35th minute after a well placed ball up the right wing from Wahab Ackwei gave Bolduc the space he needed. After coming on to make his professional debut in the second half, Jonathan Bolanos whipped in a cross to find the head of Emiliano Terzaghi for Richmond’s second goal of the night. A pair of own goals coupled with a Jake Keegan goal would be too much for the Kickers to overcome.
Tormenta FC salvaged a point in their home opener against Chattanooga Red Wolves SC Saturday night at Erk Russell Park. Marco Micalletto put the home side up after just seven minutes for a lead they would take into halftime. Chattanooga’s Greg Hurst found the back of the net twice in nine minutes to put the Red Wolves ahead. Former Kickers forward Daniel Jackson, who was converted to right back for this match, scored in the first minute of stoppage time to earn the side a point at home.
The 2020 Richmond Kickers Home Opener, presented by Woodfin, is set for Saturday, August 1 at 6:00 p.m. as league newcomers Fort Lauderdale CF make their first-ever trip to City Stadium.
Stay up to date with the latest news from the Kickers at RichmondKickers.com and on the official team app.

Richmond: Making his professional debut Saturday night at Greenville, midfielder Jonathan Bolanos (#17) made an immediate impact assisting on the second Richmond goal by Emiliano Terzaghi. The product of High Point University made 74 appearances for the Panthers scoring 15 goals and adding 10 assists over his four years in college. Midfielder Matt Bolduc (#7) opened up his 2020 account, scoring in the 35th minute. He is building off last season, which saw him finishing the season with six assists, tying him for fourth overall in USL League One. Defender Wahab Ackwei (#18) set up Bolduc’s goal against the Triumph, dropping a well placed ball over the top right into the path for the midfielder to run onto. Ackwei is in his second season with Richmond after 25 appearances and a pair of assists for the Kickers in 2019.
South Georgia: After playing last season with the Kickers, forward Daniel Jackson (#11) made the off season move to Tormenta, scoring in his debut with the club. The Pittsburgh native scored four goals and added an assist in 22 matches for the Kickers last season. Midfielder Abuchi Obinwa (#12) brings a wealth of experience to Tormenta this season. He was signed to Hannover 96 in the German Bundesliga before he made the move to the Columbus Crew in 2017. The Columbus native made seven appearances for the Pittsburgh Riverhounds on loan before heading back to Europe for a stint in Portugal with Lusitano FC. Returning to the pitch after a severe injury sidelined him for a large part of the 2019 season, midfielder Lucas Coutinho (#22) started the match Saturday against Chattanooga, playing 56 minutes. The Brazilian made 16 appearances for South Georgia in 2019, scoring three goals and adding two assists.