Recap: Bolduc, Terzaghi Score as Kickers Fall on the Road 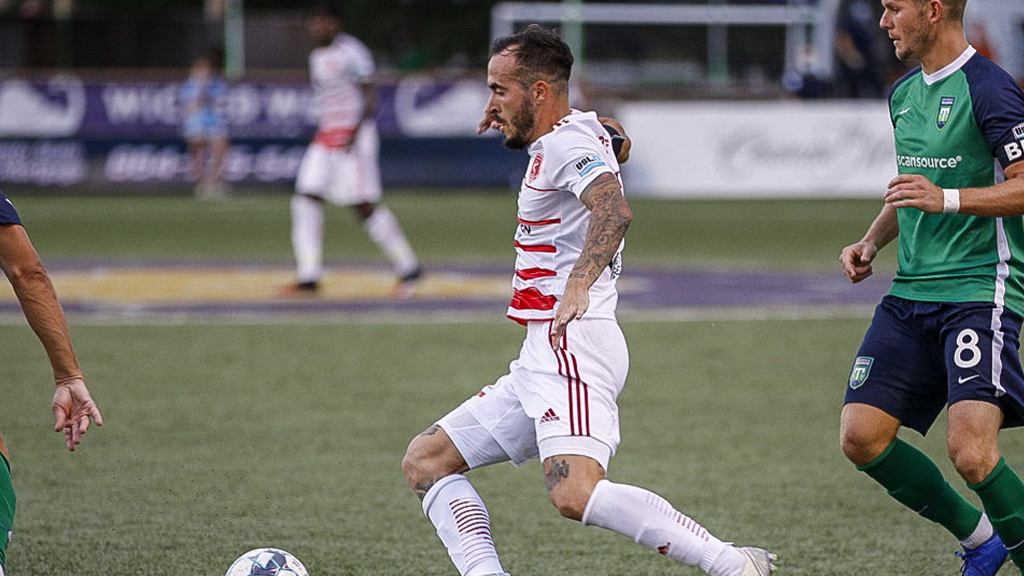 GREENVILLE, S.C. — (Saturday, July 25, 2020) — The Richmond Kickers (0-1-0) open the 2020 USL League One season falling on the road to Greenville Triumph SC (2-0-0) Saturday night at Legacy Early College. Matt Bolduc and Emiliano Terzaghi netted their first goals of the 2020 campaign, as a pair of own goals and a Jake Keegan goal downed the Kickers.
Two minutes into the match, Bolduc created the first chance for Richmond. Ryley Kraft forced a misplayed pass across the Triumph backline. Bolduc pounced on the loose ball and went for the quick shot, skidding just wide of the Greenville goal.
Greenville nearly jumped out ahead in the eighth minute. Omar Mohamed sent the ball through for Carlos Gomez. He cut across the top of the box to get his shot off, narrowly missing Akira Fitzgerald’s net.
Bolduc continued to fight for the opener in the 20th minute. After winning the ball in the corner, he looked for space to deliver a cross into the box, finding Terzaghi at the near post. His header drifted across the face of goal and wide for a goal kick.
The Triumph broke the deadlock only two minutes later. Omar Mohamed once again found Carlos Gomez. This time he took a quick touch to chip it forward for Jake Keegan. Several Kickers defenders tried to shut down the shot as Scott Thomsen unfortunately directed his clearance into the Kickers net.
Richmond leveled the score in the 36th minute from Matt Bolduc, who had been threatening all night. Wahab Ackwei from deep in the Richmond end of the field sent the long ball forward up the right flank to find Bolduc in acres of space on the run. The veteran midfielder slid his shot past Dallas Jaye and into the back of the net.
Right out of halftime, Greenville jumped ahead after another own goal. Matt Broomall came into the match at the break after Akira Fitzgerald was forced off due to an injury. Noah Pilato from the center circle tried to catch Omar Mohamed on a run towards goal. Broomall came off his line and collided with Wahab Ackwei. Mohamed tried to get a shot off as Ian Antley had a touch and it rolled into the Richmond goal.
Matt Broomall was tested from distance in the 61st minute. The Triumph were looking to find the right spot for a shot. Omar Mohamed kept the ball moving to the left for Noah Pilato. He looked to try his luck and let a shot go from about 20 yards out, with the ball ending up in the hands of Broomall.
Jake Keegan extended the Greenville lead in the 69th minute. Tyler Polak won the ball in the Triumph end and quickly passed it to Gomez. He returned the ball to Polak making a run up the right. He sent a cross into the box. Just out of the reach of Ivan Magalhães, Keegan was there to take a touch around Broomall and for the goal.
Emiliano Terzaghi opened up his Kickers account in the 74th minute. Jonathan Bolanos came into the match in the second half to make his professional debut winning the ball on the left side. He was able to get a cross into the box. The ball found Terzaghi for a header up and over Dallas Jaye for Richmond’s second goal of the night. This marked Bolanos’ first professional assist.
Greenville was reduced to 10 men in the 77th minute. Brandon Fricke brought Mumbi Kwesele down from behind at the top of the Triumph box. The referee went straight to the back pocket to issue the straight red card.
A pair of blocks deep into stoppage time denied the Triumph. JJ Donnelly picked up control of the ball outside of the Richmond box. He squared a pass for Aaron Walker, as he launched a shot that Broomall was able to block. Donnelly pounced on the loose ball and tried a shot of his own as Wahab Ackwei slid in to block the attempt out for a corner kick.
The 2020 Richmond Kickers Home Opener, presented by Woodfin, is set for Saturday, August 1 at 6:30 p.m. as league newcomers Fort Lauderdale CF make their first-ever trip to City Stadium.
Stay up to date with the latest news from the Kickers at RichmondKickers.com and on the official team app.