First New Signing for the 2020 USL League One Season 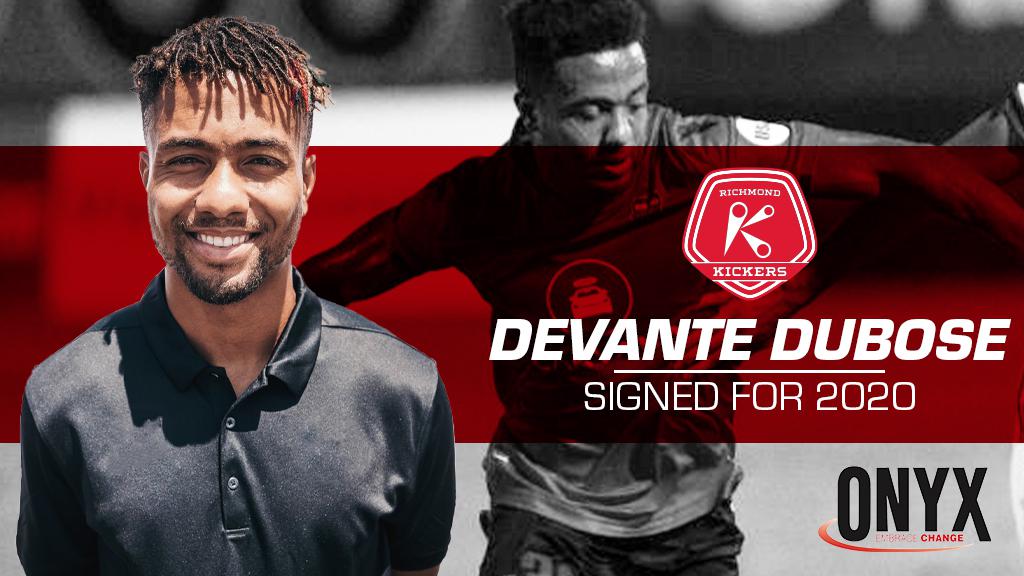 RICHMOND, Va. – (Friday, December 6, 2019) – The Richmond Kickers are pleased to announce the signing of defender Devante Dubose, pending USL League One and USSF approval. Dubose marks the first new signing for the 2020 season, along with being the first signing under new Sporting Director and Head Coach Darren Sawatzky.

"Devante represents a very athletic, experienced, and ultra competitive player for our team,” commented Sawatzky. “He has the ability to get into the attack and he defends very well from the outside back position.  We look forward to getting him in to Richmond and getting started with preseason."

A native of Oakland, Ca., Dubose played four years at Virginia Tech making 60 appearances for the Hokies. The right back was selected 66th overall in the 2014 MLS SuperDraft by the San Jose Earthquakes. He went on to join then-USL League Two side FC Tucson, where he made 11 appearances and scored one goal. The next season Dubose went on to sign with USL Championship side Oklahoma City Energy FC after a successful campaign with the club’s U-23 team. Dubose joined Phoenix Rising FC, where he played in 15 matches and notched one goal en route to the USL Championship Western Conference title. Most recently, he played for Oakland Roots in NISA.

“It feels good to be going back to Virginia, it is my second home,” said Dubose. “It’s where I went to college, where I met the love of my life. I have family here, and I’ve made a lot of memories throughout my life here, so I have nothing but love for Virginia. I am thankful to the City of Richmond and the Kickers community for welcoming me into their family with open arms. It’s an honor to play for a historic club that embraces the community and prides itself on work ethic, so it was a perfect fit for me. I can’t wait to give the Kickers community, the City of Richmond, and my teammates all I got because love and hard work is all I have to give!”

Don’t miss a moment of the 2020 USL League One season with your 2020 Season Membership, on sale now at RichmondKickers.com. Season Memberships are the ultimate way to support your Richmond Kickers and enjoy the thrill of every matchday at City Stadium. Memberships are a perfect fit for individuals, families, and businesses looking to take advantage of the best prices and exclusive perks we have to offer!

Check out what our new signing added to the @PHXRisingFC defense!#RVAisRed