Gates Open at 5:30PM for Oktoberfest and Fan Appreciation Night; Kickoff at 7PM 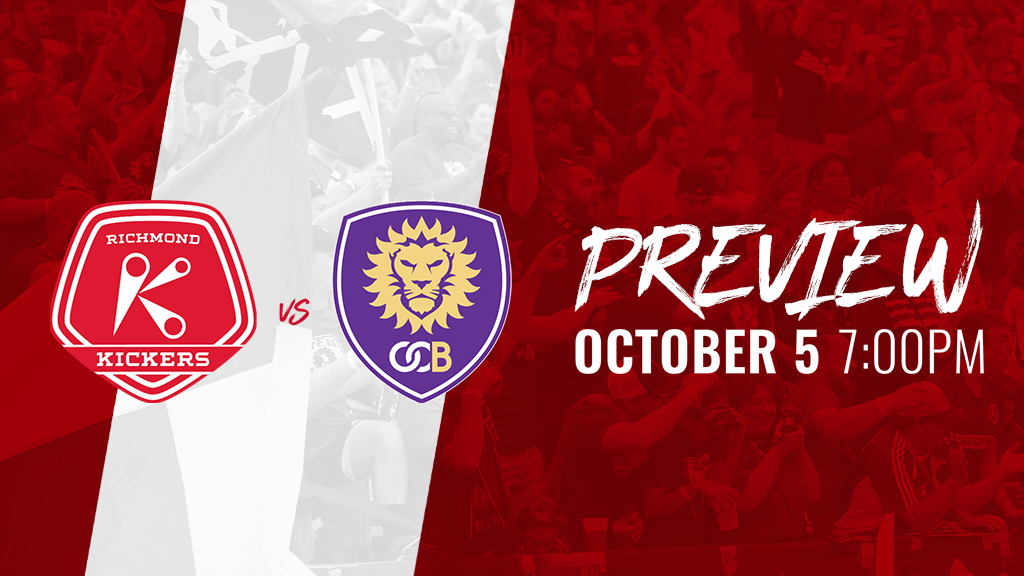 RICHMOND, Va. – (Friday, October 4, 2019) – The Richmond Kickers (8-14-5) will host their final match of the season against Orlando City B and Fan Appreciation Night this Saturday night at 7:00 p.m. Fans over the age of 21 can partake in the extended Happy Hour special from 5:30-7 p.m. and enjoy $3 off their craft beers and wine. After the match has concluded, fans under the age of 14 are invited to partake in a post-match shootout at the North End goal. Meanwhile, fans are also invited to a post-match meet and greet with the players from 9-9:30 p.m. Tickets are available now at RichmondKickers.com.
This will be the third time both of these clubs have met in the inaugural season of USL League One, with each team taking a victory at their home venue. A late penalty call decided the first match this season in Orlando back on May 22. OCB jumped out to a 2-0 lead behind goals from Moises Tablante and Serginho. Richmond leveled the score with goals from Eli Lockaby and Josh Hughes, both their first of the season. The referee awarded a penalty in the 84th minute, which was converted successfully by Thiago Souza to seal the victory. A goal in the 70th minute from Dennis Chin gave the Kickers a victory at City Stadium on July 20. The match got heated in the 83rd minute after Akira Fitzgerald, William Bagrou and Randy Mendoza were all shown straight red cards and sent off. The Kickers are holding onto a slight advantage in the overall series with OCB, taking a 3-2-1 record since the 2016 USL Championship season.
Richmond will be looking to close out the season on a high note after falling in a midweek clash to Toronto FC II Wednesday night at City Stadium. The Kickers jumped out to a lead early after Eli Lockaby found Mutaya Mwape in space for a run up the right wing. The crafty midfielder cut back and forth inside the Toronto box before firing a shot past Eric Klenofsky for the go ahead goal. The lead was short lived, with TFCII leveling the score only four minutes later from a goal by Jordan Perruzza. He would go on to get a brace in the 52nd minute to get the road win.
Orlando ended a 15-match winless streak last Saturday night, earning a 1-0 victory on the road at Greenville Triumph SC. William Bagrou silenced the crowd of over 4,000 fans at Legacy Early College in the 53rd minute, scoring the lone goal of the match that ended up being the game winner after an assist from Serginho, who leads the team in assists this season. OCB will be without Serginho for the season finale at Richmond after the midfielder was issued a straight red card for a serious foul in stoppage time.
Keep up with the Kickers during the off season at RichmondKickers.com. Follow the club on social media through the official Facebook, Twitter, Instagram and YouTube pages.

Richmond: Midfielder Ryley Kraft (#98) Richmond’s most recent signing to log minutes for the Kickers, Kraft has been one of the most accurate passers in the opponent’s half as the former USYNT player always look to play the ball to a more advanced area. He ranks in the top five in the team with 77 percent passing accuracy in the opponent’s half and he has seven chances created in just four starts. Defender Eli Lockaby (#17) played a vital distribution role on the right side of the pitch in the team’s most recent match against Toronto FC II. The rookie recorded 25/25 passes completed in the Toronto half including an assist of Mutaya Mwape’s goal, and he recorded a 98 percent pass completion overall during the match. Not only dangerous in distribution, Lockaby’s first league goal was scored at Orlando back in May. Forward Dennis Chin (#15) provided the go-ahead goal in the Kickers 1-0 win over OCB at City Stadium back in July. Chin ranks second on the team with five goals on the season and the veteran forward will look to add to his season tally against an OCB side that has conceded a league-leading 50 goals in 2019.
Orlando: Forward Thiago Souza (#11) will need to be well-guarded after the Brazilian forward proved capable of scoring on the Kickers in the clubs’ first match of the season when he delivered the game winner for the MLS Affiliate. Souza currently leads his team with six goals on the season -- ranking tied for 12th in the league. While OCB struggled to score goals in the 2019 campaign, Souza is the guy to do it for the Lions. Forward Moises Tablante (#24) scored the opening goal in the fourth minute in Orlando’s 3-2 win over the Kickers back in May. The attacker placed a low-driving shot to prove his ability to finish in the box. Midfielder Alasanne Ates Diouf (#21) is an attack-minded midfielder that will draw the attention of Richmond’s anchors in the center of the park. Diouf is one of his team’s shot leaders with 23 shots on the season. Diouf will look to distribute to his forwards, but Richmond will also need to be ready to close off shooting angles.