Kickers Defeated on the Road at North Texas 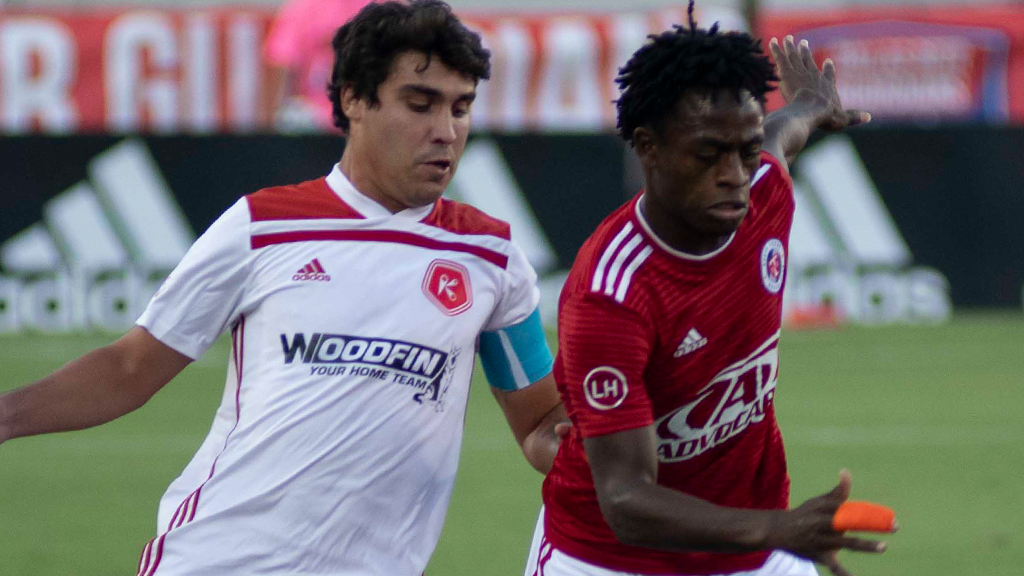 FRISCO, Texas — (Tuesday, September 10, 2019) — The Richmond Kickers (8-11-4) fell on the road to the league leaders North Texas SC (15-5-5) at Toyota Stadium Tuesday night. A hat trick from Ronaldo Damus and a fourth from Arturo Rodriguez was enough to give the home side all three points.
North Texas took the lead in just the first minute of the match from Ronaldo Damus. Richard Danso picked up control of the ball up the right wing. He whipped in a cross to find Damus making a run into the six yard box. He only needed to redirect the ball off a header and into the back of the net.
Scott Thomsen nearly had a chance to get Richmond back on the board in the 16th minute. Mutaya Mwape looked up to find Thomsen making a run up the left wing. His first touch was a cross in trying to pick out Daniel Jackson. Brecc Evans was able to get a touch on the ball to put it just out of reach of Jackson.
Akira Fitzgerald needed a massive save to keep Arturo Rodriguez from making it 2-0. Jacori Hayes was able to slip a pass through for Rodriguez, brining Fitzgerald off his line. He took a touch to his right trying to find space for a shot, but Fitzgerald tracked him well. Once he went for the shot, the Richmond keeper had enough of a touch to put it out for a corner kick.
Ronaldo Damus doubled the lead for North Texas on a brace in the 30th minute. Bicou Bissainthe won the ball in the midfield and quickly played the ball for Arturo Rodriguez. He played a through ball for Damus, who took a touch around Wahab Ackwei and put his shot across the face of goal into the far post for his second of the night.
Dennis Chin pounced on a loose ball and had his shot deflected just wide in the 43rd minute. Brecc Evans looked to play a ball back for Jimmy Maurer. Chin sensed it and was there to try for a quick shot as Maurer came off his line to cut off the angle, getting a touch on the ball to push it just wide.
A massive save came for Richmond in the 51st minute. Richard Danso played in a cross that took a deflection off Maxi Rodriguez. The ball rolled into space for Ronaldo Damus to get a shot off. Akira Fitzgerald had the quick reaction save to push the ball off the crossbar.
Mutaya Mwape forced a save out of Jimmy Maurer in the 58th minute. Ryley Kraft changed up the play to Charles Boateng on the right side. Boateng held up play as Mwape ran onto the ball and launched a shot that needed an acrobatic save from the North Texas keeper.
Richmond were hard done in a sequence that saw five shots in the 62nd minute, none of which would find the back of the net. Charles Boateng got a touch into space out of the reach of Maurer. Before it reached the endline, he turned and laid the ball off for Mutaya Mwape to go for a shot that was saved by Maurer. Dennis Chin was in place to try for a shot that saved off the line by Brecc Evans. The ball rolled out for Scott Thomsen, going for a shot that sailed wide.
North Texas would make it 3-0 in the 70th minute, this time from Arturo Rodriguez. Richard Danso sent in a cross for Ronaldo Damus. Not able to turn, Damus laid the ball off for Rodriguez, who went for the one time effort to find the back of the net.
A fourth goal came for the home side seven minutes later. Arturo Rodriguez ran down a long ball all the way to endline. He looked to play it back for Jorge Almaguer. He could not get a clean touch on the ball putting it out of his reach. Ronaldo Damus ran onto the ball and turned for the quick shot the slipped under Akira Fitzgerald and into the goal.
The Kickers are back at City Stadium next Saturday night to host Forward Madison FC and Heritage Night, presented by RVAmigos. The gates open at a special time of 4:30 p.m. with live music and Brazilian dancers. Dank Eats will be on hand with funky fresh pitas and gyros. The players will be wearing limited edition pregame jerseys that will be auctioned off to benefit the Black History Museum and Cultural Center of Virginia. Tickets are on sale now at RichmondKickers.com.