Watch Live from Toyota Stadium on ESPN+ at 8:00 PM ET 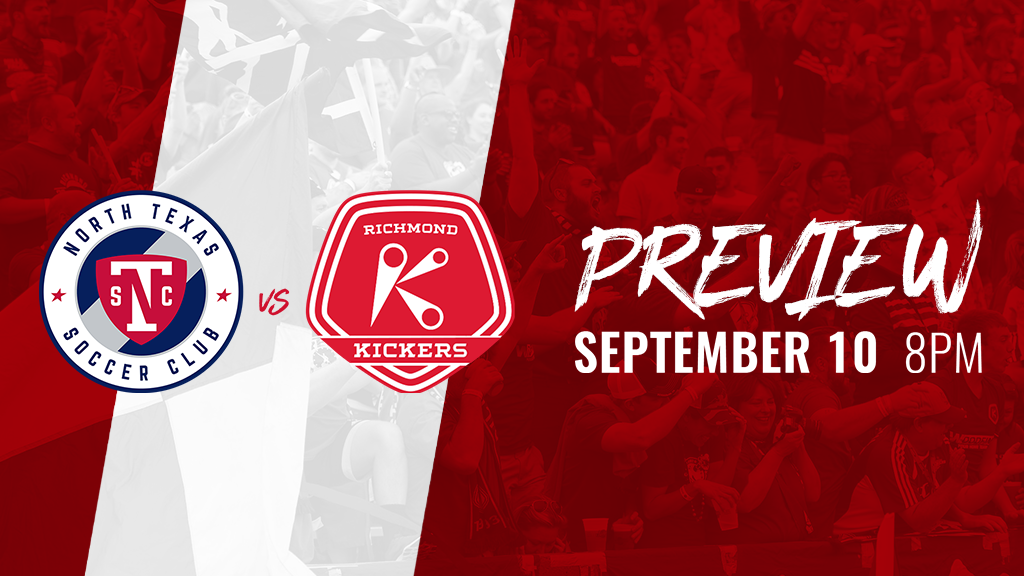 RICHMOND, Va. – (Monday, September 9, 2019) – The Richmond Kickers (8-10-4) make the trip to the league leaders North Texas SC (14-5-5) Tuesday night at Toyota Stadium. Kickoff is set for 8:00 p.m. ET and will be available live on ESPN+.
This match will be the third meeting between the two clubs this season, as North Texas has taken victory in the previous two meetings. North Texas traveled to City Stadium June 1, as the Kickers fell 0-3. The visitors took a 1-0 lead into halftime after a goal from Dante Sealy. Ricardo Pepi and David Rodriguez added to the score in the second half, both assisted by Sealy. The next match also came at City Stadium, this time a 2-0 win for North Texas. Thomas Roberts and Callum Montgomery scored within three minutes of each other to seal the second win in the series.
Richmond kept their playoff hopes alive Saturday night, taking a 1-0 win over Greenville Triumph SC. Just before halftime, Joe Gallardo served in a corner kick that found the head of Braeden Troyer. His shot hit off the crossbar and over the line for his first competitive goal. Akira Fitzgerald made five saves as he picked up his seventh shutout of the season, tying him for fourth overall in USL League One.
North Texas clinched the first spot in the USL League One Playoffs after a 3-1 road win at Orlando City B Friday night. John Nelson scored in the 22nd minute as North Texas held onto a 1-0 lead heading into halftime. OCB tied the match up in the 53rd minute through Brandon John. Ronaldo Damus responded just a minute later to restore the lead for North Texas. He found the back of the net again in the 70th minute, converting from the penalty spot.
The Kickers are back at City Stadium next Saturday night to host Forward Madison FC and Heritage Night, presented by RVAmigos. The gates open at a special time of 4:30 p.m. with live music and Brazilian dancers. Dank Eats will be on hand with funky fresh pitas and gyros. The players will be wearing limited edition pregame jerseys that will be auctioned off to benefit the Black History Museum and Cultural Center of Virginia. Tickets are on sale now at RichmondKickers.com.

Richmond: Goalkeeper Akira Fitzgerald (#1) recorded his seventh shutout of the 2019 USL League One season, tying him for fourth in the league. The veteran keeper has 57 saves this season, which ranks second in the league. Defender Eli Lockaby (#17) made two key passes and had two interceptions in the 1-0 victory over Greenville. The VCU product has a passing accuracy of 81.7 percent from 823 passes this season. Midfielder Josh Hughes (#7) had a massive goal line clearance to keep Greenville off the score sheet early in the match. He has two goals and two assists this season, including his first professional goal.
North Texas: Forward Ronaldo Damus (#11) score two goals in the 3-1 win at Orlando City B Friday night. He leads the league in goals this season with 13 goals, three ahead of Jordan Perruzza of Toronto FC II. Midfielder Arturo Rodriguez (#10) has eight assists this season, the best in the league and only two ahead of Matt Bolduc. He played 90 minutes and had a passing accuracy of 90 percent in the OCB match. Goalkeeper Carlos Avilez (#1) made three saves in the win over OCB to clinch a spot in the playoffs. The Dallas native has nine shutouts this season, putting him tied for second overall in the league and just two ahead of Akira Fitzgerald.