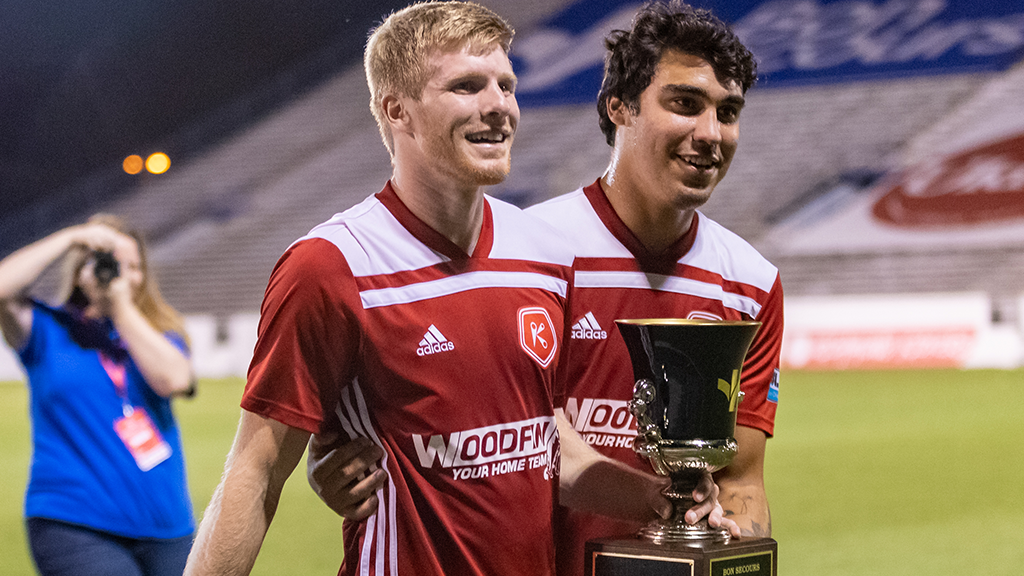 Josh Hughes came up with a massive goal line clearance in the 12th minute to keep the visitors off the board. Tyler Polak played a quick pass inside the Richmond box for Carlos Gomez. He was able to get enough of a touch on the ball to get it to JJ Donnelly, who could not get much on the shot as Hughes was there for the clearance.

Dennis Chin nearly found the break through goal in the 35th minute. Eli Lockaby picked up control of the ball on the right wing. He whipped in a ball for Chin making a near post run. The Jamaican tried for a shot as it skipped just wide of the post.

Braeden Troyer scored his first competitive goal for the Kickers in first half stoppage time. Off a corner kick from Joe Gallardo, Troyer rose above the crowd to get a head on the ball and ping it off the crossbar and over the line to put Richmond ahead 1-0 before halftime.

A chance came for second half substitute Mutaya Mwape in the 64th minute. Mwape switched up the play to get the ball over to Dennis Chin on the left wing. After some fancy footwork to create some space, Chin looked to play the ball back for Mwape making a run towards the far post. He was not able to get a clean touch on the ball, allowing Greenville to clear the ball away from danger.

Mwape could have made it 2-0 for the Kickers in the 88th minute. After playing a give and go with Eli Lockaby, Mwape cut in towards the center of the field. He looked to sneak in a shot towards the near post that Miguel Uribe needed to push wide.

The Kickers have a busy week ahead. First up, Richmond takes the trip to Toyota Stadium to face the first place North Texas SC Tuesday night for an 8:00 p.m. ET kickoff. The Kickers will be back at City Stadium next Saturday night to host Forward Madison FC and Heritage Night, presented by RVAmigos. The gates open at a special time of 4:30 p.m. with live music and Brazilian dancers. Dank Eats will be on hand with funky fresh pitas and gyros. The players will be wearing limited edition pregame jerseys that will be auctioned off to benefit the Black History Museum and Cultural Center of Virginia. Tickets are on sale now at RichmondKickers.com.