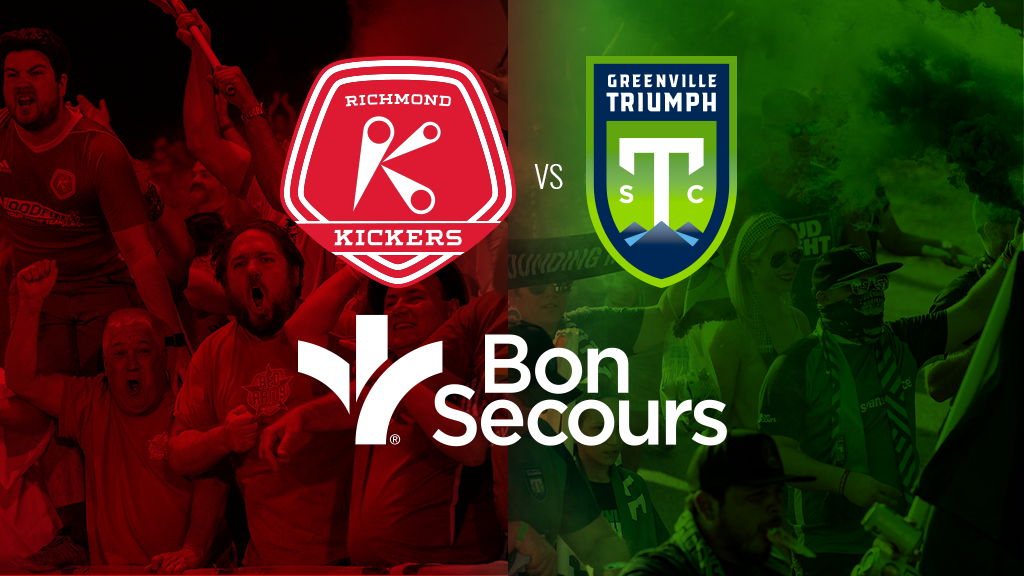 RICHMOND, Va. — (Thursday, August 29, 2019) — The Richmond Kickers and Greenville Triumph SC are pleased to announce the first annual Bon Secours Cup, a regional rivalry built in USL League One between these two southeastern clubs. Both clubs have proud partnerships with Bon Secours as the clubs' Official Healthcare Services Provider.

“This is a fun competition for each team’s players, staff and fans as we celebrate the budding rivalry with the two clubs that share a well being focus with Bon Secours as leaders in our respective communities,” said Matt Spear, Kickers President and General Manager. “And I know the Bon Secours folks in Richmond are pumped about going for bragging rights.”

The clubs have faced each other twice during this inaugural USL League One season; both in Greenville. The final match of the regular season is slated for September 7, in Richmond.

The Bon Secours Cup champs will be determined by the traditional soccer point system - three points for a win, one point for a draw, zero points for a loss. In the event the clubs end up tied on points, standard FIFA tie-breakers will be utilized to determine the cup winner.

“We are incredibly excited to launch a platform that will be executed in tandem with not only a fellow League One member club, but also a key partner for both clubs in each market,” said Chris Lewis, President of Greenville Triumph SC. “This competition will underscore each club’s partnership with Bon Secours and will provide a vehicle for heightened community engagement and fan interaction as it continues to develop.”

Both clubs are holding three points heading into the final meeting September 7. Richmond claimed the first meeting April 20 behind a 49th minute goal from Joe Gallardo. Greenville took the three points in the second meeting at Legacy Early College as Jake Keegan netted the game winner in the 42nd minute.

The final meeting between the two clubs will be Saturday, September 7 at City Stadium. Kickoff for that match is set for 7:00 p.m. and will be available to stream on ESPN+. The gates will open at 5:30 p.m. for Cider Fest, presented by Bon Secours. Tickets are on sale now at RichmondKickers.com.