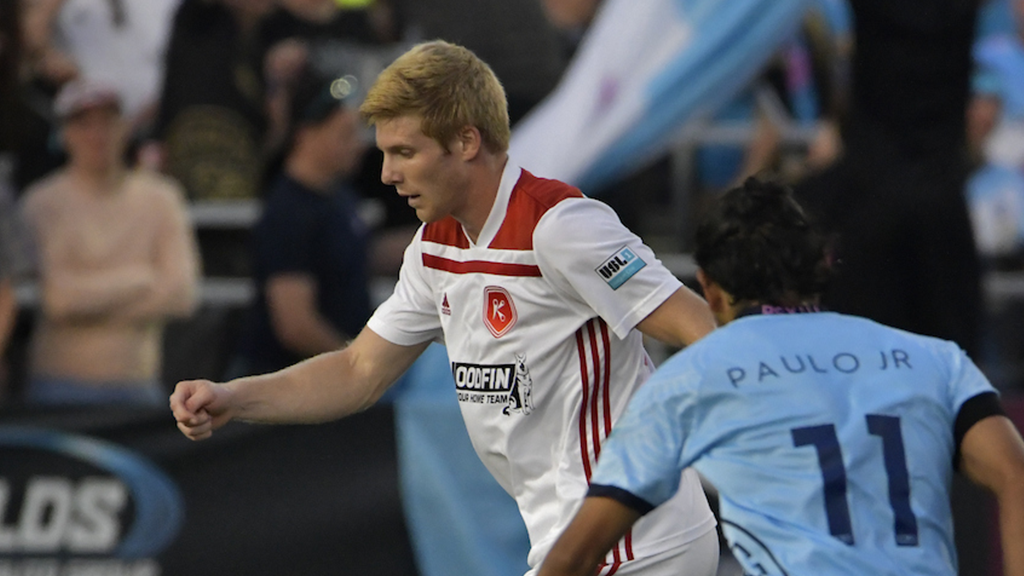 MADISON, Wis. — (Saturday, August 24, 2019) — The Richmond Kickers (6-10-4) had their unbeaten streak ended on the road, falling to Forward Madison FC (9-8-5) at Breese Stevens Field Saturday night. Christian Diaz scored in the 74th minute to give the home side the victory.

Three minutes into the match, Joe Gallardo looked to get Richmond on the board early. Picking up control of the ball just inside the Madison end of the field, Gallardo charged towards goal. After getting past two defenders, Gallardo cut across the top of the box and went for the shot, forcing a save out of the Madison keeper.

Conor Shanosky had an opportunity six minutes later. Scott Thomsen whipped in a corner kick towards the back post. Shanosky was left in space to leap and get a head on the ball, putting his shot just to the left of goal.

Madison had a chance come their way in the 13th minute, only to be denied by the offside flag. Josiel Nunez picked up control  from Don Smart. He went for the through ball for Paulo Jr. in behind the Richmond backline, putting his shot just wide as the flag was up for the offside call.

Mutaya Mwape found a chance for a shot in the 14th minute. Eli Lockaby won the ball and played a quick pass for Mwape inside the Madison box. The Zambian cut towards the top of the box and then back towards the endline. With space, he tried for goal, putting his shot across the face of goal.

Two minutes before halftime, Akira Fitzgerald needed to come up massive. Off a JC Banks corner, the ball bounced around the box. Before any Madison player could get to the ball, Fitzgerald smothered the ball to keep it level.

The offside flag denied Maxi Rodriguez just before the halftime whistle. Scott Thomsen sent in a long free kick into the Madison box. Connor Tobin rose to try and head the ball out of danger, instead putting it right to the feet of Josh Hughes. The Kickers midfielder tried for a shot, but he did not get a clean hit on the ball. Rodriguez was there to redirect the ball into the back of the net as the referee called the goal back for offside.

Madison forced a save from Akira Fitzgerald in the 53rd minute. JC Banks squared a pass across the face of goal to Josiel Nunez. He tried for the one time effort, putting his shot right to Fitzgerald.

Akira Fitzgerald needed to punch away an effort from Don Smart in the 73rd minute. Carter Manley sent in a cross for Paulo Jr. His shot was blocked as it deflected to Don Smart. His effort was punched away by Fitzgerlad.

Forward Madison took the lead just a minute later. Christian Diaz played the ball ahead for JC Banks. He slipped it through for Paulo Jr. as he took a quick pass to get it back for Diaz in front of goal. He just needed to redirect the ball into the back of the net.

Joe Gallardo nearly leveled the score in the 90th minute. A foul about 30 yards out set up a free kick chance for Richmond. With Jannik Eckenrode and Gallardo standing over the ball, Gallardo went for the near post shot as Brian Sylvestre was there to push it wide.

The Kickers continue their road trip next Saturday night, making their second trek to Erk Russell Field to face South Georgia Tormenta FC. Kickoff for that match is set for 8:00 p.m. and will be available live on WTVR CBS 6.3 and online on ESPN+. Keep up to date with everything going on with the Kickers at RichmondKickers.com.