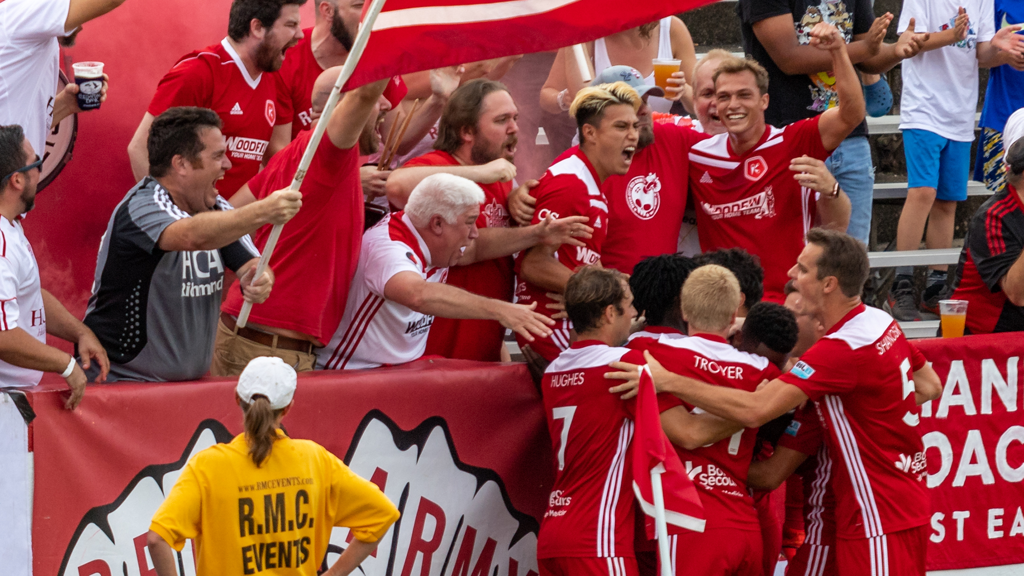 RICHMOND, Va. — (Saturday, August 17, 2019) — The Richmond Kickers (6-9-4) extend their unbeaten streak to four matches following a 2-2 draw with Toronto FC II (6-8-6) in front of over 4,000 at City Stadium Saturday night. Daniel Jackson found the back of the net twice in the first half to put Richmond up heading into the halftime break. Toronto pulled level in the second half behind goals from Jordan Perruzza and Terique Mohammed.

The Kickers got on the scoresheet after just five minutes through Daniel Jackson. Joe Gallardo waited for Maxi Rodriguez to get in place for a run inside the box. Beating Patrick Bunk-Andersen to slide in, Rodriguez gets enough on the ball to pop it up high. The ball came down at the back post, where Josh Hughes could get a head on the ball to bring it down for Matt Bolduc at the top of the box. Going for the shot, the ball took a slight deflection to fall to the feet of Jackson, who just need to redirect the ball in for his second goal in two matches.

Toronto found a chance in the 13th minute only to be denied by Akira Fitzgerald. Griffin Dorsey made a run up the left wing. Able to keep control of the ball, he went for the near post shot only to have Fitzgerald there for the stop.

Daniel Jackson doubled the Richmond lead in the 23rd minute. Joe Gallardo picked the pocket of Themi Antonoglou, and quickly turned to slot the pass through for Jackson. Rocco Romeo slid in trying to make the tackle, as Jackson came away with the ball and open space in front of him. Caleb Patterson-Sewell came off his line to cut down the angle. Jackson only needed to calmly put it to the right of the keeper and into the back of the net for his second of the night.

Toronto pulled a goal back in the 53rd minute from a free kick. Conor Shanosky stepped in the way of Jordan Perruzza as the referee whistled for the foul just outside of the Richmond box. Perruzza stepped up to take the free kick and managed to get the shot under the wall and out of the reach of the Kickers keeper.

Back to back saves from Akira Fitzgerald kept Toronto from a second goal just a minute later. Jacob Shaffelburg whipped in a cross that got through a pack and found Noble Okello. Fitzgerald made the stop on the attempt from Okello. The ball bounced out for Jordan Perruzza to get a head on it as Fitzgerald came up with the point blank save.

Toronto leveled the score in the 87th minute from another set piece. Matthew Srbely stood over a free kick on the left side. He floated the ball in towards the far post right as Terique Mohammed broke through the Kickers defense to head home the game tying goal.

The Kickers head back to face Forward Madison FC next Saturday night at Breese Stevens Field. That kickoff is set for 8:00 p.m. and will be available on WTVR CBS 6.3 (Comcast 206, Verizon FiOS 466) and streaming online on ESPN+. Stay up to date on all of the Kickers news at RichmondKickers.com.