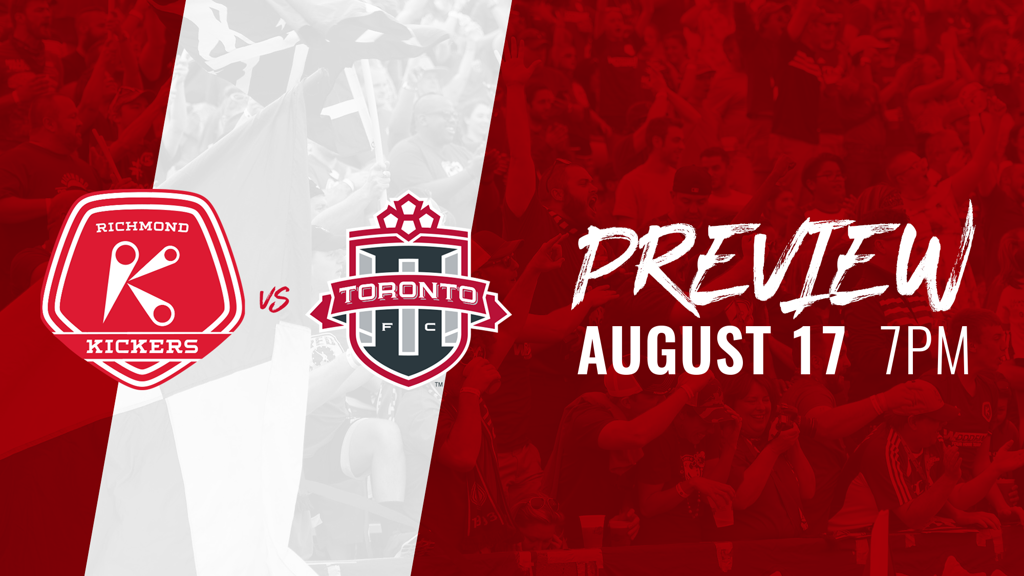 RICHMOND, Va. – (Friday, August 16, 2019) – The Richmond Kickers (6-9-3) will be looking to extend their winning streak to four matches Saturday night as they host Toronto FC II (6-8-5) and Family Fest, presented by WTVR CBS 6. Gates open at 5:30 p.m. with half off craft beers until 6:00 p.m. and live music from the Cary Street Ramblers. Fans can also enter to win two used cars from CBS 6 and Star Auto Sales. Earn an extra entry into the drawing when you donate new clothing items in support of Communities in Schools Richmond. The Kickers have partnered with Richardsons Rescue to take donations to honor former Kickers photographer, Suz Kitsteiner. Tickets are on sale now at RichmondKickers.com.
The Kickers will be facing a familiar opponent Saturday night, meeting Toronto FC II for the 11th time since TFCII’s inception in 2015. Richmond holds the advantage in the series, with a 6-3-1 record. Saturday’s matchup will be the second of the three meetings between the two clubs. Richmond claimed victory on July 26 behind a 2-1 scoreline. Matthew Srbley put the homeside up 1-0 in the 19th minute. The Kickers responded in the 35th minute when the Toronto keeper could not control a free kick from Scott Thomsen, putting it into his own net to level the score. Three minute into stoppage time, Josh Hughes scored his second goal of the season, putting away a deflected penalty save after Joe Gallardo was denied from the spot. The two clubs will meet one more time this season October 2, again at City Stadium.
Continuing their run of form, the Kickers claimed their third straight victory last Saturday night on the road against Forward Madison FC, 1-0. Going into halftime all level, Richmond started making moves in the second half to try and find the go ahead goal, one of which was bringing on Daniel Jackson in place of Dennis Chin in the 66th minute. Three minutes later, a deflected Josh Hughes pass fell to the feet of Jackson in behind the Madison backline. Having his initial shot saved, Jackson pounced on the loose ball and made no mistake to find the back of the net and put Richmond ahead on the road. That goal was enough for the Kickers to take all three points and earned the shutout, not allowing a single shot on target for the home side.
Winless in their last four matches, Toronto come into Saturday’s match on the heels of their third straight defeat, this time at the hands of Greenville Triumph SC, 1-3. Greenville dominated the match in the first half, scoring all three of their goals before the break. Toronto made a couple of changes at halftime, bringing Ayo Akinola and Matthew Srbely on in place of Mehdi Essoussi and Jordan Faria respectively. The duo would connect in the 64th minute when Srbely played the long through ball for Akinola to get in behind the Greenville back line and only need to slide it past Dallas Jaye to pull one back for the home side.
The Kickers turn around and head back to face Forward Madison FC next Saturday night at Breese Stevens Field. That kickoff is set for 8:00 p.m. and will be available on WTVR CBS 6.3 (Comcast 206, Verizon FiOS 466) and streaming online on ESPN+. Stay up to date on all of the Kickers news at RichmondKickers.com.

Richmond: Midfielder Josh Hughes (#7) picked up USL League One Team of the Week honors after the Kickers victory at Madison, helping the team by recording four tackles and three interceptions that would contribute to the seventh shutout of the season. The midfielder has scored on two occasions and have assisted on one other after making 15 appearances with the club. Defender Ivan Magalhães (#4) made his first appearance in the Team of the Week after a solid defensive performance. The Brazilian defender made a team leading 51 passes, completing 74.5 percent of those. Of those 51 passes, 27 of them were on the Madison end of the field. Forward Daniel Jackson (#9) made an immediate impact off the bench against Madison, scoring on his first touch just three minutes after taking the field. Jackson has two goals and an assist in 15 matches for the Kickers.
Toronto: Forward Jordan Perruzza (#77) has scored eight times this season, leading Toronto. Those eight goals are tied for third-most in USL League One with Chattanooga’s Steven Beattie. In Toronto’s first matchup against Richmond on July 26, Perruzza subbed into the game in the 85’. Midfielder Adolfo Ovalle (#43) has started all but one game for Toronto. His numbers on offense won’t turn many heads, but he’s been one of the most consistent ball distributors on the team. Ovalle has completed over 800 passes, good for second most behind Patrick Bunk-Anderson. His 93.3% passing accuracy in his own half is one of the highest success rates on Toronto FC II. On July 26 against Richmond, Ovalle completed 94% of his passes and created one chance for Toronto. Midfielder Matthew Srbely (#50) scored the lone goal for Toronto in the first game between Toronto and the Kickers. Srbely has the second-most shots on the team with 25. Of those 25, four have found the back of the net. He has notched 20 key passes this season, leading to many  chances for Toronto on the offensive side of the field.