Gates Open at 5:30PM for Honoring Our Heroes Night; Kickoff at 7PM 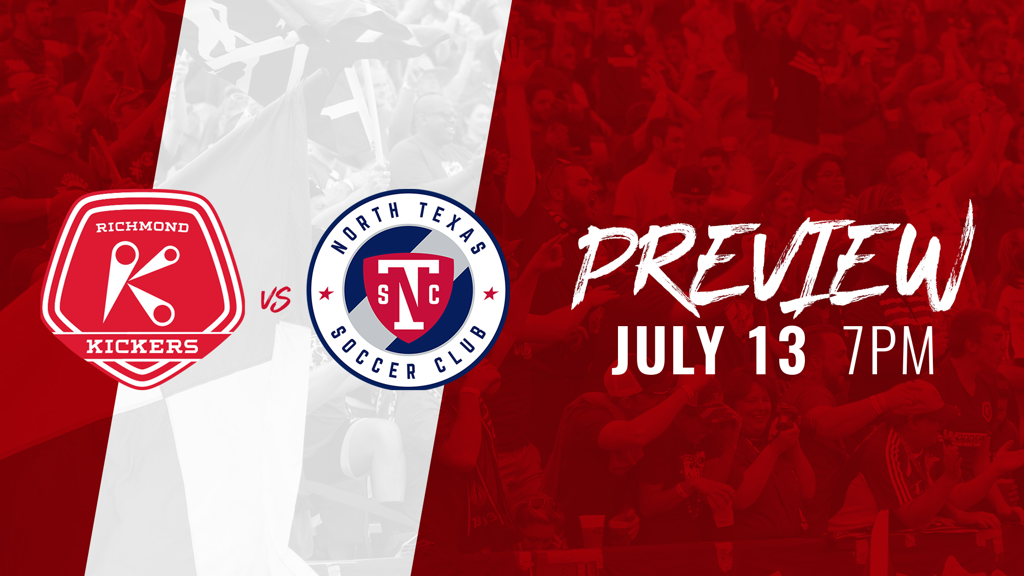 In conjunction with hosting North Texas, the Richmond Kickers will be Honoring Our Heroes with the Virginia War Memorial Foundation. All military, police, fire and other first responders with ID can purchase tickets for just $12 at the gate.

The Kickers will pay tribute to Charlie Slagle this Saturday with a moment of silence before kickoff. The players jerseys will feature a patch to honor Charlie that will remain on the shirts for the rest of the season. Join the Red Army during the 67th minute as they will do a chant for Charlie.

This will be just the second match between the two clubs this season. North Texas leads the season series after earning a 3-0 win, June 1, at City Stadium. The scoreline did not necessarily reflect the on-field play for Richmond who dominated possession and created chances in the attacking areas during both halves.

After a disappointing scoreless drought during the month of June, the Kickers are looking to finish their chances in the final third of the field while building on the stronger defensive performances the team strung together since the match against North Texas. The Reds have owned possession in their most recent matches on the road while earning one clean sheet and nearly earning two more at South Georgia Tormenta FC and Chattanooga Red Wolves SC.

The Kickers found their scoring form over the holiday off week during a friendly at USL League Two side Lionsbridge FC. The squad is looking to that 5-0 win on the peninsula -- including goals from prominently featured players like Joe Gallardo, Jannick Eckenrode and Charles Boateng -- as a building block for the rematch against the USL League One leaders.

In the case of the league leaders, North Texas experienced its first dip in form and was held scoreless for the first time this season on Sunday after a 0-0 draw at home against Greenville -- the first time this season that North Texas had dropped points at Toyota Stadium. Of course, the team is also without the services of Ricardo Pepi who recently signed a contract with North Texas’ parent club, FC Dallas. Pepi scored in the match against the Kickers, and his absence will allow the Richmond defense to key-in more aggressively on the rest of the North Texas attackers.

The Kickers will wrap up their two-game homestand on Saturday, July 20 when they square off against Orlando City B at 7:00 p.m. at City Stadium. Tickets are available now at RichmondKickers.com.

Richmond: Defensively, Richmond can compete with the best teams in the league. But it’s their lack of scoring in the last month and a half that has stalled the team’s momentum. Forward Joe Gallardo (#10) continues to be a weapon on offense. Gallardo is one of two players for the Kickers that have registered double-digits in shots with 25, good for third-most in USL League One. Defender Eli Lockaby (#17) has been one of the more consistent players in the backfield for Richmond. Following his USL League One Team of the Week nomination after his performance at Tormenta FC, Lockaby posted solid numbers in the road loss to Chattanooga two weeks ago. With 16 clearances and 21 interceptions highlighting his season numbers, Lockaby continues to play quality defense in front of Akira Fitzgerald (#1). Speaking of Fitzgerald, the Richmond goalkeeper is a star among the ranks of the other USL League One goalies. His 37 saves ranks third-highest in the league and the five clean sheets he’s posted ranks fourth in League One play.

North Texas: North Texas SC leads USL League One in shots and goals and forward Ronaldo Damus (#11) has played a large part in their success. The 19-year-old is the league leader in goals with 9 and has 27 shots (16 on goal) on the season, leading the team in both categories. Midfielder Arturo Rodriguez (#10) is the only player on the team to have started and played in all 14 games. He is third on the team in shots and has three goals this season. But what’s most impressive is his ability to move the ball around in the offensive zone. He leads the league in chances created with 30. He has been an important piece to the teams puzzle on offense as they’ve rattled off a league-leading 28 goals and 205 shots this season. Captain Brecc Evans (#4) leads North Texas SC on the defensive side of the ball. After playing just one year of college soccer at Cal Poly, where he was named to the Big West All-Freshman team, Evans signed a two-year contract with North Texas in January. Although his professional career is just a few months old, Evans has shown he can compete at the next level. He leads the team in clearances (29) and is second on the team in interceptions with 12.