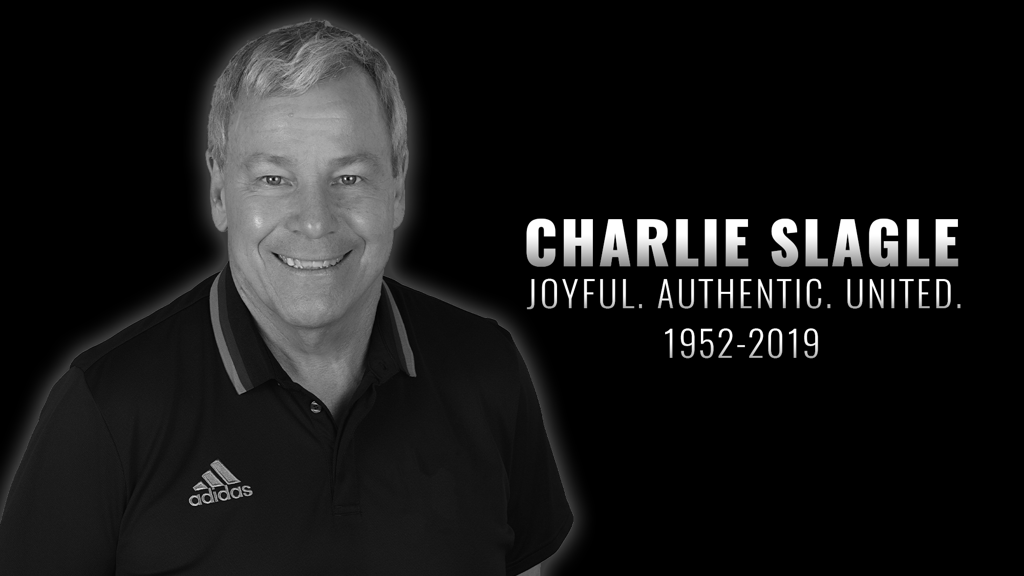 RICHMOND, Va. – (Tuesday, July 2, 2019) – The Richmond Kickers are saddened to pass along the news that Vice President of Community Engagement and Gameday Experience, Charlie Slagle has passed away at the age of 67. The club extends their heartfelt thoughts to the family and friends of Charlie.

“We are saddened by coach Slagle’s sudden passing,” said Rob Ukrop, Richmond Kickers Pro Chairman. “He was a terrific man who loved his children, Barry and Amelia, his Grandaughter Clara, and the soccer community at large. He made an immediate impact on the RVA community by sharing his time and talent running coaching clinics and camps. Most importantly, he was an incredible friend to our staff and a joyful and authentic leader.  We will miss Coach and strive to continue his powerful legacy of serving others.”

Since joining the Kickers in January, Slagle has made an immediate impact on the Richmond soccer community. He hosted many soccer clinics all throughout the Richmond metro area, including YMCAs  and schools. Slagle also hosted U.S. Soccer Grassroots and D License courses, including this past Saturday at City Stadium. He had volunteered in several local schools and coordinated our game day volunteers, ball kids, starting lineup buddies and national anthem singers. One of many local groups Slagle championed was First Touch Sports, plus was a ringleader to ignite the upcoming September 14th First Responders Community Cup. Slagle threw the first pitch at last Friday’s Flying Squirrels’ baseball game. Slagle also made several radio and TV appearances while with the Kickers, including on WTVR CBS 6.

“We are stunned for the loss of a tremendous friend and person,” added Richmond Kickers Pro President and General Manager, Matt Spear. “Charlie was a force of nature who lived our “Joyful, Authentic, United” mission to the fullest. What was so powerful about Charlie is that he never met a stranger - he loved people and his energy was infectious. He made a massive community impact the past six months here in Richmond. Charlie deeply believed and activated that soccer was an inspiration and unifier. Charlie was a pivotal reason that I chose to attend Davidson, that I served our alma mater, and that I focus on servant leadership.”

Slagle served as the Tampa Bay United Soccer Club CEO starting in March 2016. He was previously the Executive Director of the Colorado Rapids Youth Soccer Club in Denver, Co. Prior to that, Slagle was the CEO of the Capital Area Soccer League (CASL) in Raleigh, N.C. for more than 12 years.

A former Head Coach of the Davidson Wildcats for 21 years, Slagle coached the team from 1980-2000, with players who are the principals in our 22 Holdings ownership group and Team President Matt Spear. He led the team to a Final Four finish in 1992, and was named the NCAA Division I Coach of the Year that same year. He was also named the Southern Conference Coach of the Year seven times and the United Soccer Coaches Regional Coach of the Year on two occasions. In his roles at Davidson and CASL, he hosted 14 NCAA Division I College Cups and hosted the last training camp for the for the US Men’s National Team prior to the 2002 and 2006 FIFA World Cups.

The club will share more information about a memorial service when those details are available.