Watch Live from David Stanton Field at 7PM on WTVR CBS 6.3 and ESPN+ 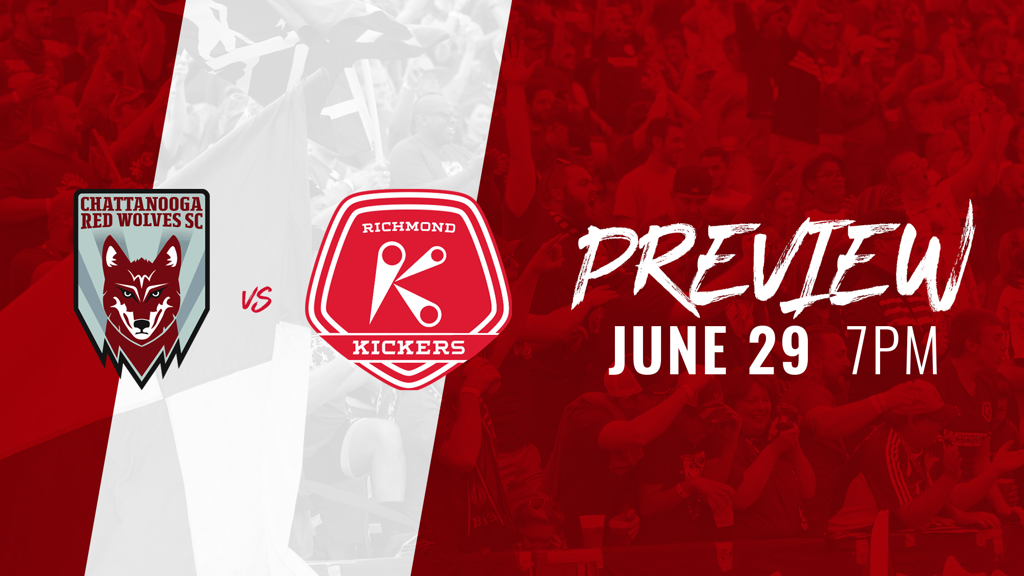 This match will be the third of four meetings this season between the Kickers and Red Wolves SC. After the first two matches, the series is tied up with a win apiece, both at City Stadium. Mutaya Mwape whipped in the ball for Joe Gallardo to net his third goal of the season in the 52nd minute for Richmond to pick up the victory on April 27. These two clubs met just two weeks ago, on June 15 with Chattanooga getting the best of the Kickers behind a 2-0 win. Amirgy Pineda and Sito Seoane each had a goal and assist in the second half to take all three points.

Richmond is the midst of a frustrating run of six matches winless, including last Saturday’s 0-1 road loss at South Georgia Tormenta FC. The Kickers and Tormenta were matched evenly throughout the match until the 83rd minute. Wahab Ackwei battled with Lucas Coutinho with the ball near the endline, and after a scuffle, the referee pointed to the spot to award a penalty to Tormenta. Marco Micaletto stepped up and converted the penalty, putting his shot to the right of Akira Fitzgerald, sending the keeper the wrong way. The Kickers were reduced to ten men after Conor Shanosky picked up his second yellow card in the 87th minute.

Chattanooga comes into this match on the heels of a dramatic 3-2 win at home over Greenville Triumph SC on Saturday. Steven Beattie netted the first hat trick in club history with two goals in the first half. Jake Keegan scored twice in the second half to level the score. Beattie completed his hat trick in the 77th minute to pick up all three points at home to remain unbeaten at David Stanton Field.

Richmond: The Kickers will seek to break a four-game scoreless streak as they take on Chattanooga for the third time this season. Forward Joe Gallardo (#10) leads Richmond in goals (4) and has more than double the shots (23) than the teams second-leading player in that category. Gallardo is one of only two players to start every game for the Kickers this season. Defender Eli Lockaby (#17), fresh off his Team of the Week nomination, recorded 7 recoveries and completed over 80% of his passes on Saturday night against Tormenta FC. Back on June 15, Lockaby completed nearly 75% of passes in the opponents’ half and had two interceptions in the home loss. Although he’s scored just one goal this season, captain Maxi Rodriguez (#21) shows his leadership on the field week in and week out. Rodriguez boasted a 91.4 pass completion percentage last week at Tormenta FC and recorded three interceptions along with two tackles in the road loss.

Chattanooga: The Red Wolves, undefeated at home this season, will look to stay hot as they have won three of their last four matches. Midfielder Steven Beattie (#10) continues to excel in USL League One play. Last week against Greenville Triumph SC, Beattie notched the first hat trick in franchise history for the Red Wolves which earned him USL League One Player of the Week honors for the second time this season. Beattie completed 88% of his passes, improving his season average to 70%. Beattie leads the team in goals (6) and shots (22). In the last matchup between Richmond and Chattanooga, Beattie had one shot on goal. Forward Conor Doyle (#22) might be the most active player on the field for Chattanooga. Offensively, Doyle is second on the team in shots (8) and has the fourth-most shots on goal with 4. Doyle has 16 clearances and is second on the team in interceptions (15). He’s won just under 50 percent of duels. Goalkeeper Alexander Mangels (#24) shutout Richmond back on June 15, stopping all four shots he faced. Last week against Greenville, Mangels allowed two goals ten minutes apart coming out of the half but held the Triumph scoreless in the final 28 minutes of action.