Kickers Downed at Home by Chattanooga 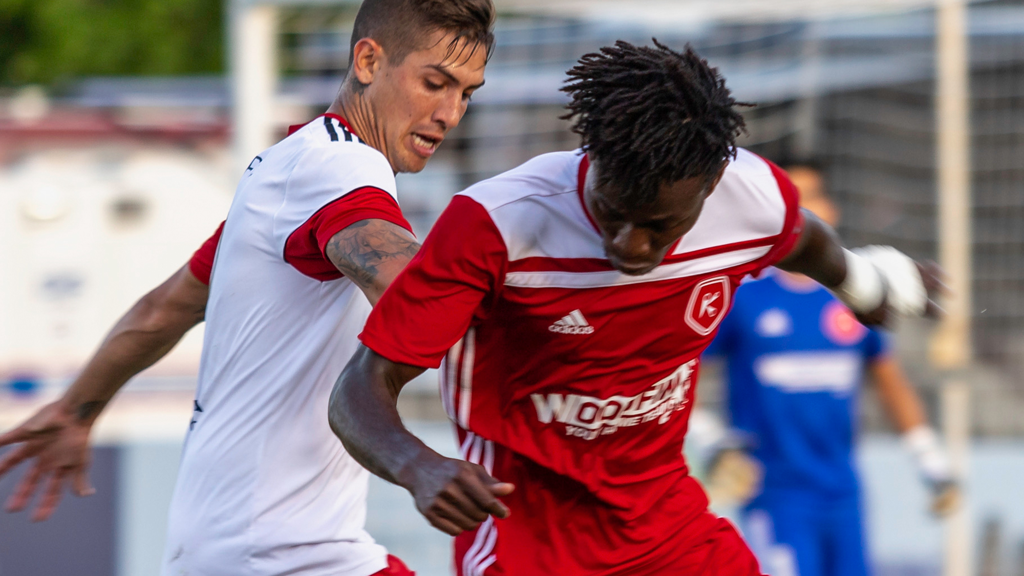 RICHMOND, Va. — (Saturday, June 15, 2019) — The Richmond Kickers (3-6-2) were defeated at home by Chattanooga Red Wolves SC (4-4-3) Saturday night. Amirgy Pineda and Sito Seoane each had a goal and assist to down the Kickers at City Stadium.

The Kickers had a chance to get on the scoresheet eleven minutes into the match. Eli Lockaby sprung Mutaya Mwape on a run into the Chattanooga box. Mwape looked to whip the ball in from the endline trying to get the ball in front of goal, forcing Mangels off his line for the stop.

A set piece for the Kickers  in the 17th minute was denied by the Red Wolves keeper. Maxi Rodriguez looked to play a ball out wide for Mutaya Mwape as Ualefi slid in for a late challenge to set up the free kick. Joe Gallardo stepped up and put his kick on frame. Alex Mangels managed to come up with the save and prevent the goal.

The crossbar came to the rescue for Richmond in the 22nd minute. Vangjel Zguro picked up control of the ball on wide on the left flank. He managed to get a cross into the back post for Conor Doyle to hit with a diving header. The shot hit off the crossbar as the Kickers cleared the ball out of danger.

Mutaya Mwape had a shot that Alex Mangels needed to come up with a save in the 33rd minute. Conor Shanosky sent the ball up the right wing for Eli Lockaby. The VCU product took a touch back to get away from his defender and lay the ball off for Mwape. Taking a touch, the Zambian went for the shot towards the near post just as Mangels dove to his left to make the save.

Just before halftime, the Kickers nearly snatched the lead. Maxi Rodriguez switched up the play to get the ball out to Joe Gallardo on the right wing. Gallardo snuck in a cross to Dennis Chin making a near post run as the forward put his shot just on the wrong side of the post.

Chattanooga broke the deadlock in the 63rd minute. Sito Seoane got in behind the Kickers backline making a run up the left wing. He stopped his run with Wahab Ackwei pressuring, giving himself enough space to play the quick pass for Amirgy Pineda. He chipped his shot just inside the far post for the opener.

Six minutes later, Joe Gallardo looked to level the score for Richmond. Scott Thomsen played the ball forward for to Gallardo at the top of the Chattanooga box. He cut across the Red Wolves 18 and launched a shot on target, with the Chattanooga keeper going for save.

Red Wolves SC doubled their lead in stoppage time. A free kick for Chattanooga was taken quickly by Sito Seoane as he played a light touch to Ualefi. He fed the ball up the field for Amirgy Pineda, who just took a touch for Seoane making a run towards goal. Getting around a challenge from Ackwei, Seoane went for the shot at a tough angle getting past Akira Fitzgerald and into the far post netting for the second goal of the night.

The Kickers hit the road for two straight matches on the road, with their first trip down to Erk Russell Park to take on South Georgia Tormenta FC Saturday, June 22 at 8:00 p.m. Next up, the Kickers will make the trek to face Chattanooga the following Saturday, June 29 at 7:00 p.m. This game will be available on WTVR CBS 6.3 (Comcast 206, Verizon FiOS 466), along with both matches being available to stream online on ESPN+. Stay up to date with all of the Kickers news at RichmondKickers.com.