Gates Open at 5:30PM for Summer Fest; Kickoff at 7PM 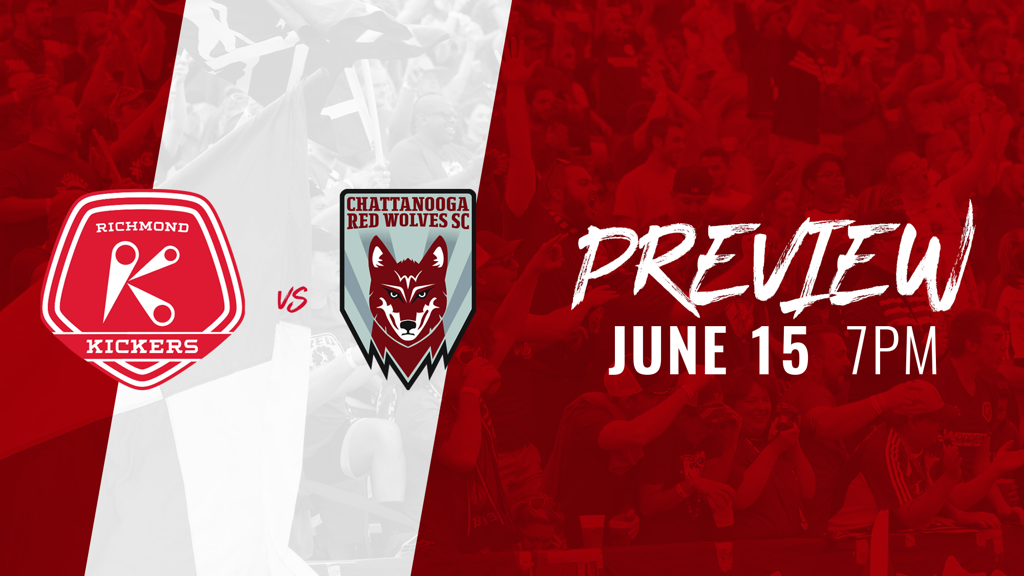 This match will be the second of four meetings with Red Wolves SC for the Kickers. Richmond has the edge so far this season, following a 1-0 win at City Stadium back on April 27. Mutaya Mwape whipped in the ball for Joe Gallardo to net his third goal of the season in the 52nd minute for Richmond to pick up the victory. These two clubs will meet in just two weeks, this time at David Stanton Field in Chattanooga. The Kickers final road trip of the season will close out the series this season in Chattanooga on September 28.

Richmond will return to City Stadium after earning a road shutout and picking up a point in a 0-0 draw at FC Tucson. Akira Fitzgerald made two massive saves, along with a late block from Wahab Ackwei to preserve the fifth shutout of the season, also ending a three match losing streak. Both players were recognized this week following the performance, being named to the USL League One Team of the Week for Week 11.

Chattanooga had an unplanned week off after their road match at South Georgia Tormenta FC was postponed due to severe weather. Red Wolves SC were last on the field June 1 to host Toronto FC II, as the teams battled to a 2-2 draw at David Stanton Field. Conor Doyle put Chattanooga ahead in the 38th minute to take a 1-0 lead into halftime. Toronto jumped ahead after goals from Shaan Hundal and Jacob Shaffelburg erased the Red Wolves first half lead. Colin Falvey struck in the 83rd minute to pull Chattanooga level and salvage the point at home.

The Kickers hit the road for two straight matches on the road, with their first trip down to Erk Russell Park to take on South Georgia Tormenta FC Saturday, June 22 at 8:00 p.m. Next up, the Kickers will make the trek to face Chattanooga the following Saturday, June 29 at 7:00 p.m. This game will be available on WTVR CBS 6.3 (Comcast 206, Verizon FiOS 466), along with both matches being available to stream online on ESPN+. Stay up to date with all of the Kickers news at RichmondKickers.com.

Richmond: Forward Joe Gallardo (#10) is one of two players for the Kickers who has started all 11 games this season. Gallardo leads the team in goals (4), shots (18) and shots on goal (13). In the Kickers’ last contest with Chattanooga on April 27th, Gallardo was credited with scoring the lone goal in the game, leading the Kickers to a victory in the first ever meeting between the two clubs. Defender Conor Shanosky (#5) continues to lead the Kickers on defense. He will look to build on last week's game in Tucson where he completed 90 percent of his passes and had two tackles and two clearances in the 0-0 draw in the desert. After being named to the USL League One Team of the Week, goalkeeper Akira Fitzgerald (#1) will look to shutout the Red Wolves once again on Saturday, as he did in April. Fitzgerald has posted back-to-back shutouts just once this season and did not allow a goal last Saturday in Tucson. He also leads the league with 34 saves and is second in clean sheets with five.

Chattanooga: Forward Éamon Zayed (#12) leads the Red Wolves in goals (4) and is second on the team in shots on goal (6). The 35 year-old Dublin, Ireland native signed with Chattanooga in October 2018 after spending his previous two seasons with the Indy Eleven under current-Chattanooga head coach Tim Hankinson. Zayed was Indy’s leading goal scorer, notching 27 goals in 60 contests. Midfielder Steven Beattie (#10) is the offensive leader for the Red Wolves. Also from Dublin, Beattie leads the team in shots (17) and shots on goal (10). Beattie is one of four Red Wolves who has started all 10 games this season and he has logged the fourth-most minutes on the team. In the last contest between Richmond and Chattanooga, both Zayed and Beattie were held to just one shot each, however, neither shot was on goal. Goalkeeper Alex Mangels (#24) is in his first season with the Red Wolves and has three clean sheets in 10 starts this season. The Lafayette, California product joins Chattanooga after spending the 2018 season with Portland Timbers 2. Mangels has conceded 15 goals on 48 shots this season.