Ackwei, Fitzgerald Named to the Team of the Week 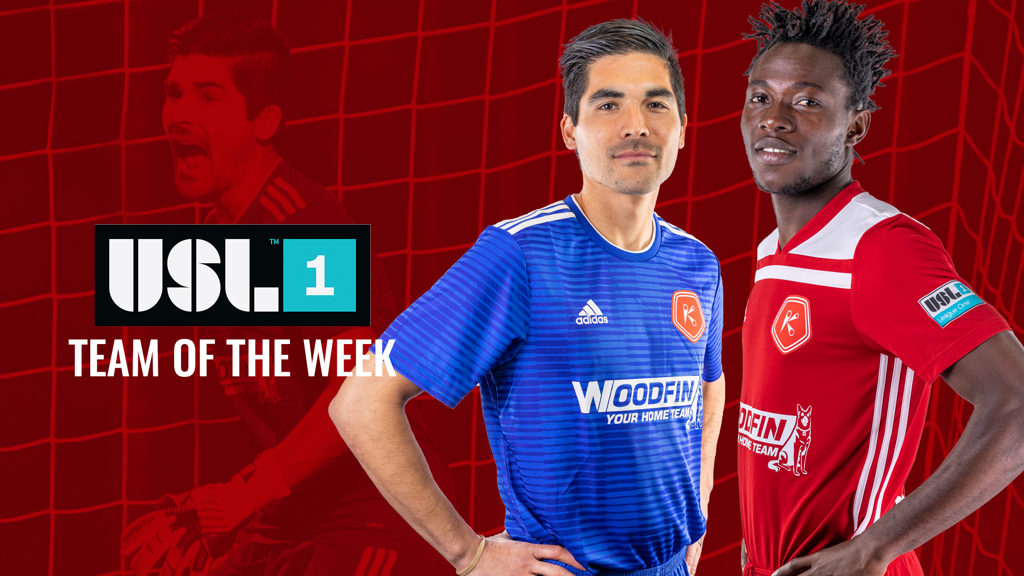 RICHMOND, Va. – (Tuesday, June 11, 2019) – USL League One announced on Tuesday that defender Wahab Ackwei and goalkeeper Akira Fitzgerald have been named to the Team of the Week for Week 11 of the league’s inaugural 2019 season.

Ackwei is making his fourth appearance on the Team of the Week after three interceptions and six clearances as the Kickers took a point on the road at FC Tucson Saturday night. The Ghanian also made a vital block in stoppage time to hold on for the club’s fifth shutout this season.

Fitzgerald has been named to the Team of the Week for the first time this season. The veteran goalkeeper made two dramatic saves to preserve the fifth shutout, plus recorded a 59.5% passing accuracy on 37 passes.

The Kickers are back at City Stadium this Saturday night to host Chattanooga Red Wolves SC as well as Summer Fest, presented by Bounce 2 the Moon. The party starts at 5:30 p.m. with Happy Hour specials for the first 30 minutes on craft beer on tap, RVA food trucks, live music from Spiderkelly, plus water slides, inflatables, face painting and more. Tickets are available now at RichmondKickers.com.

USL League One Team of the Week - Week 11

GK – Akira Fitzgerald, Richmond Kickers: Fitzgerald recorded a pair of standout saves and two catches to earn his side a point on the road against FC Tucson on Saturday night.

D – Terique Mohammed, Toronto FC II: Mohammed continued his excellent recent form as he made 11 recoveries, completed 47 of 53 passes and recorded an assist in TFC II’s 3-0 win against Lansing.

D – Lamar Batista, FC Tucson: Batista won 5 of 7 duels, 2 of 3 aerials and completed 61 of 72 passes in a composed performance at the center of Tucson’s defense in its 0-0 draw against Richmond.

D – Patrick Bunk-Andersen, Toronto FC II: Bunk-Andersen won 3 of 3 aerials and recorded nine recoveries in addition to his goal in the Reds’ 3-0 victory against Lansing.

D – Wahab Ackwei, Richmond Kickers: Ackwei put in a strong defensive shift for the Kickers as he recorded 10 recoveries, three interceptions and six clearances in Richmond’s 0-0 draw with FC Tucson.

M – Thiago Souza, Orlando City B: Souza led OCB with a goal and assist, also hit the woodwork and recorded five recoveries while completing 14 of 18 passes in his side’s 2-1 victory against Madison.

M – Jamael Cox, FC Tucson: Cox had a solid display in FCT’s midfield as he completed 22 of 27 passes, made 10 recoveries and won 5 of 9 duels in his side’s draw with Richmond.

M – Matthew Srbely, Toronto FC II: Srbely was consistently active in the attacking half for Toronto as he completed 30 of 35 passes, made three key passes and recorded one assist in the Reds’ victory against Lansing.

F – Rafael, Orlando City B: Rafael had another tidy game in attack for OCB, scoring once and completing 12 of 14 passes to link play in the club’s 2-1 win against Forward Madison FC.

F – Jordan Perruzza, Toronto FC II: Perruzza had a positive impact off the bench for the Reds against Lansing, completing 7 of 8 passes and winning 3 of 4 duels and 2 of 3 aerials while notching the side’s third goal of the game.