Kickers Earn Point on the Road at Tucson 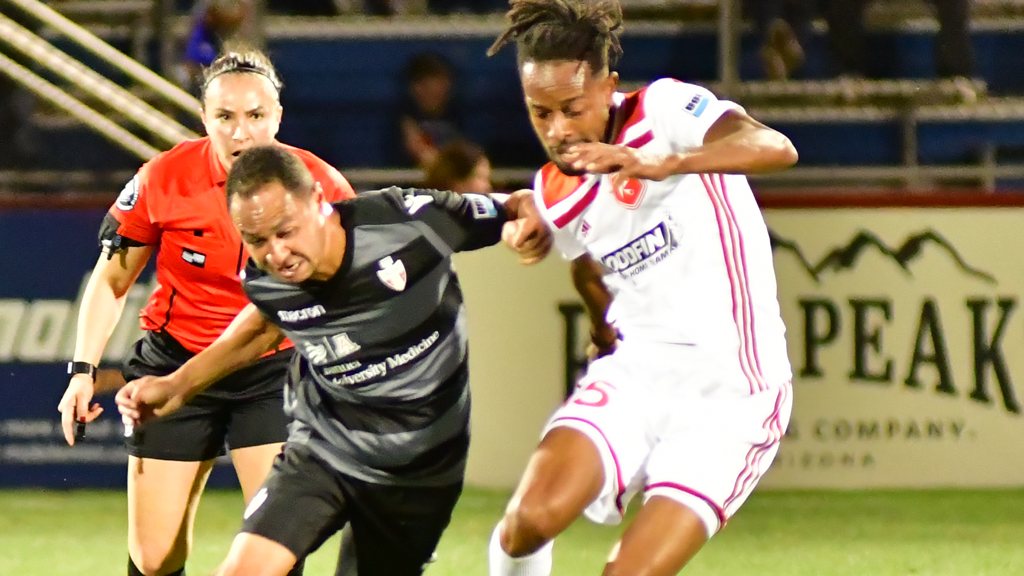 TUCSON, Az. — (Saturday, June 8, 2019) — The Richmond Kickers (3-5-2) battled to a scoreless draw on the road at FC Tucson (3-4-3) Saturday night at Kino North Stadium. Akira Fitzgerald made two saves to earn his fifth shutout of the season.

Four minutes into the match, the Kickers nearly created their first chance. Joe Gallardo picked up control in the center of the field. As he made his run, Gallardo got a touch on the ball to put it at the feet of Greg Boehme. He quickly got it out wide on the left for Scott Thomsen. The defender whipped in a cross trying to pick out Dennis Chin at the back post as Lamar Batista blocked the cross for the Tucson keeper to come out and grab.

Six minutes later Mutaya Mwape forced a save out of Phillip Ejimadu. Greg Boehme switched up the attack sending the ball out on the right flank for Mwape. With three defenders in his way, Mwape cut across the top of the Tucson box and let a shot rip. Ejimadu came up with his first save of the match to keep the Zambian off the scoresheet.

Dennis Chin had shot blocked in the 19th minute. Conor Shanosky got the play going from the Richmond box, going straight up the center of the pitch to Nick Retzlaff. He took a touch to move the ball up for Greg Boehme. He broke free of his defender to slot the ball to his left for Chin. The Jamaican looked for a near post shot as Kyle Venter slid in at the last second for the block.

Akira Fitzgerald was called into action in the 20th minute for a massive save. Kyle Venter found space up the right wing. He went for the cross to pick out Jordan Jones at the top of the 18. His header was heading on frame when the Kickers keeper leaped to push the shot over the goal.

The crossbar denied Joe Gallardo in the 26th minute. Fighting in the corner on the right side, Dennis Chin fought to get around Lamar Batista and found Gallardo with a cross. Controlling the ball, Gallardo quickly turned for the shot that deflected off Kyle Venter and thing pinged off the crossbar.

A last ditch save from the Tucson goalkeeper kept Richmond off the board in the 36th minute. Conor Shanosky played the long ball over the top for Joe Gallardo making a run to get in behind the Tucson backline. He took a nifty touch to shake off Kyle Venter. As he went for the shot, Ejimadu was there to make the stop.

Three minutes into the second half, Mutaya Mwape looked to create the chance for Richmond to get on the board. Dennis Chin won the ball off Andrew Wheeler-Omiunu and made the quick pass to Maxi Rodriguez. He continued moving the ball out to the right wing for Mwape as he made a run to the endline. Mwape sent the ball across the face of goal, but there was not a KIckers player there to get a touch on it for a shot.

The offside flag came to the rescue for Richmond in the 60th minute. Off a free kick, Jose Terron found Lamar Baptista at the back post for a header back across goal. Jordan Jones looked to sneak the ball across the line as the flag went up for the offside call.

Maxi Rodriguez made a massive tackle in the 63rd minute to prevent any chance from Tucson. Luke Hauswirth slide to save the ball from going out of bounds and put it into space for Jordan Jones. As he made his run into the Richmond box, Rodriguez tracked back and slid in before Jones could think about going for the shot.

Tucson needed a last second tackle to keep Joe Gallardo from getting on the scoresheet in the 79th minute. Luke Pavone won the ball off Kyle Venter and fed the ball up the field for Eli Lockaby. He cut back to get the ball back to Pavone, who worked the ball through Retzlaff and over to Joe Gallardo. As he went for the shot, Venter came through for the block.

An acrobatic save from Akira Fitzgerald in the 85th minute kept the shutout alive for Richmond. Andrew Wheeler-Ominunu sent the ball out to Luke Hauswirth making a run up the right wing. He went for the cross in to Roy Abergil, who got enough on the ball to put it on frame. Fitzgerald leaped through the air to punch the ball away.

Heading into stoppage time, Wahab Ackwei came up massive to preserve the shutout for Richmond. Eirk Virgen floated in a free kick that pinged around. The ball rolled out to Raheem Somersall, who went for the one time effort. Ackwei got his body in the way of the shot to head the ball over and out of danger.

The Kickers will return to City Stadium next Saturday night, June 15 for Summer Fest, presented by Bounce 2 the Moon. The party starts at 5:30 p.m. with happy hour specials on craft beer, water slides, inflatable, face painting and more! Then, get loud with the Red Army when the Kickers take the field at 7:00 p.m. to take on Chattanooga Red Wolves SC. Tickets and more information can be found at RichmondKickers.com.